Home Social Opinions SRK Didn’t Spit On Lata Mangeshkar’s Remains As Per Rumours, He Did... 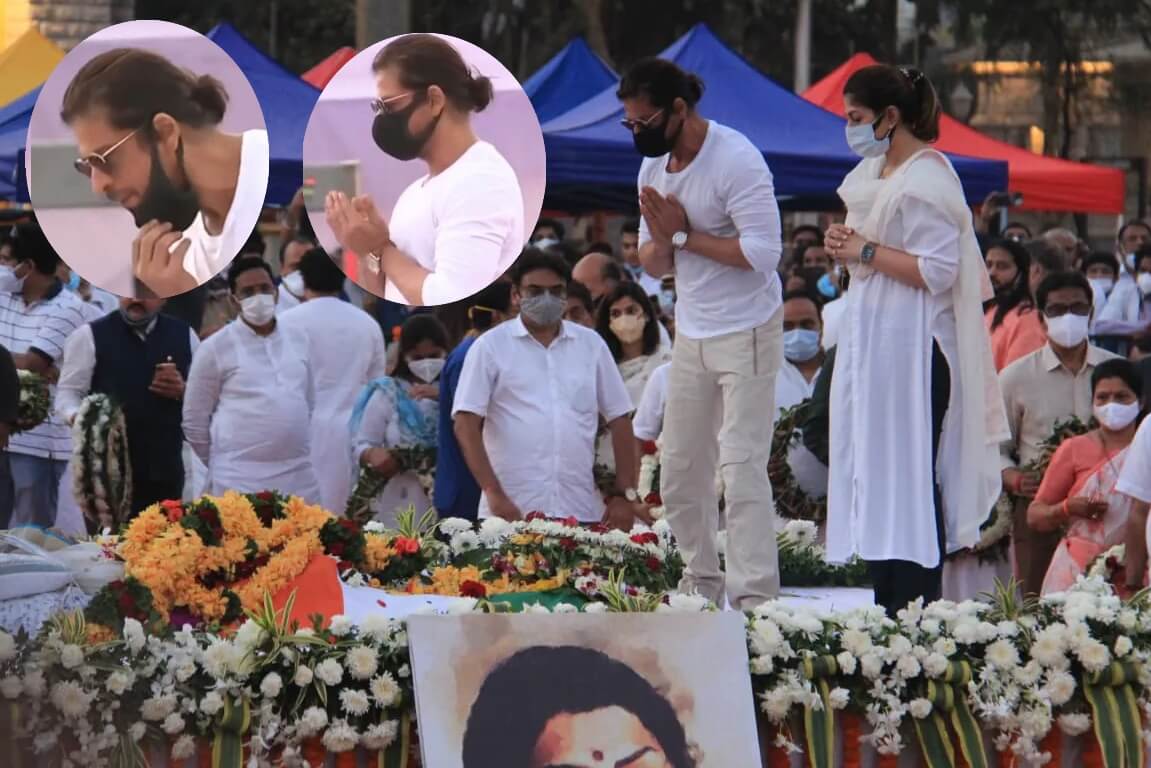 The world lost an inspiration in almost every way when news came out of the passing of Lata Mangeshkar. The person titled ‘Nightingale of India’, ‘Queen of Melody’ and the one who has literally been considered as one of the faces of Indian music departed from this world on Sunday morning, 6th February 2022.

News of her ill health, contracting the COVID-19, and more were already known but many were expecting that she would make a recovery. Given the immense achievements that she had witnessed over her 92 years of life, the late Lata Mangeshkar was given a funeral with full state honours at the Shivaji Park in Mumbai with some of the most important people of the country attending it and paying respects to her.

However, in the midst of all this, a clip was circulating around of Bollywood actor Shah Rukh Khan and his manager giving their last respect to Lata ji’s mortal remains. The clip showed SRK offering dua and then pulling down his mask to give a light blow in the departed’s direction.

This was taken in a completely wrong way by several people who then posted about it online further spreading false or wrong information. Among these was the state in-charge of BJP Haryana, Arun Yadav who is believed to have been the first to make this allegation when he posted the tweet “Kya isne thuka hai (Did he spit)?” and a clip of SRK. BJP’s Uttar Pradesh spokesperson Prashant Umrao also tweeted the same thing writing “Shahrukh is Spitting!”

Some people, took immense offense to this action though as they felt he was ‘spitting’ on Lata ji’s remains which was further aggravated by some people and politicians even who outright accused SRK of spitting on Ms. Mangeshkar’s remains.

Obviously, people got swept up in all the false information and started to abuse SRK of desecrating Ms. Mangeshkar’s remains and how they want an apology from him, etc.

But, the reality is that SRK was not spitting at all, instead was carrying out an Islamic ritual of giving dua to the departed post which some Muslims blow slightly to make sure that the blessings reach the one intended.

SRK Was Not Spitting

When Shah Rukh Khan paid his respects to Lata ji’s last remains he held his hands in front of him and then after offering ‘dua’ he pulled down his mask and blew in the direction of the mortal remains.

This is reportedly a ritual in Islam where after a person’s death as a way to give respect a ‘dua’ is read and the blowing of air is supposed to ward off evil spirits and also make sure that the blessings go in the direction of the departed itself.

One user on Twitter explained that “SRK didn’t spit there. He blew, which is a common practice in Islam. Muslims do blow air from their mouth after reciting Ayats from Holy Quran. RWs are making issue out of nothing that too in the death of an eminent personality.”

As per a Muslim acquaintance, she explained

“Every time you recite a dua then you just blow around the place you want to. The significance of this practice is that if you recite a Holy verse and you are kind of blowing it on some part of your body then it is meant to say that that part will be protected.

In case someone is sick then you recite a certain verse from the Quran and then you blow around that part of the body and it means that part will heal. So it’s just a way to show respect and is a custom and is called ‘Dua Phookna’ in Urdu.

Spitting is the wrong thing to say here, since there is no saliva involved. It’s just that you are trying to pay respect and making it all sacred Islamically. Once we recite a Holy verse we blow it, it’s just a common thing.”

As a visual example, someone posted a clip from SRK’s film ‘My Name Is Khan’. In the scene Kajol and SRK who play an inter-faith couple are going about their morning routine where Kajol’s character is giving their son the aarti on the other hand SRK’s character is giving dua to both his wife and their son while doing the same motion that he did at the late Lata Mageshkar’s funeral.

“When someone dies, we go to their grave or funeral and say prayers to ensure that Allah blesses their future journey. There are some prayers that said at this point, such as the Surah Fatiha, and then people blow air.

There is no logical explanation behind why this is done but it has been a belief in people that blowing air will ensure the prayer goes from the mouth of the person reciting it to the person it is intended for. This practice is documented in books.”

A lot of people did jump on this and clarified the fake news, explaining what exactly SRK was doing and it was definitely not spitting or being disrespectful in any way.

Rubika Liyaquat’s tweet said, “It is not spitting. it is called reading Fatiha. It is blowing after saying prayers.”

The ironic thing is that after paying respects as per his own religion, Shah Rukh Khan also gave blessings to the departed as per Hindu rituals.

After dua he prayed in hindu style as well.. He is definition of real INDIA
Pure gold #ShahRukhKhan pic.twitter.com/D6iT2qRh07