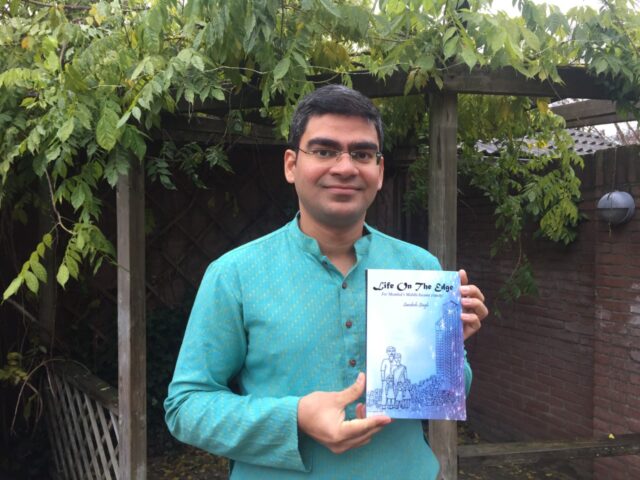 Sandesh Singh believes that every human is a hero in their own life. They have their story and their struggles which they conquer or attempt to overcome just like any other book or movie hero would do. This is what his novel, ‘Life on the Edge’ portrays.

‘Life on the Edge’ was published by Ukiyoto Publishing in October 2021 and had several good reviews from the editors and in-house book reviewers. The title promises a space in the OTT segment with further structuring and development of the characters.

The novel narrates the story of Tamhankars, a middle-class family with an average income.  The family of five, which includes Ganesh, his wife, Ramya, and their three daughters, Mrunali, Shruti, and Jaya; face adversities, suffering, and emerging through it just like the phoenix rises from its own ashes. Through them, the readers get a glimpse of life in a chawl, which goes beyond the common association of these housings with poverty and unsustainable life. Singh shows that the chawls aren’t only about filth and chaos, it is more than that. It is about the people who touch upon the ‘edges of life’ every so often and strive to live a better life, carving out their own paths. In this way, they portray that no matter what tragedy befalls, one’s hope must never fade.

Singh incorporates his belief by depicting that there isn’t always a single hero in the real world. Ganesh, the breadwinner, is a hero in his own way. Ramya, his wife, is a leading lady silently supporting and being the backbone of the family.

Mrunali and Shruti, are at the crossroads of retro and modern. They have high aspirations and a brave outlook towards life. Jaya is that hero who doesn’t let her perennial defect stop her from living her life.

The story traverses from the 80s to contemporary times and shows how the city of Mumbai changed and evolved to keep pace with modernity. It also references the tragedies that the city faced, the riots in 1991-92, heavy rains in 2005, train blasts in 2006, and how they impacted the middle-income families. This feat of capturing 30 to 40 years of evolution of the city of dreams has never been done before in writing. He has tried to give an up-close view of the city and readers are bound to get that immersive experience, whether they are living in the city or outside of it.

Even though Sandesh is an IT professional, engaged in transforming the functioning of organizations through the use of technology, he is a writer at heart who realized his dream of interweaving fiction with reality at the tender age of 11 and still holds his first poetry as his most precious literary treasure. He never let go of his dream as he continued penning down poems and stories through his academic years, as well as being the co-editor of the college magazine.

Meeting people, listening to them helps him gather their stories, their narratives and amalgamate them into his writing. Having toured many parts of the world, he has come across diverse societies and cultures. He draws inspiration from the people, from these cultures and societies, the way of life he has observed, and the experiences and emotions that he has collected; to chalk out his characters, to make them come alive on the pages.

Sharing his experience of writing this book, Singh says, “Being born and brought up in Mumbai, I have seen things changing in front of my eyes. While writing ‘Life On The Edge’, it was reminiscing those days, seeing and hearing the stories of friends and near & dear ones. It was as if living next to the characters, experiencing their journey of life, filled with unease, difficulties, pain, hurt, and also their triumph over life.

Some of the chapters were emotionally draining for sure. I could feel it but could not use my creative liberty to change it. I had to put it as is, how it would have happened in real life. It is satisfying to finally have this complete, a dream come true experience.”

As a writer, he strongly believes that whatever one writes, they should write it from the heart. He feels that it should be relatable at some level, the readers should feel the connection, and that way it will keep them hooked.

Currently, he is focused on his current novel ‘Life on the Edge’ and his efforts are to make this story reach as many people as possible. He has also started weaving another story that is vastly different from the first one but promises to show different facets of life.

Ukiyoto Publishing is a traditional publishing house with worldwide distribution of books and collaterals and digital and print media. For publishing opportunities, write to publishing@ukiyoto.com.