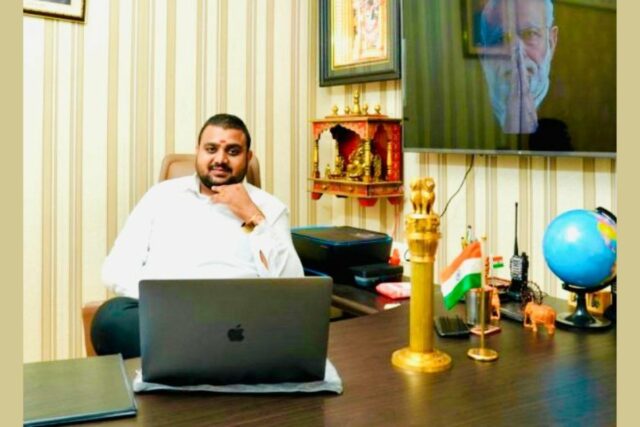 December 13: In a world of vivid dreamers, we are Proud to be addressing this honourable gentleman Dr. Sairam Radhakrishna Genji who has influenced millions of youngsters and created a swirlingly positive impact on the society. His works for the community has always been thriving. A man of humble nature and great vision bringing changes for a vividly better future.

Our honourable Dr Sairam Radhakrishna was born on first of May 1992 in Chennai, Tamil Nadu and his family belongs to the Hinducommunity. He is the eldest son of Mr. Radhakrishna Genjiand Mrs. Rajeswari Genji. His father was a business man by nature and mother a home-maker.

He has done his undergraduation BCom CS in DG Vaishnav College, Arumbakkam Chennai and he has completed his MBA in finance & marketing in the year 2015 at SRM university from Chennai respectively.

He then received an honorary Doctorate in Commerce from GLOBAL UNIVERSITY USA in the year 2017.

The essence of every intention of Dr.Sairam is to serve the needy & helpless people.To change the society, the change begins from within. To make the power reach from top to bottom Dr.Sairam entered politics and he is adored my wide spectrum of people for his efforts and good deeds of social service and welfare for the people.

Later in 2010 he joined the ruling party of Tamil Nadu the AIADMK under the leadership of Selvi J. Jayalalitha Amma.

He contributed greatly while he was in ruling party in AIADMK till 2017 then he moved on to BHARATHIYA JANATHA PARTY in 2018 under the leadership of Hon’ble PRIME MINISTER Shri NARENDRA MODI ji, where all his works for the society is tremendous.

Dr Sairam worked as a social worker during his youth, actively participating in movements supporting social reforms, Human rights, and democratic ideas. He was appointed as the State President of Anti Corruption Foundation of India in region of Tamil Nadu And then he was also Appointed as TAMIL NADU SLCC MEMBER IN FOOD CORPORATION OF INDIA in Ministry of Consumer Affairs, Food & Public Distribution, Govt.of India.

Under the blessing of Tirumala Tirupati Devasthanam CHAIRMAN Shri Y.V.SUBBA REDDY Garu, he has served a Various Occasions Distributing Anna Dhanam, Masks, Sanitizers at Chennai’s Tirupati Temple situated at T-Nagar, He also indulges in Preparations of Food and the Prasad ( Tirupati Laddu )and made it accessible for every devotee ever to visit Tirumala Tirupathi.

DR.Sairam has impacted many lives with his benevolence by hiring More than 6 ambulances for corona relief since April 2020 to Dec 2020 when COVID was at its peak, and it is surprising to know that Dr Sairam has helped around 131 people with their COVID Treatment from his own pocket & Circle. He took us by shock in the way he gelled with the working class.

Even In this current Nivar Cyclone situation where Chennai is fully Flooded with Water & Tears by Helpless People DR. Sairam along with Malepati Chakravarthy, BJP Vice President for Tamil Nadu have hired 14 food delivery trucks to deliver the food all over the Chennai for the flood relief.

Dr Sairam is also in good terms with all the Central Minister’s & State Official’s, he often consults them before taking decisions and through their support he helps and serves many people of in& Around Tamil Nadu.

DR.Sairam Radhakrishna also feels that all his achievements would not have been possible without the support of his Close friends Mr. Purshothaman, Mr. Guna Harshith, and Mr. Narendran Sundaramoorthy, he also feels that they play a major role in his Success and Achievements.

He also has been tirelessly travelling since the past 4 years for the benefit and the welfare of the society where he was an Active Participant in all Social & Service Activities.

And finally, DR.Sairam Radhakrishna feels his constant pillar of support is his mother Mrs. Rajeswari Radhakrishna Genji who has been through all his ups and downs, and he has no words to express his gratitude towards his Family.