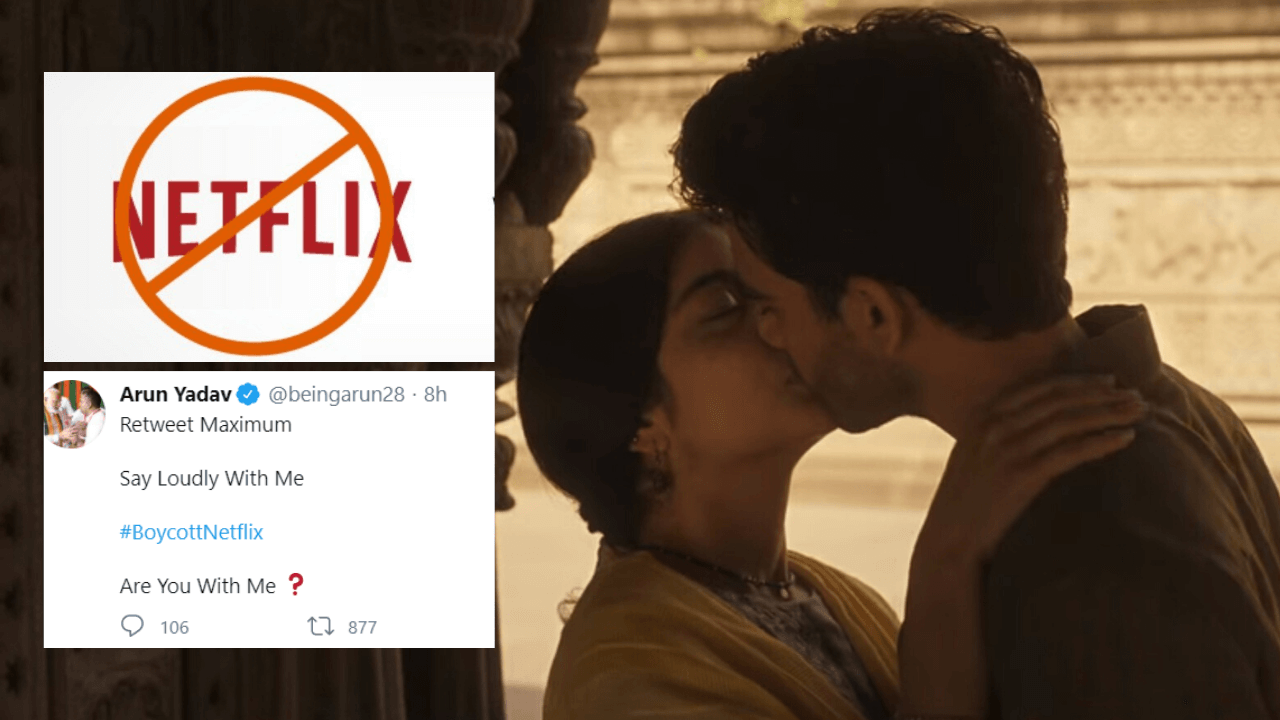 On Sunday morning, November 22, people started participating in the Twitter trend #BoycottNetflix, by afternoon it gained so much attention that it is number one trending in India right now.

The trend was likely started by BJP’s State IT & Social Media Head, Arun Yadav, who urged people to raise their voice against the platform early in the morning.

Why Do People Want To Boycott Netflix?

People are continuously sharing tweets and urging people to boycott Netflix by deleting the app for several reasons. The central issues are concerning the shows on Netflix, which people think are spreading anti-Hindu propaganda and promoting a culture that goes against the Indian ‘sanskriti’. 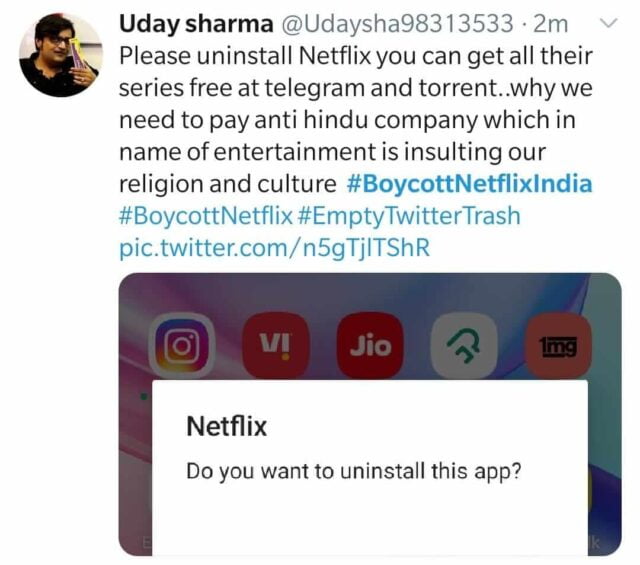 The show that has been most reprimanded is Mira Nair’s ‘A Suitable Boy’. And the current controversy over the show is about a particular scene in an episode where Lata, a Hindu girl played by actress Tanya Maniktala is seen kissing Kabir Durrani, a Muslim boy played by actor Danish Razvi inside a temple.

People are also questioning why the same scene was not shot in a mosque.

Some movies like Bombay Rose on Netflix, which depicts the love and struggle of Kamla, a Hindu girl, and Salim, who is a Muslim, is also being criticized as people are accusing it of promoting ‘Love Jihad’ and anti-Hindu sentiments because Kamla’s parents were Hindu fanatics who tried to stop their marriage. 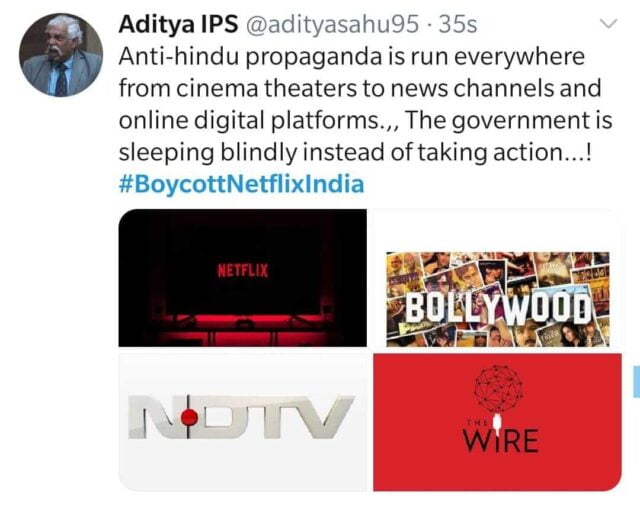 Other series that are not on Netflix but other streaming platforms like Patal Lok, Sacred games, X.X.X uncensored, Code M are also being trivialized for being ‘anti-Hindu’ because they ‘promote vulgarity’. 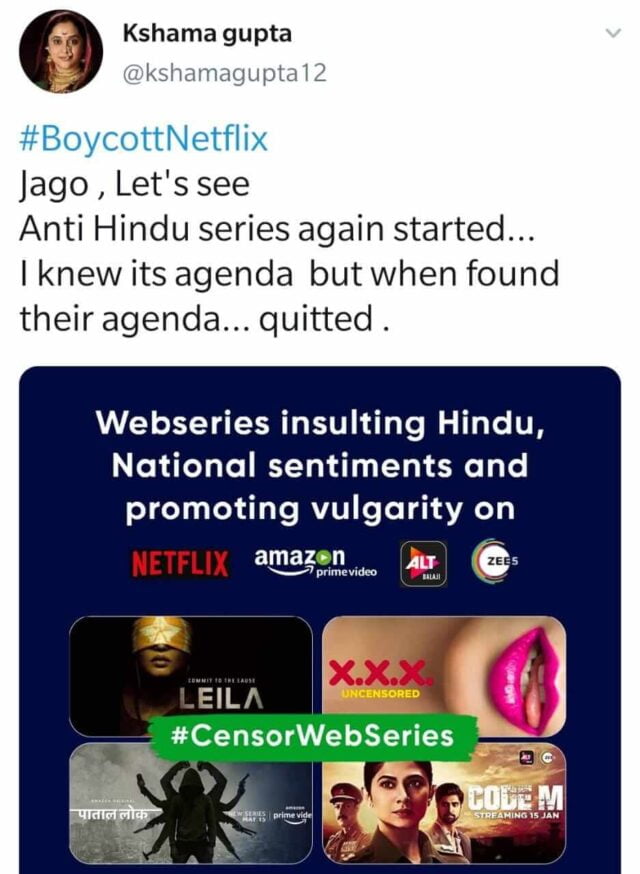 A few weeks ago, popular streaming platforms like Netflix, Amazon Prime, Hotstar came under the jurisdiction of the I&B ministry, and now people are demanding increased censorship on vulgar and explicit movies or series and a ban on movies and TV series that display Hinduism negatively.

It is Mira Nair’s adaptation of Vikram Seth’s novel, which was published in 1993.

It is set in the immediate post-partition era and deals with Hindu-Muslim relationships among other themes like marriage, adultery, affair, friendships, politics, etc.

Mira Nair has said that she wanted to remind the folks of this country about the pluralism that existed. She said in an interview, “The way he (Vikram Seth) shows the circus, the layering of where we come from — the Anglicised families along with the rural hinterland. My work right from the start has always been about that circus, about how we live in our country, cheek-by-jowl with those who have everything and those who don’t have anything, with so many different classes, religions, communities. That pluralism is what I loved and what really inspired me.”

This particular series has seen multiple controversies and criticism ever since its release on Netflix. People who have commented against the show explain their dislike for it by blaming the depiction of Hindus in the show altogether, criticizers think that it attempts to show Hindus in a bad light.

The relationship between Lata and Kabir is also being accused of a ‘Love Jihad’ propaganda.

BJP spokesperson Gaurav Goel joined the ‘Boycott Netflix’ trend, urging that if any platform deliberately insults Hindu gods and goddesses, discretely pointing towards the kissing scene in A Suitable Boy, then people should file a complaint with police under section 295A of Indian Penal Code.

If any OTT platform is delibrately insulting the Hindu Gods & Goddess, pls file the complaint with the police or local court under Section 295A of IPC. The law will take care of such offenders.

Another BJP leader, Gaurav Tiwari, has registered a case against Netflix for the same in Madhya Pradesh. He also shared a tweet announcing the same with a clip from Mira Nair’s show.

Rahul Mahajan, an Indian entertainer, expressed his displeasure over the scene. He tweeted, “A Muslim man kissing a Hindu woman during the Ram Aarti was ‘creative freedom’. But when a Hindu man and Muslim women would kiss in a mosque during Azaan, this creative freedom would go missing.”

Many people joined the trend ‘Boycott Netflix’ only to express feelings that contradict the aim of this trend.

Twitter users were quick to point out that the kissing scene is not ‘anti-Hindu’ as many people claim and that many Hindu temples have carvings and statues that are explicit. 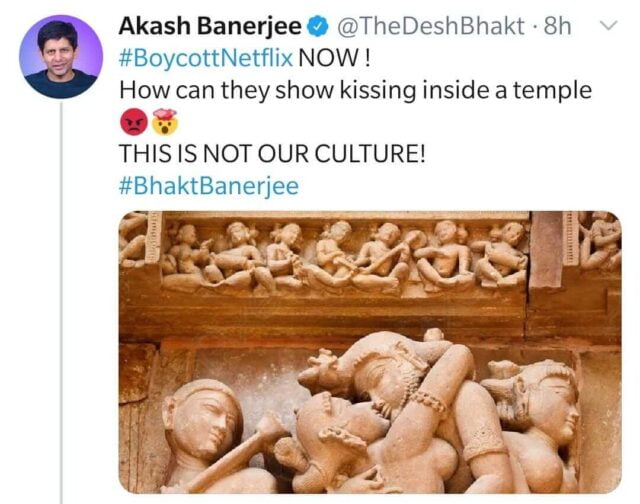 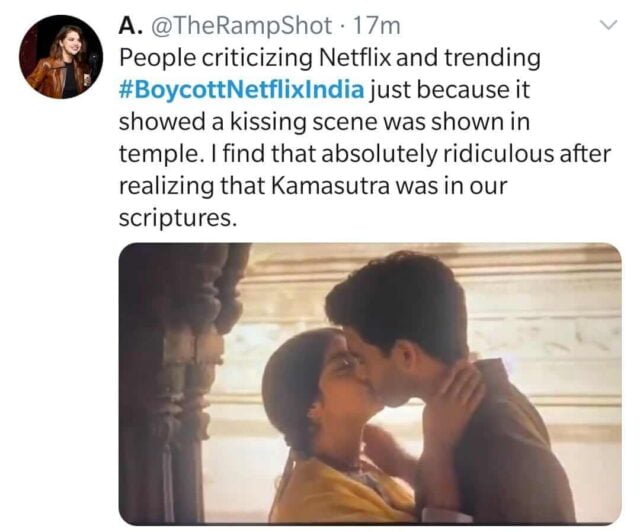 Other people have simply expressed their dismay by making a joke of this trend by laughing at the increased intolerance in India. 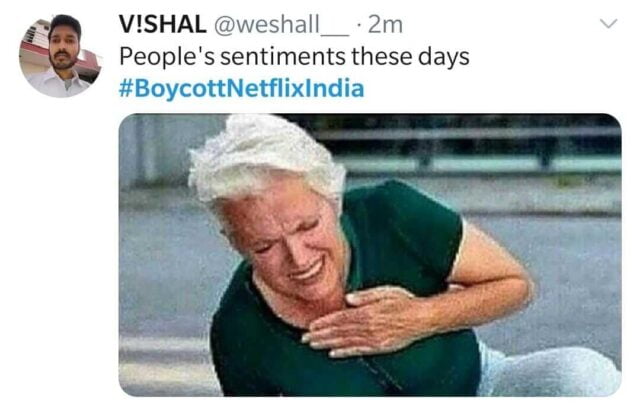 People have also made memes on the ‘boycott culture’ that we are witnessing recently. 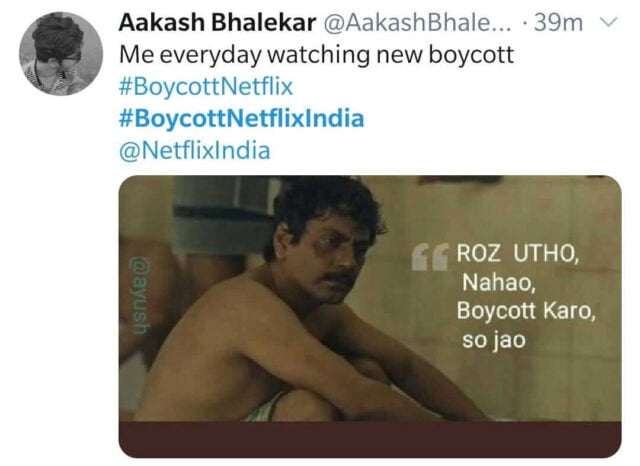