While the world celebrated New Year’s Eve with newfound optimism and left the coronavirus-tainted 2020 behind, a hilarious incident in Pakistan has left Twitterati laughing out loud.

A man in Peshawar, Pakistan, was arrested last night for wearing a ‘wolf mask’. Before you wonder out loud, there’s more to it. He was arrested on the grounds of intimidating people on the streets while wearing the mask.

An FIR was lodged by a resident and the man was promptly arrested the same evening.

While it may be wrong to scare civilians on the street, the man claims that he wore the mask for prevention from the virus. He stated that he was wearing it in lieu of the government’s Standard Operations Procedures (SOP). 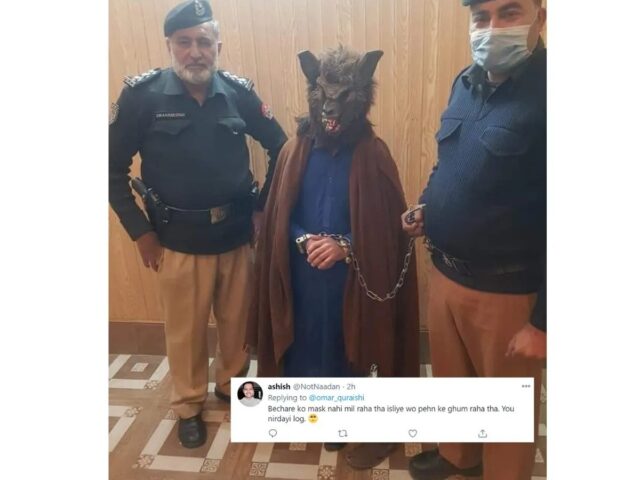 The man was on his motorcycle and was said to be ‘roaring’ and making noises at people passing by. Anyway, what started off as a prank led the man to celebrate his New Year’s Eve spending time in jail.

The Image Went Viral In No Time

The picture went viral as soon as it was uploaded due to its bizarre nature.

While every year some or the other incident goes viral during this time, several cities in India implemented a lockdown on New Year’s Eve. Many people had to stay at home rather than partying, as is popularly preferred.

In such a situation, people had their fill by offering several humorous takes on the picture and the man’s fate.

The image, where you can see the man being photographed handcuffed, along with Pakistani police officials, was even shared on Twitter by famous Pakistani journalist Omar Quraishi.

Police in the Pakistani city of Peshawar arrest a young man on New Year’s eve – for wearing a costume mask to scare people pic.twitter.com/sU9f1NDcAf

While many might claim it to be an example of intolerance in the country, Twitterati completely enjoyed themselves trolling the incident. Users also advised the man to check that it is not Halloween season.

Let him go, he's still on that halloween spirit. https://t.co/KVcsS8KjAd

Also Read: Why Did Anil Ambani Not Get The Success His Brother Mukesh Ambani Achieved?

Several others lauded him sarcastically by saying that he stuck to the COVID-prevention protocols. Twitterati was also quick to notice that ironically one of the police officers in the viral image was not wearing any mask in spite of the dire situation.

When your New Year's plans are busted. pic.twitter.com/nED88jD85w

So much respect for the police keeping the mask on him even after they’ve arrested him https://t.co/zVxNK5HOoM

He was reported to the police by a girl wearing a red riding hood https://t.co/COWVC1opkf

Bizarre incidents like these are actually amusing, especially during a pandemic.

Although, the larger question looms around the fact that while it normally takes a longer period of time to catch culprits who partake in more serious crimes, the law, in this case, was very prompt to take an action against the man.

Although no serious charges were pressed against him, the man was let go after spending some time in jail.

What are your thoughts on this incident? Let us know by commenting below!

Report Estimates Economic Loss To Delhi Due To Pollution To Be At Rs. 2.71 Lakh Crores In 2019