Delhi Minister for Women and Child development Sandeep Kumar’s sex tape surfaced this week. He is (was?) a member of the Aam Admi Party. Reaction of his party members after watching the sex tape: Rock On 2 poster released. According to the poster, there’s gonna be one chick between five musician guys. Now that’s going to be a hard choice. In fact, The hardest will win, obviously. A Jain monk addressed the Haryana Legislative Assembly completely nude. Vishal Dadlani criticised this and stated that religion and politics should be kept at distance. And that was the end. Of Vishal’s Political career. But let’s focus upon the nudity of the monk. He was modern enough to wear glasses and a French beard but not clothes. Way to go Religion, or rather, stupidity.

I can imagine the party’s manifesto filled will abrupt punny shayris. John Kerry, US Secretary of State, was stuck in traffic twice due to the infamous #DelhiRains. That is the first time a sportsman has altered the chemical properties of a medal without using any chemicals. lol Share this with your friends so that they could have a hearty laugh at something is which is funnier than your face. 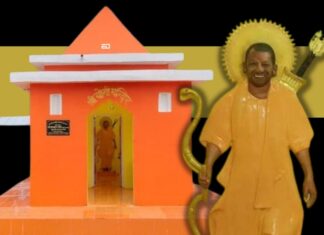 Chirali Sharma - September 28, 2022
The temple dedicated to Uttar Pradesh (UP) Chief Minister (CM) Yogi Adityanath was cause for much hype and interest. It was unveiled on 19th...