The #MeToo movement in India had been on a rollercoaster ever since Tanushree Dutta decided to come forward and in explicit detail once again recount her traumatising experience with Nana Patekar and other film producers.

After that, it was quite literally a domino effect where woman after woman was popping up all over standard and social media, each one coming out with their own #MeToo story.

Names like Vikas Bahl, AIB’s Gursimran Khamba and Tanmay Bhatt, Utsav Chakraborty, Alok Nath, Sajid Khan, and more were revealed to have been not as progressive in their actions towards women in real life as they claimed to be.

However, in a strange twist of events, the movement seems to have fizzled out a bit of its energy. In the past few days no news has come out of other sexual predators who could be amongst us.

Let us take a look at why the #MeToo movement in India seems to have gone a bit quiet:

While the start was an explosion of women finally coming out of the dark and sharing their stories, it was also apparently a little too much for some people.

I noticed a lot of my peers and acquaintances commenting on how ‘this all was getting too much’ and surely not all of these claims could be true against so many of the prominent people that were being accused.

#MeToo stories of victims were not only seen with a wary eye but also sometimes brushed aside as nothing but an attempt to cash in on the popularity of the movement.

However, the catch 22 here is that while the movement was gaining speed, everyone was thinking this is too much, but now that it has quietened down a bit people are assuming that the movement is dead or slowing down.

#2. Did We Scare Away Victims With Our Pessimism?

Sure, some of the women could have been trying to use the movement for ulterior motives, but that does not mean that all the majority would do so.

But it does feel like the pessimistic and inquisitive nature of the people could have scared away victims from not only sharing their stories, but also possible public investigation.

Because once they share their story, suddenly the victim or person sharing the story becomes open to the public eye and them digging around to really figure out if their story is false or true. 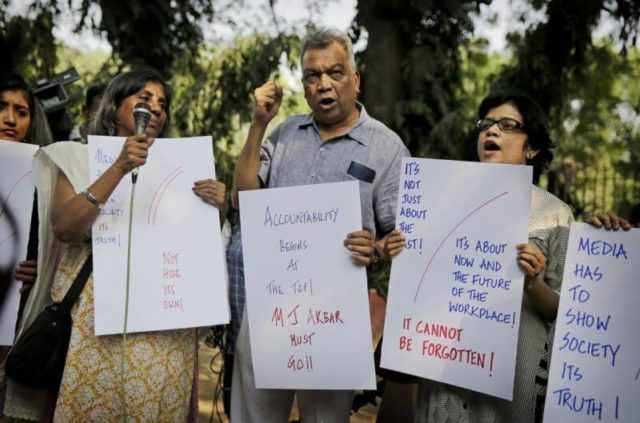 #3. No Big Names From Other Industries

So far, the Indian part of the #MeToo movement is largely limited to the entertainment and media sector. There was the case of MJ Akbar and his recent defeat and resignation from his post is certainly a big win for the movement, however, that is just one case.

It is still strange that no other allegations or stories have come out against people from other industries like corporate, law and most of all politics.

For the #MeToo Indian movement to have a bigger impact it is extremely important that names be revealed from the corporate and politics area considering the immense power play that happens there.

Another reason for the strange silence of this movement could be because of the recent bogus claims that were made against popularly known names.

One would be the anonymous girl against Varun Grover and the second would Ira Trivedi’s accusations against author Chetan Bhagat.

Both the claims were at the very least countered by the accused and revealed that the woman’s story might not be as true as the rest were assuming it to be.

This certainly put a question mark over the authenticity of stories told by the rest of the people participating in the #MeToo movement and could have made victims slightly hesitant to come out and share their #MeToo moment.

First Bogus #MeToo Allegation Comes Out And It Has Chetan Bhagat In It?