It instantly went viral especially since there was already a previous allegation against Bhagat for flirting and trying to ‘woo’ another woman on WhatsApp while he was married.

Trivedi in her article, explained how she met Bhagat almost ten years ago at the Jaipur Literature Festival (JLF), and Chetan being already such a popular author at that time, Trivedi was honoured to share the stage with him.

But the allegations that Ira has made against Chetan have been countered by the latter in a tweet where the language used by the former looks to be quite intimate.

What Is The Situation?

Apparently, at the JLF panel they met, Chetan asked Ira something like, “what do you do when men hit on you at book launches?”, to which she replied that, “I tell him that if he buys a 100 books I will kiss him, and if he buys all my books I will marry him.”

After some time had passed, Chetan asked to meet her and apparently tried to force himself onto her, when he got her to his room at the India International Centre.

As per Ira’s account, he tried to forcefully kiss her and when she tried to get out of it, he said that since he had bought and donated about 100 copies of her book, then as per her own words, he was entitled to a kiss from her.

Ira recalls how she continued being friends with Bhagat even after this incident but limited their interactions to only public places and slowly she became de-sensitised to his sexual and inappropriate remarks, thinking it was just, “Chetan being Chetan.”

According to Ira, Chetan also groped and harassed another friend of her while they were abroad, and when the #MeToo stories started coming, including the one about Bhagat, Ira was encouraged to share her story too. 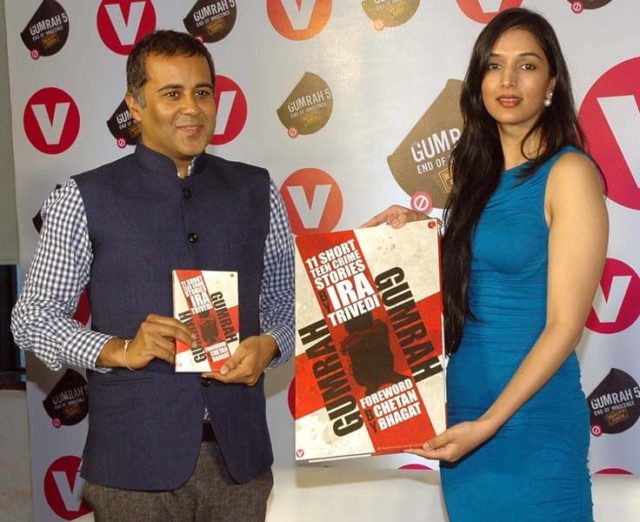 Read More: “Humne Toh Do Baar Mazey Kar Liye”; Said Nawazzuddin Acc. To Chitrangada When He Didn’t Stand Up For Her

How Chetan Bhagat Has Countered It

Today, on 15th October, Chetan Bhagat finally responded to the claims by tweeting a screenshot of a mail that Ira Trivedi had sent to him in 2013 that as per reports was flirtatious in nature.

So who wanted to kiss whom? @iratrivedi’s self-explanatory email from 2013 to me, esp last line, easily shows her claims from 2010 are false, and she knows this too. This mental harassment of me and my family has to stop. Please don’t harm a movement with #fakecharges #harassed pic.twitter.com/SWeaSCfHLd

According to Chetan, this is ‘self-explanatory’ of how ‘true’ Trivedi’s claims are and commented on the mental harassment these charges bring along with also how false charges can derail a good movement away from its original purpose.

He also mentioned that he launched one of Ira Trivedi’s book back in 2015/16 and questioned as to why someone would invite their harasser to be the guest of honour at their book launch.

Shame on media like @outlookindia who carried a fake charges story without even checking with me. They could have easily checked on YouTube that I launched her book in 2015/16. Who calls their harasser as chief guest for their book launch? Video here: https://t.co/g6uIOVLjeS

A person’s reputation is their most prized asset and takes a lifetime of work to earn. To have these motivated, fake attacks on me is abhorrent and the sickest thing a person can do. Please don’t support this kind of smear campaign.

To those who abused me last few days, hope you will do right by me now. Ultimately, is this movement about the truth or blindly supporting a particular gender? Please don’t let your biases make you believe things that are not true.

Annoyed by my revelations, more baseless, twisted attacks may come on me, through her friends, wellwishers &/or others. Neither obligated nor inclined to respond. Please don’t believe such nonsense. I may go silent on twitter to heal my family but I won’t be shamed or silenced.

I am not a vindictive person. More than anything I just want me and my family to be left alone and people to ignore fake charges. Love to all who supported me. I won’t let you down. This was my #MeToo story. Peace out.

To be honest, more than Ira or Chetan, this whole issue will be a jackpot for those opposing the #MeToo movement since the start. Pretty sure that the haters will be really happy who were in any case doubting the strength and genuineness of the #MeToo India movement.

But let us get some facts right, one of them being that no is absolving Chetan Bhagat of any wrongdoing immediately.

Bhagat’s tweets in no way nullifies the allegation made by Ira Trivedi since we still have to hear from her on the claims made by Chetan and put her case forward.

But, at the same time, this would be a good time to remember that any such mega movement of such a humongous size will most certainly have some bad apples and some exceptions which could and will use the platform for their personal benefits.

And exceptions are always there just like in the domestic violence cases where people could use such movements for ulterior motives, but that in no way takes away the seriousness and importance of the movement.

Only a visually impaired person can say that the #MeToo movement is bogus when clearly majority of the allegations seem genuine and frankly scary.

Also, in the end, it will be important for Ira Trivedi to justify her original claims given Chetan’s rebuttal today. Let the truth be out soon!

‘I’m Not Like Other Girls’: 4 Times That Feminist Women Belittle Others Without Realizing