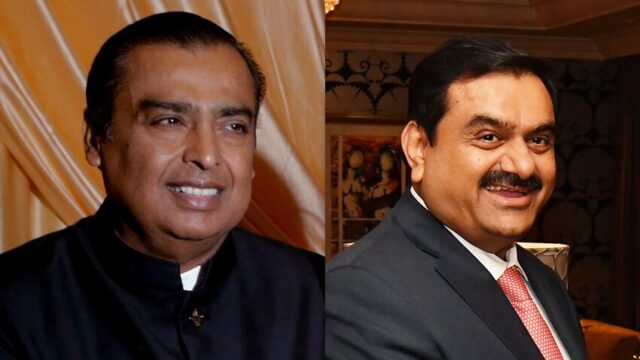 Corporates like Byju’s led by Byju Raveendran, Oppo, Vivo, NISSAN, Uber, Pepsi, the Adani Group led by Gautam Adani, Ambani-led Reliance, among others, have been active contributors and have had their fair share of investments and sponsorships in IPL and cricket

Cricket is not just a religion but an economy in itself in India.

Given the game’s influence on popular sentiments and emotions attached with national pride, several brands such as Byju’s led by Byju Raveendran, Oppo, Vivo, NISSAN, Uber, Pepsi, the Adani Group led by Gautam Adani, Ambani-led Reliance, among others, have been associated with the sport, particularly the IPL.

Celebrities from different walks have been associated with the game, Whether it is Bollywood stars, politicians or business tycoons and billionaires like Adani, Ambani, Uday Kotak, cricket aficionados are abundant in India.

We have a list of the top 5 cricket enthusiasts from India Inc and their contributions to this sport:

One of the richest bankers in the world, Uday Kotak, the founder and CEO of Mahindra Kotak Bank, is an avid cricket fan. Although, he had other ambitions while growing up, Kotak wanted to become a professional cricketer before an unfortunate incident led him to pursue business. 20-year-old Kotak was hit by a ball in the head when a fielder threw it back to the stumps. A surgery was later performed in time.

In the latter half of September 2020, his bank – Kotak Mahindra launched MyTeamCards – the Kotak Cricket edition range of debit and credit cards featuring striking team visuals of players, team logos, watermarks, and official team colors, making it a must-have for all passionate followers of the game as they cheer for their favourite team.

In 2010, Vijay Shekhar Sharma launched a mobile and DTH recharging company – Paytm that caught the digital generation’s attention as an eCommerce marketplace.

According to Shankar Nath, senior vice president, Paytm, “This is a young generation, an internet generation and we wanted to connect with them with scale and impact. The best way to do this we decided was by investing in sports – it is aspirational, content in real-time, and there is a huge affinity with the younger generation.”

Paytm partnered with the cricket World Cup held in 2015. “The (Indian) team reached the semi-finals and we saw that we gained a lot of traction as a result,” said Nath. The company has also tied up with IPL last season as an associate sponsor and the official partner of Mumbai Indians.

Billionaire Mukesh Ambani and his wife bought the team Mumbai Indians in 2008 for US$111.9 million. This made the couple’s hometown team the most expensive one in the Indian Premier League, the biggest franchise-based cricket tournament in the world.

The Ambani family has always been a fan of cricket. Mukesh’s wife Nita is a frequent fixture on the stands at most of the matches and even strategises with the team.

One of the richest men in the world, Gautam Adani owns the Adani Group and has expanded his business ventures in many diverse domains. Just like other business tycoons, both Ambani, Adani share a love of cricket.

The pavilion ends of the world’s largest stadium are sponsored by the duo – Adani, Ambani. Formerly known as Motera Stadium, it has a capacity of 1,32,000 spectators. While the south end of the pavilion was sponsored by Adani; Ambani,, sponsored the north end.

It is being said that just like Ambani, Adani is also planning to get hold of his own cricket team. In November 2020, the Adani Group and RPSG emerged as front runners to own additional Indian Premier League (IPL) teams.

Oxigen garnered a lot of attention when it got Sachin Tendulkar as the brand ambassador. Pramod Saxena, founder and chairman of Oxigen Services India, says, “Sports connect, particularly cricket in India, has the highest reach. When you associate with cricket, your chances of connecting with a large number of people exist in all age groups.”

That explains why Oxigen is a sponsor of the South African cricket team. “They have a heavy engagement in India – this bilateral series will be followed by the T20 World Cup next year,” explains Saxena.

From the year 2022, IPL will become a 10-team affair as BCCI has made a decision to auction 2 new teams – Ahmedabad and Hyderabad during the final phase of the event.