Kumbh is a religious event that takes place every three years, at different places. According to the Bhagavad Purana, Vishnu Purana and Mahabharata, Kumbh is held at places where droplets of nectar fell during the rift between Hindu Gods and demons.

The rift is termed as ‘Samudra-Manthan ‘, or the churning of the ocean, in pursuit of several elements, one of which was nectar.

Kumbh is recognized as a pilgrimage festival and people from all around the globe visit the holy event to witness its grandeur. Kumbh has also been inscribed on UNESCO’s Representative List of Intangible Cultural Heritage of Humanity.

Over the years, several men and women have given up their worldly life and accepted the life of a saint, however, throughout these years, the representation of transgenders amongst these saints remained inadequate.

Recently, the Kinnar Akhada, dedicated to the transgender community, was put in place to extend acceptability to transgender Hindu saints. 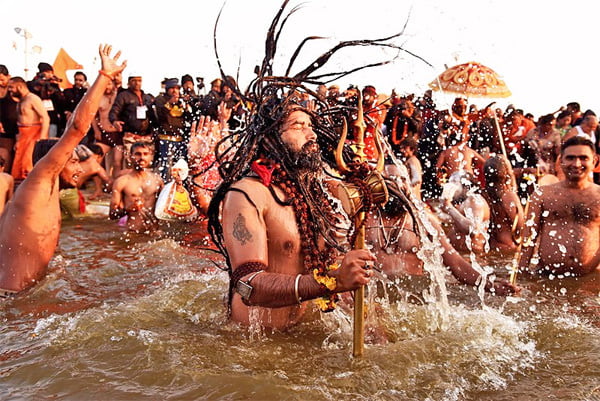 In Hinduism, Adi Shankaracharya founded the Dashnami Sampradaya and divided their aesthetics into Shastradhari (bearers of shastras/scriptures) and Astradharis (bearers of weapons).

He also established the thirteen Akhadas, including the Akhadas for the Naga (naked) monks who are Astradharis.

The Akhadas were established to safeguard Hindus and Hinduism from attacks and massacres by foreign rulers, like Taimur.

These Akhadas also provide for religious hierarchy amongst the monks and every three years, when Kumbhs are held at banks of various rivers, these Akhadas become a part of it and take holy dips in the rivers on prescribed dates of the royal bath.

The Kinnar Akhada was established to provide increased acceptance to the transgender community amongst society. In Kumbh 2019, the Kinnar Akhada participated in the religious processions and showcased themselves as a distinct organization.

Read Also: In Pics: Kumbh 2019 Has Started And Twitter Is Flooded With Pics & Tweets From Shahi Snan Day 1

In September 2018, the Indian Supreme Court pronounced a decision in favour of the transgender community, extending certain sexual rights to them.

Within the same month, Lakshmi Narayan Tripathi, who is the spokesperson of the Kinnar Akhada announced that they would be participating in the Kumbh 2019. However, the general acceptance of the Akhada was still inconsequential.

In the Kumbh 2021, which is currently being held in Haridwar, Kinnar Akhada has come out stronger than ever. At the start of the Kumbh, Kinnar Akhada participated in the inaugural procession, namely Peshwai, with one of the largest Naga Akhadas, the Juna Akhada.

Earlier, transgenders were prohibited from taking part in Shahi Snans and Peshwai. However, this has changed in the Haridwar Kumbh.

Along with the Juna Akhada, the Kinnar Akhada also participated in the royal bath on 11th March 2021. This Kumbh also marks the first time when the transgender community will be given equal rights to participate in religious rituals of seers, thanks to the Juna Akhada.

I was a witness of the Shahi Snan that took place at the event of Mahashivratri. I saw the processions myself and the procession of the Kinnar Akhada warmed my heart.

I could witness no discrimination, rather people of the Hindu religion stood bowing in front of the transgender seers, irrespective of their gender. This move of social acceptance is appreciable and emotionally moving, which makes us think that if God doesn’t discriminate on the basis of gender, who are we to draw the lines?

LivED It: I Visited Kumbh’19 And The Experience Was Amazing