Raksha Bandhan, meaning safety bond, is an auspicious occasion wherein Indian girls tie an amulet on the wrists of their brothers and in return get gifts in the form of material items and lifelong protection.

This festival has immense importance in Hindu culture. It is believed that Draupadi once tore a strip of cloth from her red sari and wrapped it around the bleeding wrist of Lord Krishna.

He was deeply moved by Draupadi’s kind actions and hailed her as his sister. They respected and admired each other. He even offered her protection when she was humiliated by Kauravas in public when her husbands gambled her away.

The Bhagavata Purana and Vishnu Purana talk about the beautiful, loving and supportive brother-sister relationship between King Bali and Goddess Lakshmi. The legend of Yamraj and Yamuna also offers a great mythological explanation for the origin of Raksha Bandhan.

An eminent historian Rana Safvi in her book, “City of My Heart” explained the story of Mughals celebrating Raksha Bandhan in honour of a Hindu woman.

Mughal Emperor Alamgir II in 1759 was ambushed and killed by the agents of his wazir Gazhi ud-Din Khan Feroze Jung – III. A Hindu woman discovered the corpse of the late emperor on a riverbank and kept him on her lap until further help arrived.

Later on, Shah Alam II, the successor of the late king, rewarded the woman and called her his sister. From that day, every year on Salona (Mughal name for Raksha Bandhan), that Hindu woman would visit the king and tie him a rakhi and receive gifts in return.

Read more: Why Making ‘Boycott #TheKargilGirl’ Trend On Twitter Is Not Enough To Kill Nepotism In Bollywood?

Recently, Safvi was ruthlessly trolled by the masses on Twitter for calling Raksha Bandhan a Mughal festival – a mistake she never committed.

It all started when a Twitter account by the name ‘True Indology‘ blamed Safvi for “spreading blatant ties about the origin of Raksha Bandhan”. The account supported his argument through a newspaper cutting that contained an excerpt from Safvi’s book, “City of My Heart”.

The article was titled “How Mughal Delhi Gave Birth to Raksha Bandhan“ which misled the audience.

When the article first got published, Safvi immediately contacted the editor of the Hindustan Times for correction. The article was republished with the headline, “How The Mughal Court Embraced Raksha Bandhan” to clear all misunderstandings.

“It was an error on the part of the publisher. The headline and the blurb were not written by me. The Mughals did not “bring” Raksha Bandhan to India, they embraced the festival. If anything, the story only highlights how Hindu traditions were often embraced by Mughal rulers,” a concerned Safvi told News18 in a telephonic interview.

A distressed Safvi tweeted, “Whenever I’ve written on communal harmony and amity (and from old sources) I’ve been hounded and trolled. I wonder why?”. 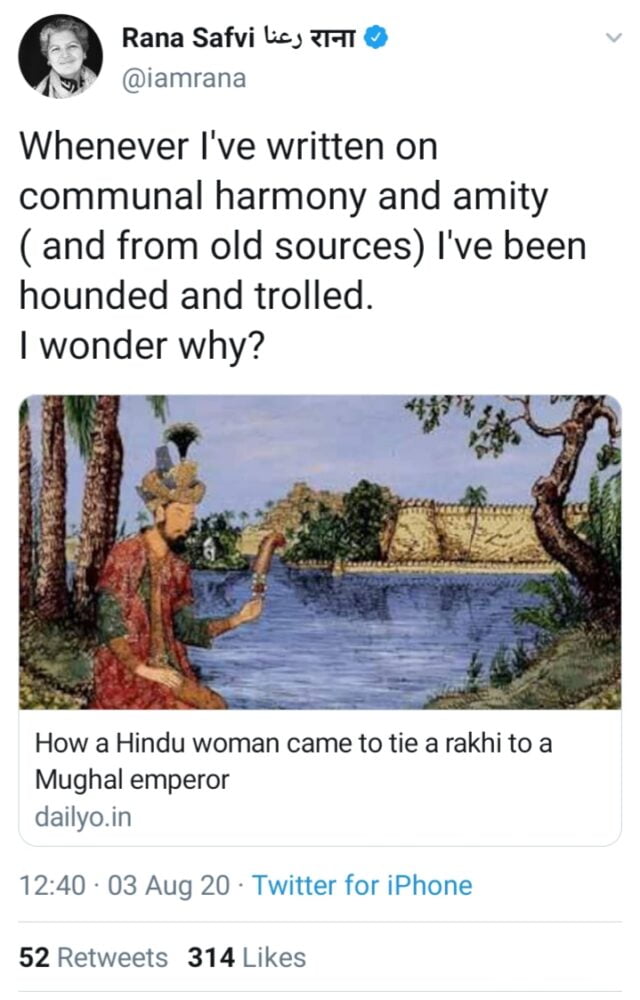 Despite all these efforts from Safvi’s side, people have not left her alone. Some are mocking her while others are using demeaning words to address this issue. Others are hating on Mughals or Muslims in general. 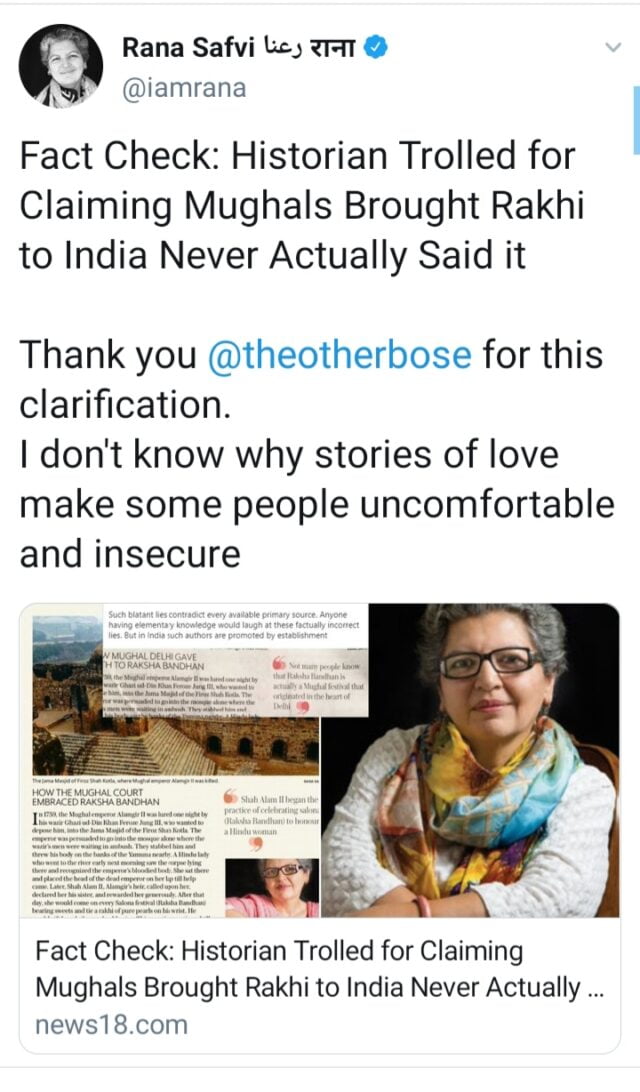 Safvi has taken a softer stance on this issue. She is correcting all the false information and ignoring all the hate directed at her on social media sites, unlike many other academicians.

This incident clearly shows that one should not post anything on social media sites without complete knowledge on the topic. Joining the hate train and bullying people on Twitter for fun is extremely insensitive.

It leaves the concerned person with deep mental and psychological wounds. Hence, we all must be responsible and research well before commenting on any issue to prevent us from hurting any individual unwittingly.

Herd Immunity Not An Effective Way Out Of COVID-19 Crisis, Says Govt.