Home Entertainment Why Making ‘Boycott #TheKargilGirl’ Trend On Twitter Is Not Enough To Kill... 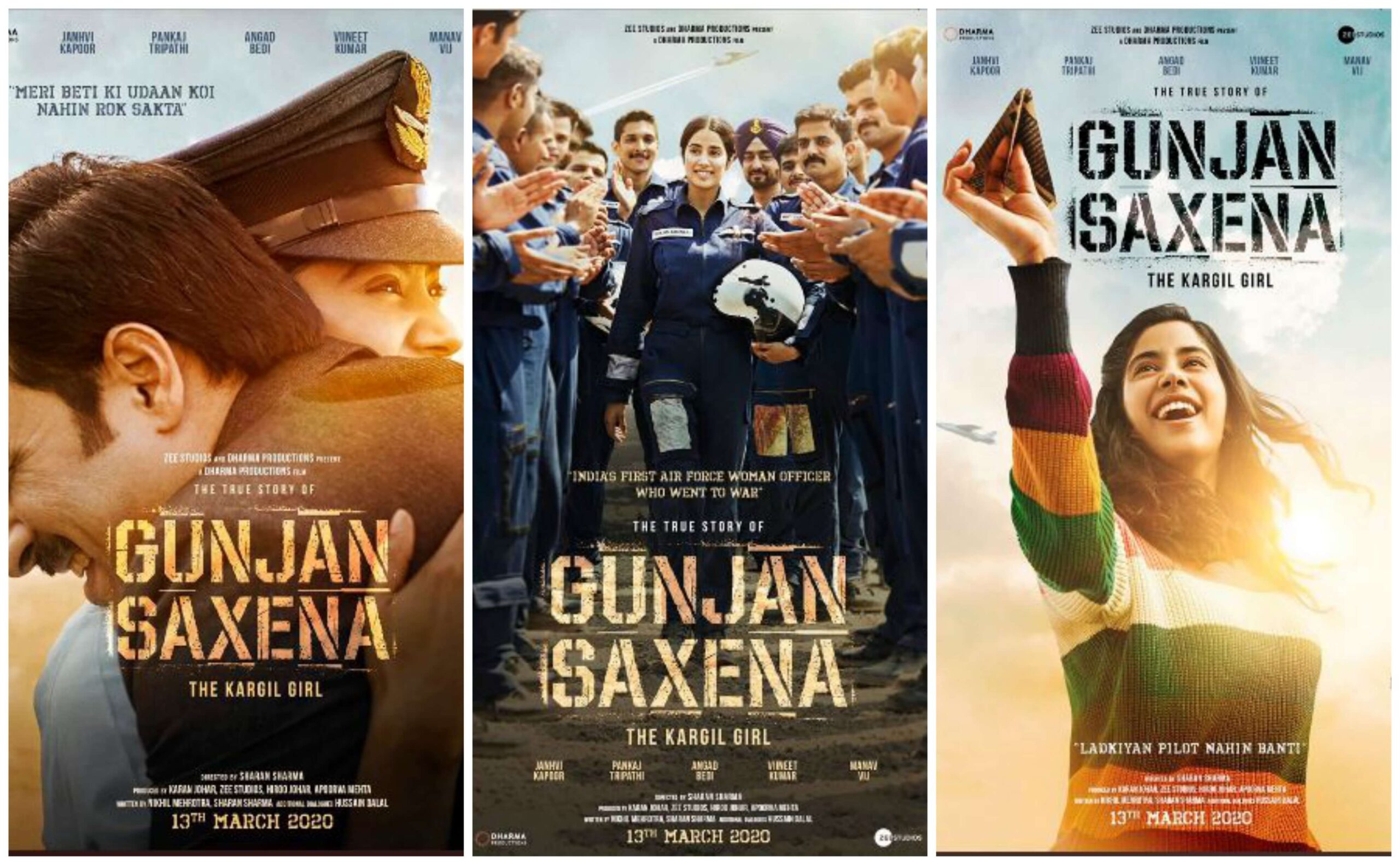 Sushant Singh Rajput’s death exposed the nepotism that has existed in Bollywood from its dawn. And even after 45 days of his demise, the government of India is still irresolute about the mystery of his death.

When Sushant passed away, people spilt out their truculence on the Bollywood Mafia. Karan Johar, Alia Bhatt, Salman khan, and every star kid got trolled brutally. Various campaigns were carried out on social media to boycott Karan Johar and other star kids.

In a recent development, #TheKargilGirl has been trending on Twitter for obvious reasons. The Kargil Girl is a movie based on the journey of Flight Lieutenant Gunjan Saxena: India’s first female combat pilot in the Kargil War. The film will be released on 12th August on Netflix. 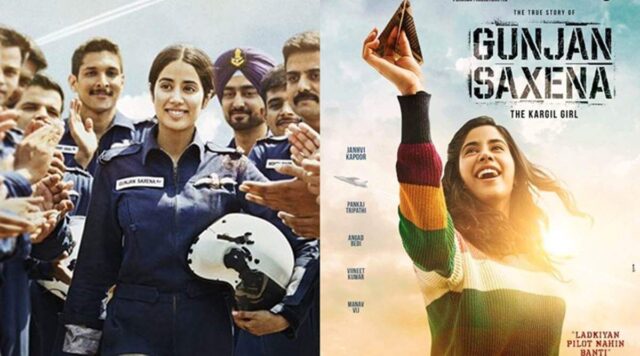 But many have decided to boycott the movie because Gunjan Saxena is played by Boney Kapoor’s daughter Jahnvi Kapoor. People are even asking to read her biography instead of streaming the movie. But is boycotting star kids’ movies enough to terminate nepotism from Bollywood?

In simple words, nepotism is favouritism. It is a practice where people having some power or authority favour their relatives and friends over outsiders (who might be better qualified). In Bollywood, nepotism has existed since forever but it was never before dealt with so vigorously. 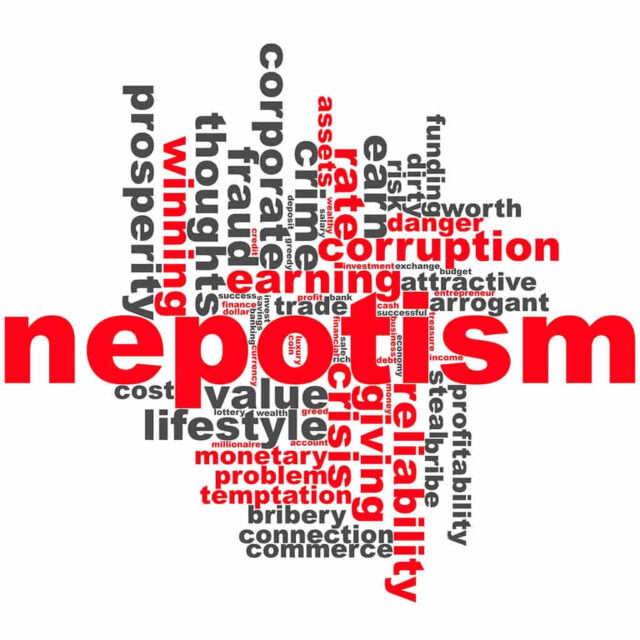 Alia Bhatt, Varun Dhawan, Shraddha Kapoor, Tiger Shroff, Sonakshi Sinha and many more entered Bollywood because of their fathers. Even in the 1990s, when Karishma Kapoor and Saif Ali khan made their debut, it stood clear that Bollywood is a huge ‘flag-bearer of nepotism’, in the words of actress Kangana Ranaut.

Actually, nepotism exists everywhere. A doctor would most probably push her son/daughter to be a doctor. In a family business, the son may take over the business and similarly, a politician’s son takes over his place. Nepotism only becomes unethical when it starts negating real talent at the cost of good relations.

Also read: FlippED: Is The Backlash Being Faced By The Nepotism Kids Justified?

Star kids don’t have to worry about their big break in Bollywood and yes, they are the ones who get opportunities faster than outsiders but we cannot deny that talent wins the audience’s hearts.

However, if a star kid gets an opportunity as his cup of tea, then an outsider has to go through a lot of hardships to earn such an opportunity without any kind of certainty. 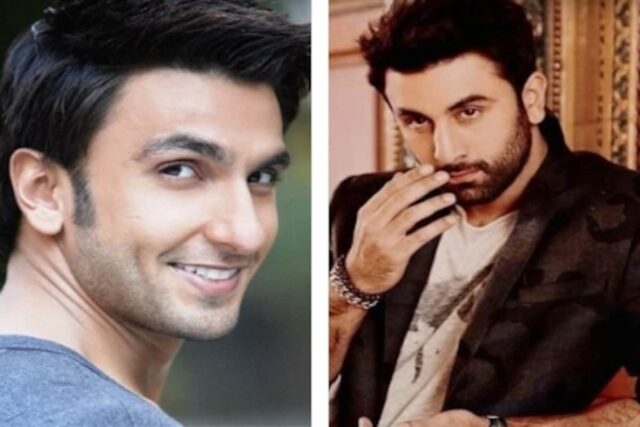 The trailer of Jahnvi Kapoor starrer The Kargil Girl has been launched recently and Twitter is already filled with boycott #TheKargilGirl tweets. Would this really kill nepotism in Bollywood? Will it help outsiders to get into the industry without any compromises or struggle? Will this stop producers from casting star kids in their movies? Certainly not.

But, it might influence many producers to prefer talent over favouritism when they have to cast a role. Nepotism can only be stopped when we start giving equal opportunity to both an outsider and a star kid to prove their worth.

An iconic movie like ‘Sonchiraiya’ had to sum up its collection with just 4 crores and a remake like ‘Judwa 2’ was declared a chartbuster with a collection of more than 100 crores, showing that the audience also contributes to nepotism.

Moreover, boycotting star kids may be helpful to some extent but it is not practical as many star kids like Hrithik Roshan, Tiger Shroff, Alia Bhatt, and Farhan Akhtar have made their place in the audience’s hearts with sheer talent. And, if we remain resolute for this campaign, we might have to let go of various talented insiders like them. 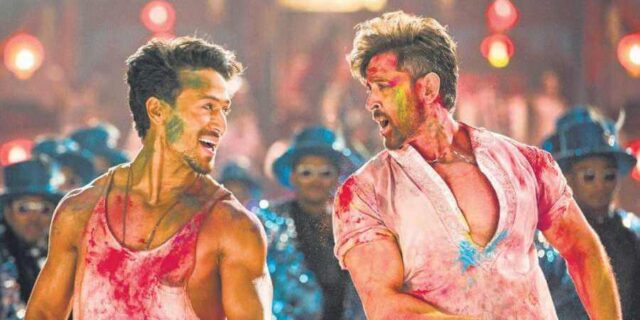 People have asked to boycott the movie and have shared various memes on nepotism making #TheKargilGirl and #GunjanSaxena trending in India. 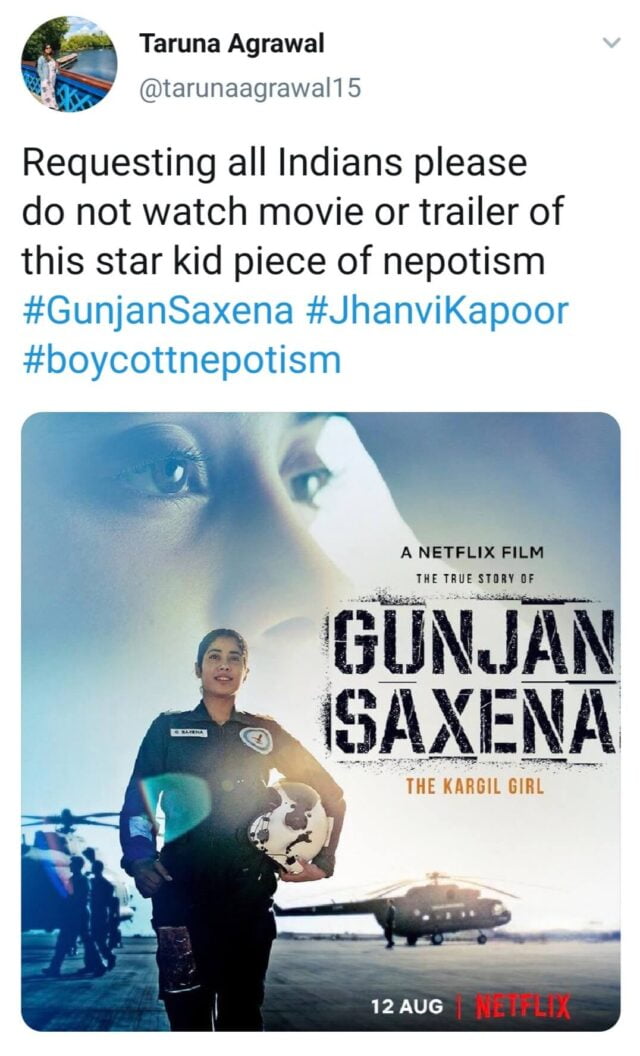 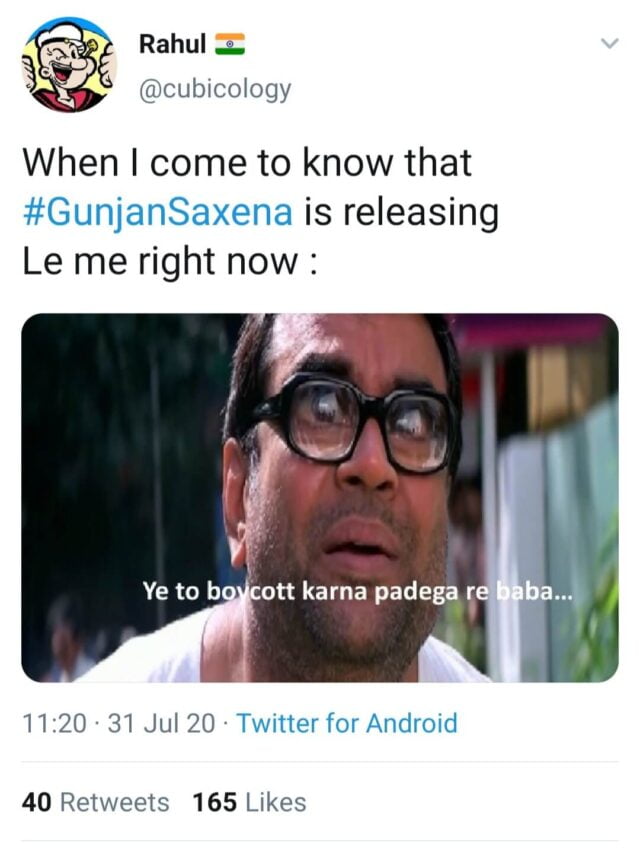 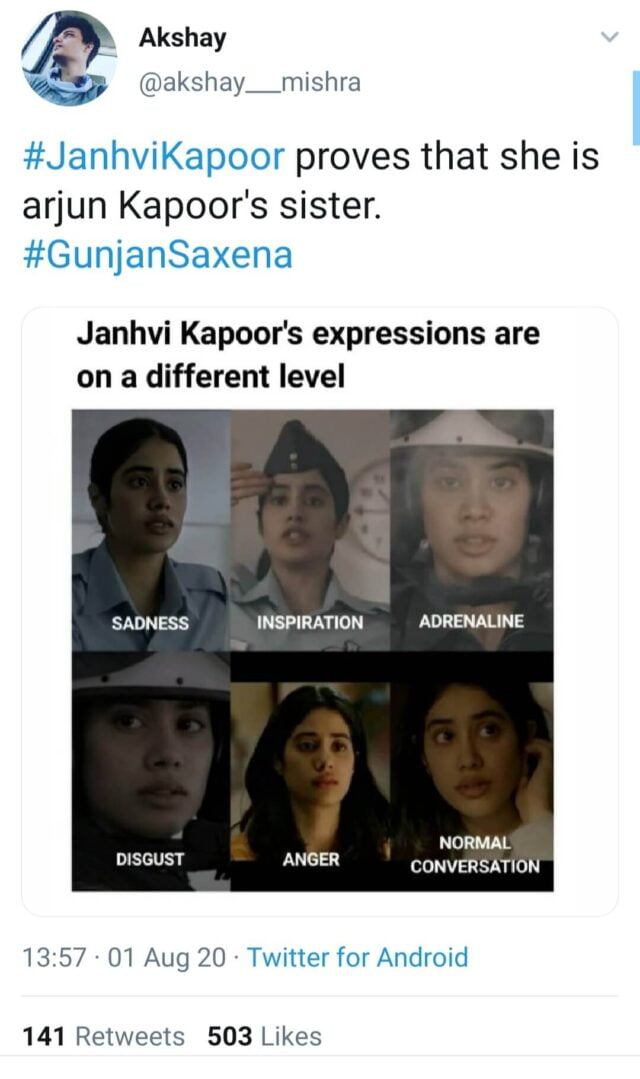 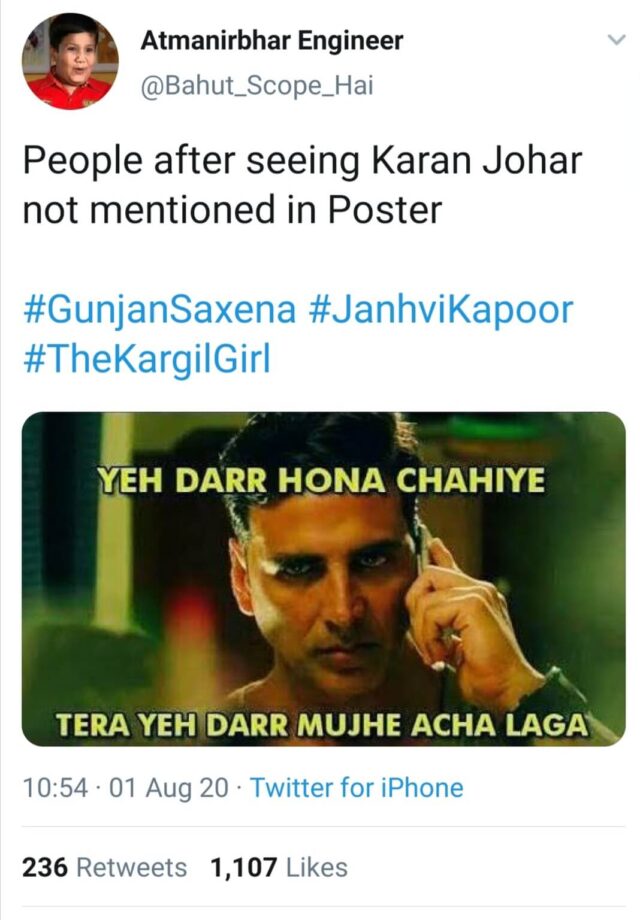 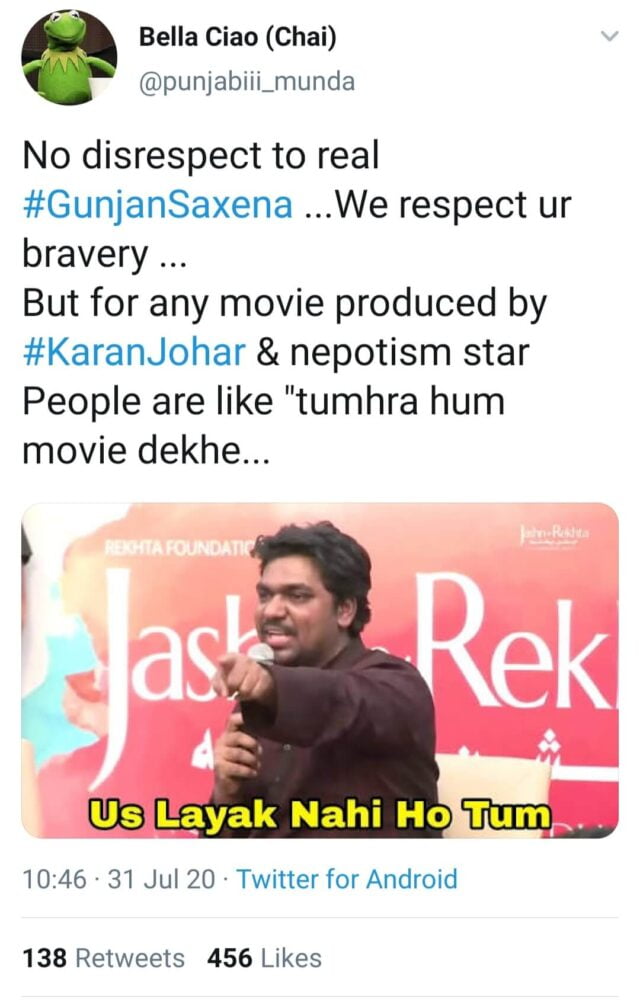 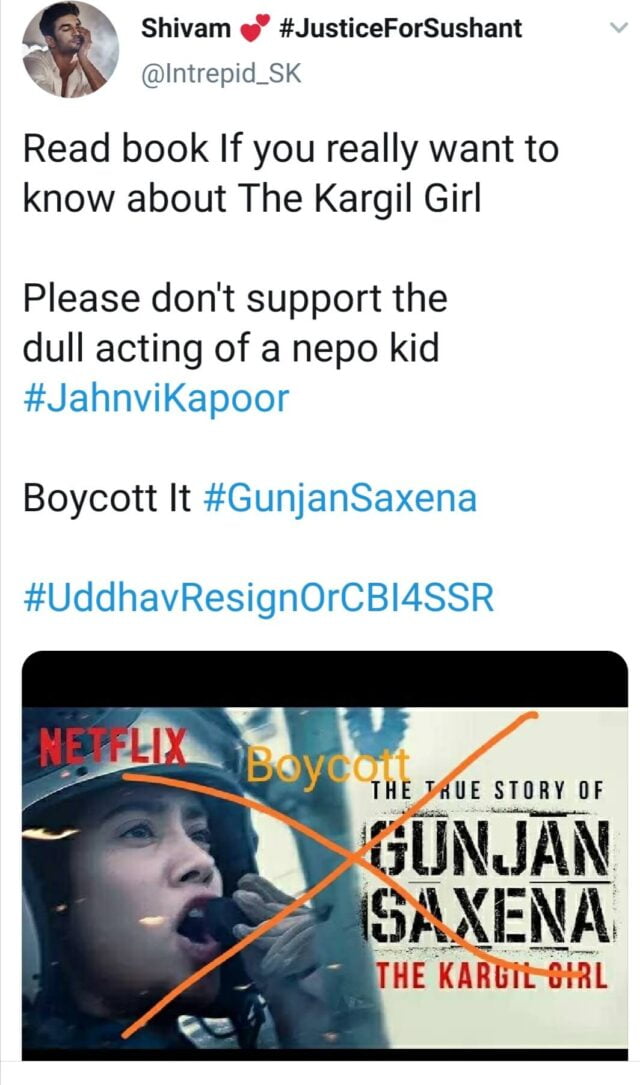 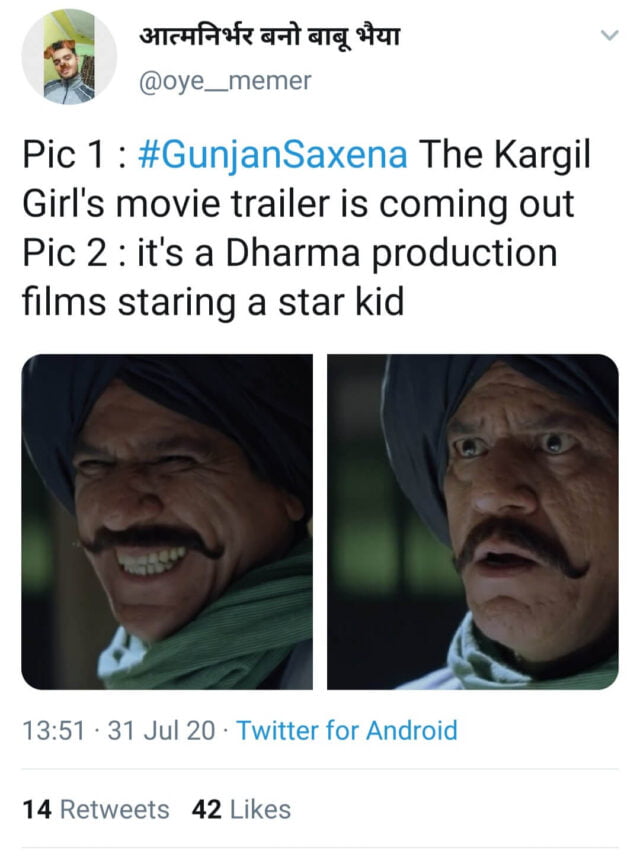 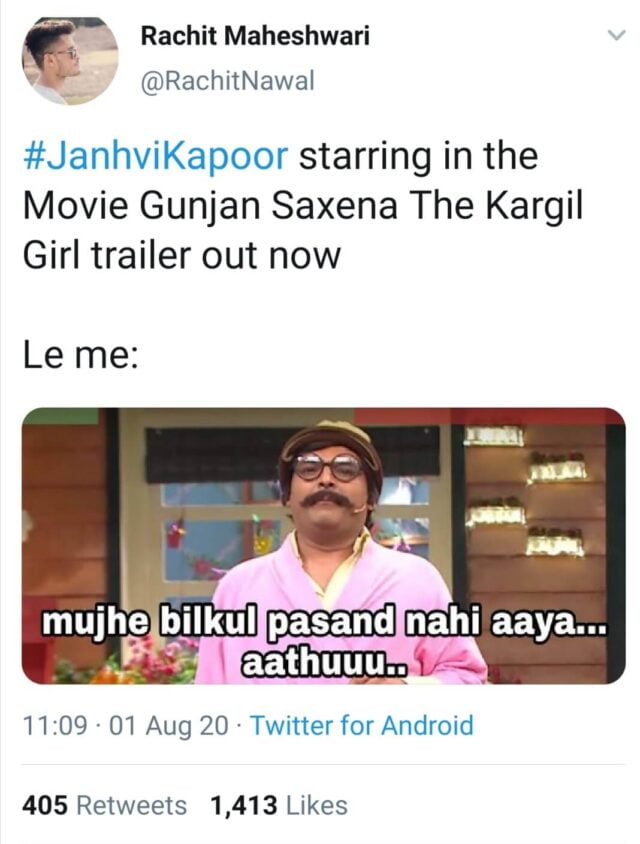 It’s a long journey before we will be able to see the end of nepotism. Boycotting star kids is a transient step but promoting talent with equal opportunities may bless us with an unbiased Bollywood industry.