With the upcoming elections, all the parties are clamouring to acquire brownie points with the public, and the Samajwadi Party is no exception.

In 2013, Akhilesh Yadav’s party launched a free laptop distribution scheme in India. This scheme sought to provide the youth with free laptops for educational purposes.

What The Scheme Is About

The scheme is mainly focused on the distribution of laptops to women, as an incentive to educate and empower them. It also provides many opportunities for the youth to pursue their interests and passion.

This scheme was largely successful as it provided 15 lakh people with laptops, which they couldn’t have afforded on their own.

The Samajwadi Party has made an impressive effort at empowering the youth and spreading technical literacy. A large portion of the youth in India have no access to the internet and as a consequence, have been deprived of the information circulating online.

Hence, this hindrance has been provided with a solution by the Samajwadi Party in the form of a laptop distribution scheme.

How Far Reaching The Scheme Has Become

On 19th of February, 2019, a student from Harvard law school tweeted a picture of himself with a laptop. 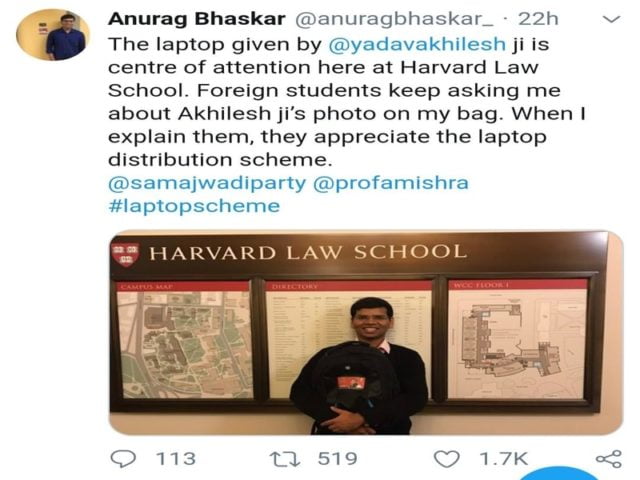 Anurag Bhaskar, a student from Harvard, alleged that the laptop was provided to him by the laptop distribution scheme, launched by the Samajwadi party in India. This proves how far-reaching and expansive the scheme is.

Bhaskar also went on to explain how his fellow students took an interest in the scheme. Bhaskar had attached a photo of Akhilesh Yadav on his bag.

On noticing the photo, foreign students inquired, and upon explanation greatly appreciated the scheme, and by extension, the Samajwadi Party.

Also Read: Four Things That Bothered Me About The Pulwama Attack

However, Anurag Bhaskar’s tweet has been met with mixed responses. Some went on to praise the Samajwadi Party for their well thought out scheme, but others have dismissed it as a publicity stunt. 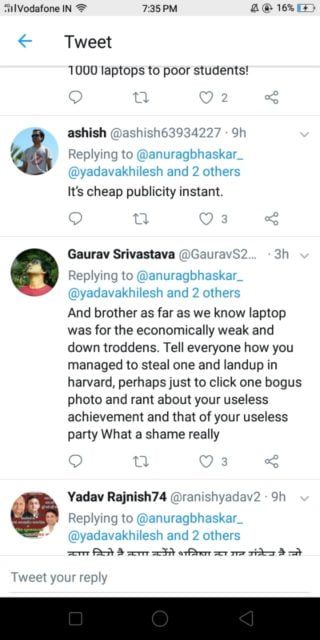 Many have alleged the tweet as a PR stunt, as the student was pursuing his studies at Harvard Law School. Hence, Bhaskar belonged to an economically well off background.

Whereas, the laptop distribution scheme mainly targeted the underprivileged section of society. Hence, many have called out the party for this alleged “fraudulent” scheme/ PR stunt.

All controversies aside, the Samajwadi Party has done a commendable job by distributing laptops to the youth. Moreover, it has provided a significant thrust in empowering the youth, and as a consequence, the future of tomorrow.