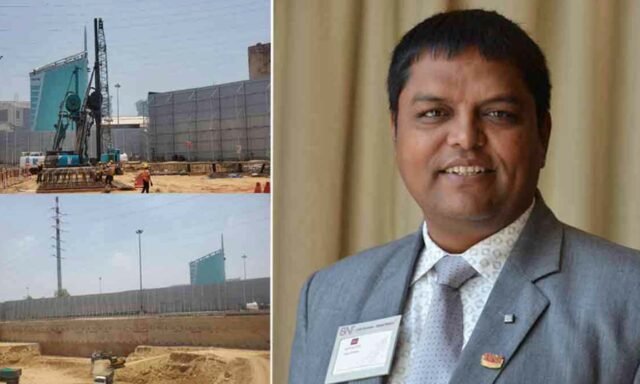 Creating and developing new spaces without disturbing or damaging the existing or old structures is a challenge. In a highly competitive real estate market Mr Gagan Goswami, the Managing Director of the Heritage Infraspace India Private Limited., has taken the challenge upon himself and carved a niche for his company specializes mainly in “Construction of deep basements with Diaphragm wall technology. “

With more than 27 years of experience in major projects of infrastructure development Mr Goswami has special expertise in the field of ‘Deep Foundation Work ‘like in Delhi Metro railway,Diaphragm Wall, Piling, cut and Cover tunnel with sheet piles and soldier piles, top and bottom-up construction, Vibrofloation, Micro piling, Cable anchoring, Grouting,Soil and Rock anchors, etc. They are also associated with the Sea Front project in the Union Territory of Daman.

Heritage Infraspace India Private Limited is one of the fastest-growing companies in the field of foundation works like Diaphragm wall works, Top-Down Construction, Shoring and Piling works, Sheet Piling, Micro Piling, Solar Projects, Civil Construction in India and worldwide. The company specializes in constructing Diaphragm walls without damaging the existing surrounding structures. Such walls can create earthquake resistant structures with more spacious underground parking areas. European countries have been using this technique for a long time but now it is being widely used in India as well.They have completed more than 45 km of Diaphragm Wall and more than 50,000 Anchors till date.

Gagan Goswami is known to be a kind-hearted, visionary entrepreneur. He says, “We too have suffered financial setbacks like the rest but still we did not lay off our employees and paid full salaries in lockdown and even from April 2021 we increased our staff salaries by 15 to 20% . We enquired about their wellbeing by periodic video calls and advised to take precautions and not to panic. We are slowly resuming work now following all the guidelines and utmost care. I believe that it is the relationships that live long, and such challenges are short lived. we should not let our people suffer during testing times.”

Mr Goswami is involved in a number of charitable works. He believes caring for nature is inevitable and we should understand that better now. He advises everyone to do the same so that we can preserve Nature and all capable person should give back to Society and build a better world. He along with Saarthi Foundation recently donated an Ambulance and conducted a “Sweater Distribution” drive in Madhya Pradesh and planning to construct a well equipped Hospital in Mandsaur (His Native District), MP.

The Real Estate sector is growing at a fast pace. While there are several players in the development segment, there is one company that has focused on key aspects of construction and has grown multi-fold in the past few years. Speaking excitedly about the company’s future he says “We currently have our presence in 11 states and will expand to other parts of the country. Currently. We are working on several major projects i.e Delhi Metro,DLF Downtown Project, RVNL Subway projects and Five basement project at Gurgaon for Aadarshini Group. The company has set a target of taking its turnover to Rs 1,000 crore in the next five years,” he concludes.