Home Lifestyle First Sidhu And Now Kapil, Who Will Indian Twitterati Boycott Next? 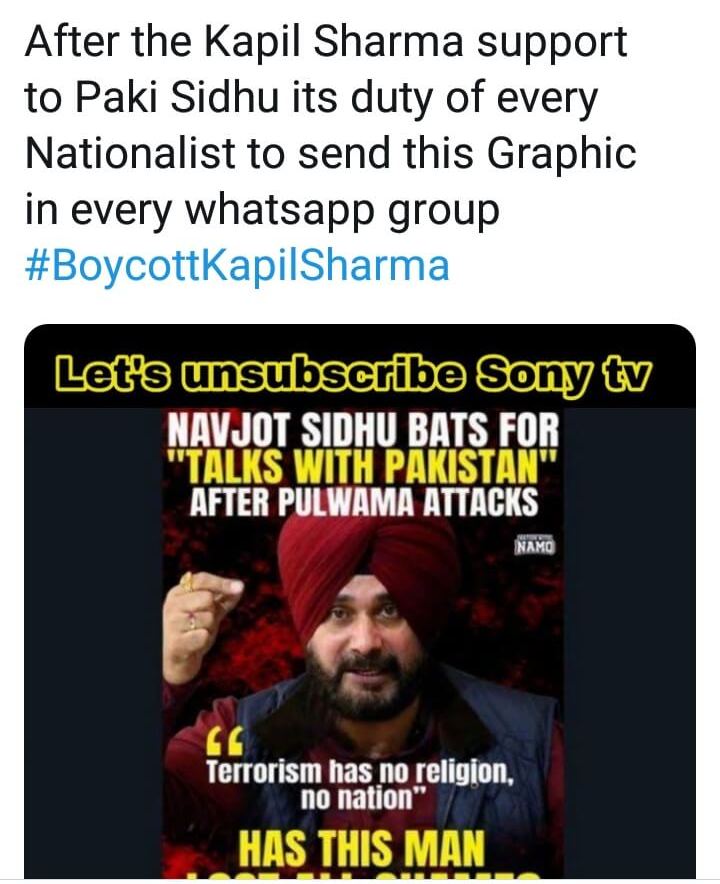 Recently after the Pulwama Terror Attack case, many politician and celebrities voiced their opinions and justified their anger towards the sheer act of killing and spreading terror in Jammu.

One such politician and famous public personality was Navjot Singh Sidhu. During an interview he reached out to the nation in request for them to not blame the whole country for the attacks but few terrorists who actually carried forward this heinous act.

According to him, the terrorists who planned the attack should be condemned and punished but furthermore he stated;

The above statement was the root of the incidents and boycotts that followed.

Many people took to Twitter to express their anger towards Navjot Singh Sindhu and asked the producers and sponsors of the comedy show on Sony, The Kapil Sharma Show, to remove Sidhu from the show.

New hashtags were circulated on Twitter to boycott him. People in great numbers opposed his views and lashed out at his opinion, calling him Anti-National.

In response of the mass hate comments and requests, Navjot Singh Sidhu was apparently replaced by Anjana Puran Singh who has appeared as a judge on many comedy shows before.

It is also an alleged possibility that the changes will be permanent given Sidhu’s other commitments with politics and campaigning.

The host of the The Great Kapil show, Kapil Sharma who appeared in a public conference for an event in Chandigarh was seen to be backing up Sidhu.

He gave a statement regarding the hate comments and boycotting of a member from his show.

Read More: FB Posts Asking India To Go To War – What Do I Think Of It As A Millennial

As aftermath of his statement a new hashtag was originated to propagate the agenda of boycotting Kapil. People along with Sidhu labelled him as a Pak-Supporter.

All over the Twitter people were seen using this hashtag and boycotting him and his show. Urges were made were users asked Salman Khan, the producer of the show, to stop the show. Many people also urged the sponsors to withdraw their funds from the comedy show.

The hashtag #BoycottKapilSharma has reached 59,000 tweets, and still going higher.

The attack that happened was an unforgivable mistake. The death of those 40 CRPF soldiers was not valid and should not be forgotten. Their sacrifice is something that we as a country are forever indebted to. But people are given freedom to express their opinions.

We can not be the judge of other person’s actions or view as they are entitled to having their own but what we can do is, stop creating riots and disputes within our own country.

And instead focus over how to never let such tragedy repeat itself and while our soldiers are alive we should work towards providing them better facilities and amenities.

Sandesh Singh Captures the Evolution of Mumbai in the Pages of ‘Life on the...

Reviews Brand Voice - December 7, 2021
Sandesh Singh believes that every human is a hero in their own life. They have their story and their struggles which they conquer or...