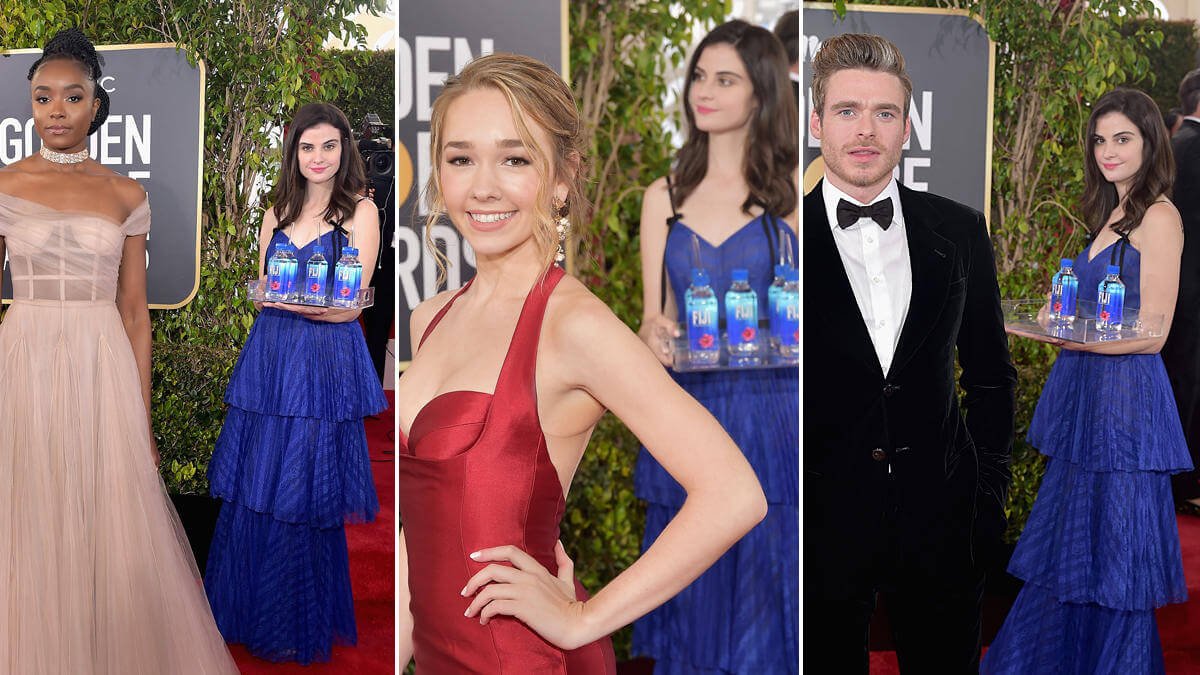 It has become a humorous phenomenon where people deliberately try to photobomb someone else’s pictures especially big celebrities which then is talked about on social media and made into memes.

But it was perhaps the viral phenomenon of the Fiji water girl from the recently held Golden Globes that really took social media by storm.

Who Is The Fiji Water Girl?

As soon as the 2019 Golden Globe red carpet pictures came out, people on social media noticed a figure that was constant in a majority of the images.

A young woman in a blue dress, holding a tray of Fiji water, was caught in the background of several of the photos with some of the biggest stars of Hollywood.

She was soon enough titled the ‘Fiji water girl’ and memes and jokes about her photobombing all these big stars soon flooded the social media.

It was eventually found out that the girl is called Kelleth Cuthbert, a model and small-time actress, who as per some sources was the ambassador for the Fiji water brand at the event.

Although there are still speculations that Cuthbert did this as a publicity stunt for Fiji, in an interview with Slate, she said it that the photobombing wasn’t intentional.

When asked if she was trying to become a meme or photobomb, she said, “No! There’s photographers everywhere on the red carpet, and no matter where you stand, you get caught in the crossfire. You have to serve good face no matter where you’re standing, because you’re inevitably in someone’s shot.”

However, she did mention that “looking at the camera at the right time” really helped in making it even more of a frenzy.

Many people observed how Cuthbert, in some images, was directly staring into the camera lens from the background, which some felt was just a publicity stunt by Fiji to market their brand.

While Fiji is known to place their ambassadors at such big A-list events in strategic places where the camera clicks them along with the celebrity, it cannot really be determined if that was really the case with Cuthbert too.

Becoming the first and biggest meme of 2019, the Fiji water girl was caught in photos of stars like Jim Carrey, Richard Madden, Dakota Fanning, Idris Elba and more.

But essentially, it was just great to see well-known people from the industry, taking it in a positive way instead of getting slighted.

My biggest claim to fame is getting a bottle of Fiji from the Fiji Water Girl before she went viral.

Fiji water girl stealing the show is my favorite #GoldenGlobes story of the decade. https://t.co/u5pqhA8zJk

please take a second to recognize the true hero of the #goldenglobes red carpet: the fiji water girl. pic.twitter.com/dzsrLntCjl

Got my Halloween outfit sorted. I’m going as Fiji water girl from the #GoldenGlobes pic.twitter.com/geZ7w7Uqit

Read More: 73 YO, Fighter Pilot’s Daughter Looks For A Job For Her #FitOldGuy Dad On Twitter & It Proved Worthwhile

There was one actress who did not like this at all, Jamie Lee Curtis, who even uploaded on her Instagram account calling out Fiji and other brands at the Golden Globes for doing such promotional stunts without the permission of the celebrities.

So, my husband, who doesn’t look at a lot of show business news sites, just mentioned that I was on the CNN website. I specifically moved away from the blatant promotions by Fiji and Moet where young women with their trays filled with their wares stood near a designated camera. I knew why there was a photographer poised there and I moved away as I said out loud that I didn’t want to be doing advertising for either. Clearly this angle shows that I moved from her being behind me and yet from the side it still happens. The sponsors of events need to get permission from people when they get them to take their picture next to products.

Apparently, Jamie moved away from the girl carrying the bottles, but another angle clearly got a shot of the two in the same frame, which irked the actress.

What do you all think? Was this just a publicity stunt by Fiji? Or actually a hilarious start to the year?

Automobiles Chirali Sharma - January 11, 2022
The era of flying cars is approaching soon and perhaps in another decade or so would be fully out for public purchase. No longer...