Recently I stumbled upon a tweet from a lady, daughter of an Indian Air Force veteran, who described her father as a 73-year-old man with golf, Sudoku, and public speaking being major interests, seeking a job. 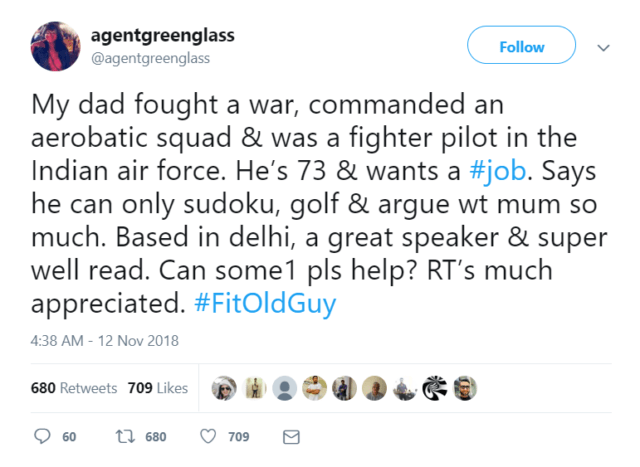 “Get him a Netflix subscription”, someone replied, to which he was humorously told that he was about two years too late!

People Were Kind Enough To Offer Help And Suggestions

A few replied on an emotional note that it pained them to see how ex-servicemen and veterans were left unemployed after serving the country so well.

Truly, if left uneventful, old age is rather depressing for most and may lead to negative thoughts too.

Especially, the gentleman being spoken about on the tweet is said to be physically very fit and active. In that case, it becomes a priority to keep the spirits high and never let him get old mentally.

Even Some Ex-Servicemen Offered Suggestions

On A Personal Note

Being a defense aspirant, when I think of it, I would never want to end up being unemployed after retiring from the forces and serving the country relentlessly.

But the truth is, the Indian Armed Forces are largest employers of the country and even take in war veterans, retired servicemen and handicapped-in-action servicemen.

A google search on ex-defense jobs would give a million results and Naukri.com is always helpful anyway!

It is said that all men in forces are brothers and they live like a family. Just a call to a known batch-mate or a commanding officer of any unit in the forces would get the gentleman a job. Nevertheless, Twitter has been very helpful and we hope the #FitOldGuy soon gets a suitable job.

We thank all men and women, in action and retired, of the forces for their selfless service to the nation.

A Biopic On Bhaichung Bhutia: An Inspiring Story That India Needs

Reviews Brand Voice - May 23, 2022
On 16th May 2022, Sukrat Bai, her husband Narmad Singh, and their 12-year-old granddaughter Kumari Mahima were brutally killed in Madhya Pradesh, under the...