Indifferent from the rest of the world is the Gulf country of the United Arab Emirates (UAE) which has witnessed over 20,000 cases of coronavirus till now.

However recently, Dubai, a metropolis in UAE, became subjected to news headlines all over the world owing to one of its endeavours to eradicate the economic distress resulting from the vicious coronavirus.

At the beginning of May, the MBRGI foundation launched the World’s Tallest Donation Box as a part of its 10 million meals campaign.

Under this initiative, the world’s tallest building and a living wonder of the Gulf, Burj Khalifa was used in an unconventional way for collecting monetary donations to arrange meals for low-income families.

The Mohammed bin Rashid Al Maktoum Global Initiatives in collaboration with Burj Khalifa launch the #Worldstallestdonationbox to illuminate Burj Khalifa’s 1.2 million lights, for every light purchased, a meal will be provided to those in need. https://t.co/u2Uiojs4NP #1Light1Meal pic.twitter.com/eiQecWbLMx

Burj Khalifa’s external facade has astonishing 1.2 million lights on it, all of which was put for sale, where the cost of light was set at AED 10 or 205.67 INR.

Donations were being accepted on the official website of the MBRGI foundation. The provision of the initiative was such that one light would cater one meal to a needy citizen.

So, the initiative aimed high at providing 1.2 million meals to those who have been the worst hit by the coronavirus pandemic, with the help of the gigantic 838 meters high tower of Burj Khalifa.

Also Read: The Paradise Destination For Those On A Budget: Dubai

Purpose of The ­Drive

“The campaign unites all echelons of the UAE society, from corporations, government and private institutions to philanthropists and the general public, to make financial and in-kind donations to provide meals and food parcels for communities most affected by the novel coronavirus, which has led to widespread unemployment and income reductions.”

This was quoted on the official website of the MBRGI in regards to its one of a kind, a dazzling initiative. 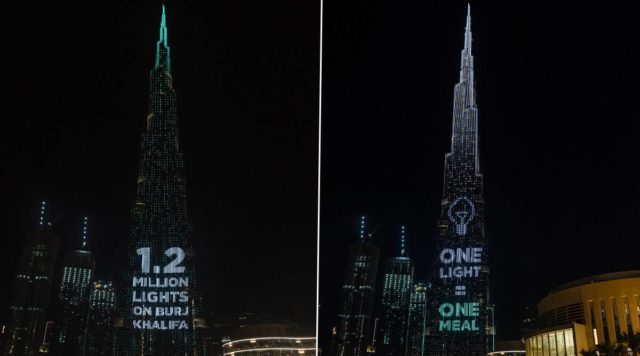 Success of The Drive

People from over 115 nations extended a hand for help for those in dire need and made the donation drive meet its target in an insignificant time span of 9 days.

Together, we lit up 1.2 million lights, sharing our message of hope to the world and achieving the impossible. #BurjKhalifa #1Light1Meal #WorldsTallestDonationBox@MBRInitiatives pic.twitter.com/TSOqsd5ctd

Finally, the great Burj Khalifa stood covered in the illumination of hope from bottom to the pinnacle, lighting the lives of the vulnerable section of the society.

‘World’s Tallest Donation Box’ was an artistic and visionary objective of the UAE. It was a wonder exemplar by the Gulf state which is ought to inspire other nations to think and use its resources in an out of the box way in coping with this worldwide pandemic.

Vande Bharat Mission: One Of The World’s Largest Evacuation Exercise To Be Carried Out By India Starts