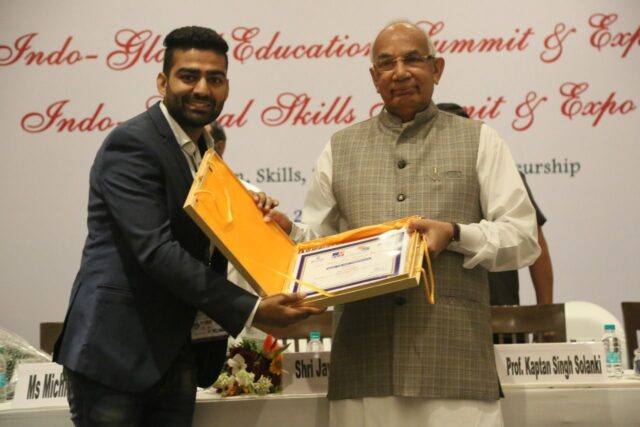 Young Indians these days are creating new milestones every day in the world of business and commerce. They come armed with the correct ideas and know how to realize their dreams. One such daring young entrepreneur is Jammu & Kashmir’s Vishal Gupta. He is the dynamic Founder-Chairman of the Shiiiva Group of Companies and promotes healthcare, wellness, education and art activities throughout the union territory. He has been active in the field of youth empowerment for the past 10 years and is also a well-known philanthropist, especially in the border areas of Jammu as well as Kashmir regions.

Born on June 4, 1991, in a small village Sohal in the border area of Akhnoor, 36 km from Jammu city, Vishal learnt the basics of business from his father, who remains his inspiration. After doing his initial schooling from the village, Vishal completed his secondary education from Government Higher Secondary School, Akhnoor before studying for his B.Tech. Honours degree in Civil Engineering and his M.Tech. in Traffic Transportation & Highway Engineering from the Lovely Professional University, Punjab. However, this multi-faceted young man wanted to do a lot more than just educate himself at some of the best institutions in the country. He is also a Ph.D. Research Scholar in Civil Engineering from Mangalyatan University, Aligarh, U.P. In an ode to his passion for singing, Vishal also completed his Sangeet Bhushan Course in Music in 2015 from Pracheen Kala Kendra, Chandigarh. Armed with such wonderful educational background, it is no wonder that Vishal is doing such great job in the field of education too.

A Mind for Business

Since Vishal watched his father doing great in business, he wanted to make his dad proud in the same field. That inspired him to establish the Shiiiva Group of companies in 2015. The group is active in fields like education, healthcare, wellness & art. As an edupreneur and healthcare promoter, Vishal has been instrumental in the following ventures – 1) Established The Royal Indian School at Jourian, one of the border villages in Jammu region, 2) Shiiiva Dance & Fitness Studio in Akhnoor, 3) Shiiiva Healthcare in association with SRL Diagnostics Brand in Akhnoor, 4) Playway school in Association with Kidzee brand in Jourian and, 5) Playway school in Association with Kidzee brand in Akhnoor  6) Shiiiva Gurukul Private Limited.

Another reason behind Vishal going for self-employment was to generate employment for others. Jammu & Kashmir has serious dearth of employment opportunities due to constant turmoil in the past decades, as well as lack of a robust industrial sector. Vishal wants to generate jobs for other young men and women like him. For his business achievements, he has received several awards so far, which include: – “Best Young Entrepreneur & Leadership Award “by Governor of Haryana Shri Kaptan Singh Solanki at the Global Education Summit & Expo 2017, “Entrepreneur of the Year 2019” by Mr Andrei Rzheussky, Ambassador of Republic of Belarus, and “Effective Edupreneur of the Year 2019” at the India Education Conclave, organized by the AKS Education Awards. He is also a proud State ( J&K unit) President  and National Executive member of the Hindu Rashtra Shakti Association!

Philanthropy and youth empowerment are two of the most significant aspects of Vishal’s work life, which he never forgets to pursue. He is a diligent promoter of welfare of manual scavengers, underprivileged children and backward sections in the Union Territory. His Shiiiva Group is instrumental in generating employment for the weaker sections and offering them a cover of financial security. He has produced a song, “Safai karamchari” too, to pay tribute to manual scavengers in keeping the society clean, especially during the current pandemic. The first of its kind song generated a lot of interest on YouTube. In fact, Vishal has been an avid campaigner for use of dustbins across the public places, especially in Akhnoor, for the past 3 years.

Despite still being young himself, the level of maturity that Vishal displays in his business and public life is an inspiring thought for others to follow the same and make the world a better place to live in.