India is a land of festivals and bizarre rituals have been going on here since ancient times.

While we Indians take pride in our diversity and culture, sometimes our faith overpowers our rationality and we inadvertently follow extreme customs and practices in the name of religion.

These practices involve bizarre customs and even innocent animals are forced to be a part of them.

Adding to the same, we came across a religious practice in Southern India that requires cows to do a holy walk of fire. 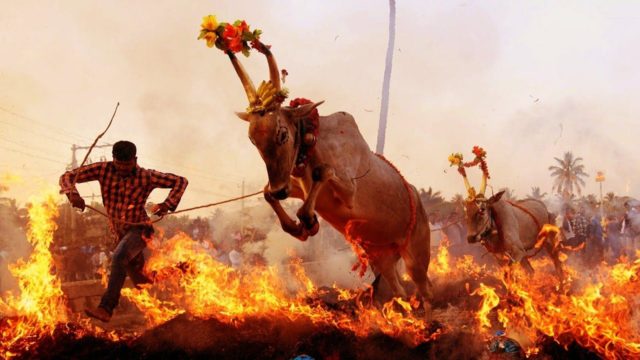 You Heard It Right

Sompura, a small village in Bengaluru, Karnataka has its own way to celebrate the Makar Sankranti.

Every year, a herd of cows is forced to run through a live-fire as part of the festival. Not only this, these cows are decorated with garlands and bells and then religiously purified before attempting the walk of fire.

The natives take pride in this practice and call this tradition of torturing animals as ‘Kicchu Hayisuvudu’.

A lot of preparations are made to carry out this ritual and a large number of spectators gather around the area to witness the deadly custom.

However, I wonder what Makar Sankranti, a Hindu festival dedicated to the God of Sun, has to do with cows. In no way does this practice of animal suffering seem logical, but it is still carried on only to please the Gods and for the prosperity of the village.

Why Do People Think It’s Okay To Torture Animals?

When the villagers were asked about the reason by a local news channel behind such a tradition and if they think it is okay to let innocent animals suffer in the name of religion, their response left us baffled.

People believe that making these cows run through a pile of burning hay will please the Sun God and bring good fortune both to the village and the livestock.

Some people also mentioned that the cows are passed through fire as a part of a ritual to keep them away from any impending harm, and it is for their own good.

Read Also: Nuisance That Indians Create In The Name of Hinduism (Don’t File An F.I.R. After Reading)

Another bizarre belief associated with justifying this ritual says that the heat from the fire burns any germs or parasite on their body and makes them healthy.

As a millennial who sets more store by logic than superstition, this doesn’t make any sense to me at all but considering their strong belief and indifference to the discomfort of the animals, the question of letting poor animals suffer in the name of faith is worth asking.

It’s 2020 and we have been targeting the minorities over their beef consumption, crying the call of animal rights.

A lot of so-called ‘Sanghis’ and ‘Gau Rakshas’ have been on an expedition to hunt down all beef eaters as it hurts their religious sentiments.

It is ironic to see that the people who pretend to consider cow as ‘holy’ or ‘sacred’ and address them as ‘Gau Mata’ are the same who allow the torturing of these poor creatures in the name of religion. 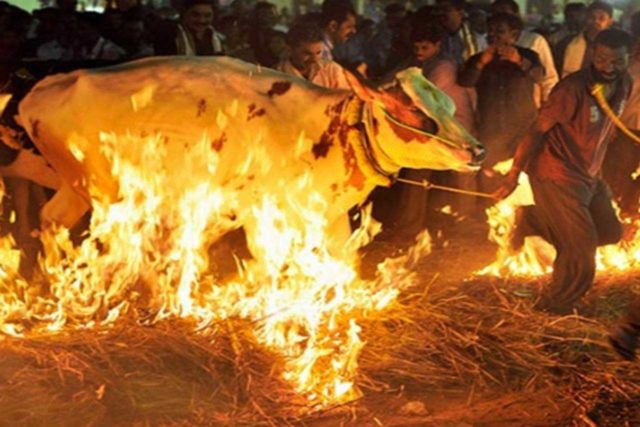 These ‘religious men’ are so concerned about protecting the cows that they can even go in for extreme actions like mob lynching, beef ban, etc, but not give up their history of causing unnecessary pain to these animals.

There’s More To It

Surprisingly ‘Kicchu Hayisuvudu’ is not the only animal torturing practice followed in Southern India.

Another tradition called ‘Jalikattu’ is popular in Tamil Nadu that involves bullfighting. Here, the bulls are released into a crowd of people, and multiple human participants attempt to grab the large hump on the bull’s back with both arms and hang on to it while the bull attempts to escape. This practice of torturing bulls is prevalent for a long time and people celebrate them in the name of God-pleasing.

Believers justify these evil sports by citing faith and relating it to the well-being of animals. However, these arguments are baseless, if they really cared about the pain of these animals, they would have preferred to vaccinate them rather than passing them through fire.

It is heartbreaking to see such practices still prevalent in society, and it makes me angry when people try to justify these stupid rituals.

Liberals have been paying a lot of heed towards these evil traditions still followed in some parts of India and have raised a lot of petitions concerning animal rights, requesting to impose a permanent ban on these practices.

Let’s hope that people do understand the rationality behind the significance of these petitions and accept it by bringing a change.