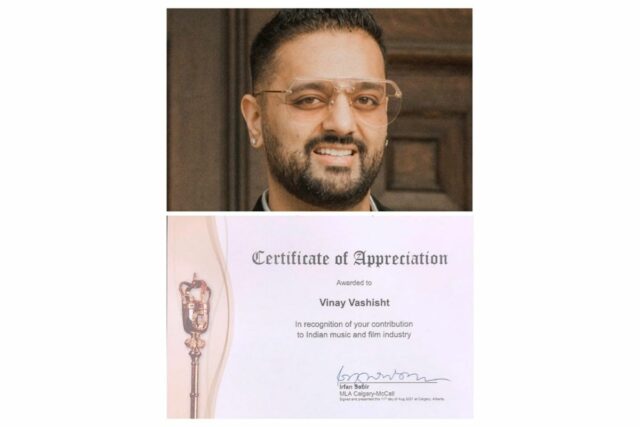 Mumbai, August 24: Producer Vinay Vashisht honoured with the certificates of appreciation and recognition for his contribution to Indian Music and Film Industry  by Alberta and the Canadian Government.

He has produced many music albums such as Tere Binn by Jazim Sharma, Ghetto Town by Raj Ranjodh, Kamli by singer Nitin and he was also one of the producer of Guzar Jayega featuring Amitabh Bachchan and 80 eminent personalities of Bollywood and music industry.

Elated Vinay Vashisht shares, “I am honoured and humbled to have received the certificates of recognition and appreciation from the Alberta and the Canadian Government. A big thank you to the Honourable Irfan Sabir, MLA and Honourable Jag Sahota, MP. I also want to thank the people who made it possible for me to get to where I am in my life today. My parents dipped into their retirement savings, took out loans and made sure they left no stone unturned to get me to where I am today. Their sacrifices and hard work has helped me accomplish so much in my life and  simple thank you is never going to be enough.”

Born in Punjab’s Phillaur, Producer Vinay Vashisht moved to Canada at the age of 5. After completing his studies in Business, at the age of 24, he established himself as an entrepreneur and an producer. Ambitious and self-made, Vashisht began his career by working two jobs to support his elderly and retired parents, and moved on to invest in companies that are well established today.

Vinay is a partner and a shareholder in many prominent companies. He has always walked on the path reflected by the words he once wrote, “Success Never Comes Easy, Always Choose The Hard Path! As You Will Appreciate And Cherish Your Rewards More!”

Vinay, who is a prominent philanthropist, entrepreneur, and producer is also a part of the Indian Film Industry and organises Bollywood concerts across North America under his home banner Paradox Entertainment Ltd. He also owns the music video label Opulence Records Ltd. In 2019, Vashisht’s home banner organised 21 shows and events across North America and also created one music video. He released another music video in 2020.