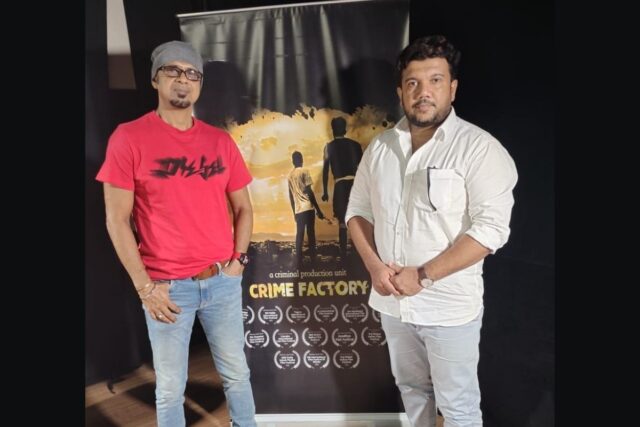 Mumbai, August 24: Crime Factory film was completed in all aspects in the 1st week of March 2020 and was in the film festival circuit; both national and international, from April 2020 to April 2021, and has won 7 awards, 2 nominations and 6 official selections.

The film is shot in actual locations in the slums to lend utmost authenticity to the backdrop of slums. The color and tint of the film is on the lines of various international films based on slums like The City Of God, Trash etc, which are warm and rustic. These colors provide the necessary rustic backdrop and also elevate the raw mood of the characters and their characterizations. It also provides an international indie look to the overall feel of the film.

All the Technicians associated with the film have put in at least a decade into their respective fields and have worked in at least 10 films each and have carved a name for themselves at regional and national levels. Action was choreographed by National Award winning Action Director King Solomon of Bahubali 2 fame. Music is by Sunil Kasyap, the music director for various big budget films in Telugu and is associated with the yet to be released Liger. The Foley sounds have been created by the famed Karan Arjun Singh of Just Foley. Sound design is done by Tarun Sharma of Audiomagick who has designed sound for over 300 films.

The Writer Director of Crime Factory, KK Binojee, has been a Screenplay and Dialogue Writer in the Telugu Film Industry for over 10 years, having worked with the likes of Ram Gopal Varma and Krishna Vamsi. KK Binojee has written the screenplay and dialogues for 20 feature films in Telugu and over 200 Episodes for Television. Crime Factory is his directorial debut.

The film is produced by Munaf Baluch and Sanjog Singh who are basically into the business of construction and civil works and it is out of their pure passion that they have for the first time ventured into filmmaking under their banner Sara Film Factory.

All the actors are from the theatre and have been performing along with the biggest names in Hindi Theatre at Prithvi Theatre Juhu and on other stages for a decade. They have also been doing various characters for Films, Television and Ad Films too. Vijay Raaz lends his voice and narrates the story from beginning to end.