Startups and small businesses are steadily rising with various government and private organisations focusing on this sector and providing funding and help in areas like resources, technology and more.

But it was a post that I came across which talked about how apparently a team of students from a renowned university: BITS Pilani were working on an app to keep a closer track on employees in a small companies, that got me thinking. 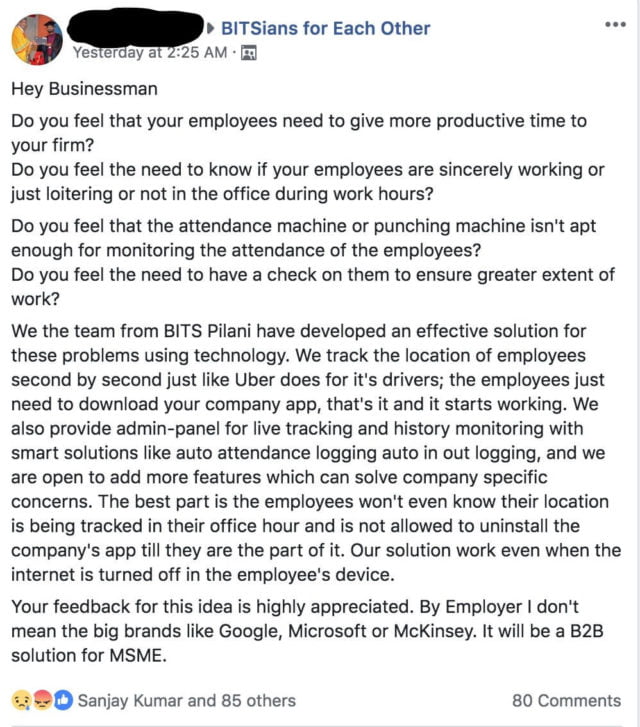 Now, this is a really disturbing thing to be developing, since it would allow an employer to track the whereabouts of their employees without even the latter having any idea about it.

Here are a few reasons why this app is so concerning:

First of all, it is extremely dehumanising to the employees who are being tracked as if like animals, any and everywhere that they go.

This kind of invasion of privacy is extremely unethical and starts to consider the employees as not humans but an object that you can control and track as per your will.

“We track the location of employees, second by second just like Uber does for it’s employees”

This line was extremely disturbing since Uber’s business system is extremely different from a normal office where an employee spends a certain number of hours in person.

It makes sense for Uber to keep track of their drivers since they are always moving about the city and the increase in number of crimes like robbery, assault, harassment and more has made it necessary to do so. Plus it is meant for matching them with location based customers.

Technology is reaching each and every part of our lives and with online tracking already in place by government and even online portals like Google and Facebook, this is just going one step further.

Why create such a harsh and robotic environment for the employees where every second they are terrified that someone is watching them at all times of the day.

This is simply turning humans into machines who mechanically do their work, without any kind of freedom.

A simple clock in and out system is understood to maintain the office decorum of punctuality, but anything more than that is just unnecessary.

#3. Human Element Is Going Away

Such close monitoring by technology makes the human element of the office space go away, something that is not always good.

This kind of tracking does away with the constant interaction between the employees and their employers and create a very clinical environment.

Such kind of apps and technology can also increase paranoia for both the sides.

One point about the app that is worrying is,

“Our solution work even when the internet is turned off in the employee’s device.”

The fact that it can work even without any internet connection is almost scary, since that way, no matter what, you are never able to be on your own.

What this will do is create paranoia in the employees and could potentially affect their productivity, which in turn will show on the app and could harm their job.

Not only employee, but even the employer will constantly be checking the app to see where the employees are and whether they are following the rules or not.

Most of all though, it’s the fact that such an app could introduce a very negative corporate culture where even the basic rights of a person are being stripped away.

“The best part is the employees won’t even know their location is being tracked in their office house and is not allowed to uninstall the company’s app till they are a part of it.”

Employees can be tracked without any consent of theirs which is a massive breach of their privacy and not something that should be approved.

Also, this kind of constant and intimate tracking is not really going to help, and could be counterproductive.

It is not like right now, those who are not being useful to the company are not found out, since it clearly shows in your work at the end of the day. Most of the time, team leaders and office managers know exactly how much work each employee is doing and if someone is wasting time and not doing anything then it shows.

If the targets or goals are not achieved then you don’t need these kinds of metrics of how many coffee or smoke breaks a person takes, to prove their inefficiency.

Discipline is important, especially in a professional environment, no doubt about that, but at the end of the day work and quality is most important.

So a person who is coming to the office on time but not being productive is not useful to the company but a person who has fluctuating timelines but is bringing profit will be.

It is also important to maintain the sanctity of office and that certain boundaries are respected on both ends.

Before India, China has already had this idea of intensive tracking, only at a much larger scale.

Apparently, as per reports, by 2020, the entire 1.35 billion people of China will be integrated into a ranking system where each citizen will be given a social credit score based on their economic, social and political behaviour.

The Chinese government has apparently said that this is to encourage trust and moral behaviour of citizens and increase administrative productivity.

Under this credit system, the citizens will be judged on the score or points they get affecting their daily lives.

The data will allegedly be collected from government departments of all kinds, that go from criminal records, social media activity, business dealings etc.

The exact basis on which these scores are given is not revealed but some behaviours can include bad driving, smoking on trains, spreading fake news, causing trouble on flights, buying excessive video games, not paying fines on time and more.

For instance, posting anti-government or hateful posts on one’s social media can result in a low social credit score.

Following traffic rules, showing good Samaritan behaviour and more can increase a citizen’s scores. A high credit score can be gotten by exhibiting good behaviour like helping someone on the road, not littering, and such.

Those who have a good credit score can get privileges like better loans, discount on energy bills, access to good hotels, schools, gym, schools and more.

However, a low social credit score can result in being publicly shamed as a bad citizen, the citizen or their kids even being expelled from schools, and disturbingly not being allowed to use trains or flights.

Update: This startup or the idea is in no way endorsed by any of the professors or alumni of BITS Pilani.

Why Do Employers Not Respond After Using Tons Of Time Of A Prospective Hire? 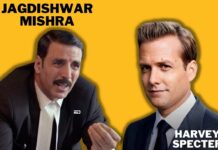