Public urination is a major problem in India.

The act of public urination is not only offensive but also gives a bad name to the country in front of foreigners. It is so widespread that it has become a normalized thing in the country as no strictness was ever shown by the authorities over the same. 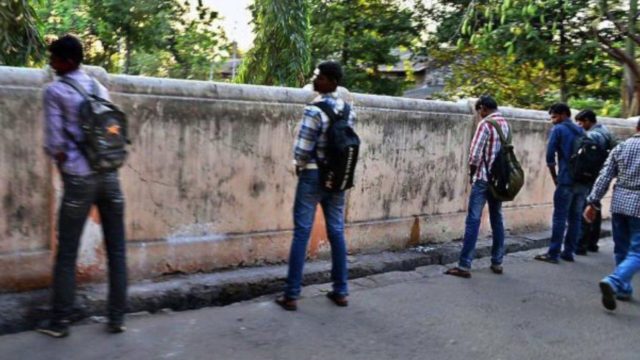 However, understanding the prevalence of the problem and its consequences, for the first time ever Bruhata Bengaluru Mahanagara Palika (BBMP) has come up with a solution to curb down the stigma of public urination.

Mirror, Mirror On The Wall, Who Is The Most Shameful Of Us All?

BBMP came up with a bizarre solution to stop people from urinating in public.

The Bengaluru authority has put up 5 large mirrors of size 8×4 feet around the most crowded places in the city. The idea was brainstormed at the Swachh Survekshan 2020 campaign after failed initiatives of painting deities on the wall or writing warning slogans.

When asked about the same, the BBMP Special Commissioner, Randeep said, “We want people to see public urination as a taboo, that is the main goal for this initiative. We are also in the process of building more toilets across the city, and necessary plans have been proposed to make urinals free for the people.”

“If criminalizing the act did not stop One from urinating in public, the embarrassment and the shame followed with the same could probably do.”

I don’t think that public urination is a thing one needs to get educated upon.

It is a very basic civic sense every citizen of India ought to have. Open defecation in urban or rural areas is one of leading causes of diseases. Thus, it’s not only about keeping the surroundings clean but also about public health and hygiene.

In a country where women are mistreated for wearing ‘certain’ kind of clothes or a couple is
reprimanded for indulging in an intimate moment in public, it’s quite ironic that people seem to
consider public urination quite normal.

Despite untiring efforts by authorities like imposing fines, on-spot arrest, creating awareness, etc., all of which seems to have gone in vain as people just know how to get away in such situations, the only way to fight such a mindset is public shaming.

Under the mirror concept, the passers by can see anybody who is urinating in public which would be embarrassing for them and force them to change their habits. 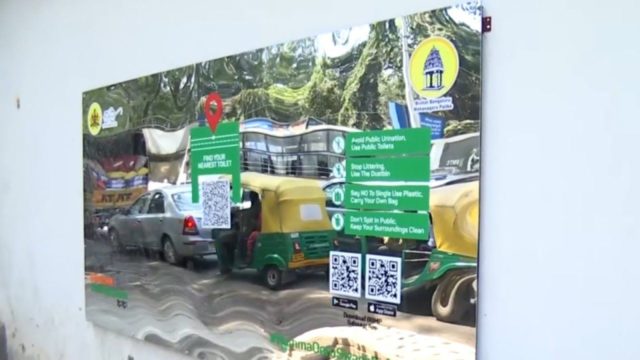 Not only this, these mirrors have a QR code intact which can help one to locate the nearest public toilet.

Surprisingly, Google maps enlists more than 60,000 public toilets in 2,300 locations across India. Most of these toilets go unused as the Indian public is more comfortable in peeing on the walls than in a proper toilet built to relief yourself.

What makes men pee comfortably on the walls is the fact that it is socially acceptable on the
upfront. Whereas, I am sure urinating in front of the mirror might make anybody uncomfortable and would compel them to look around for a private space.

Public embarrassment is indeed a big thing for us humans. If criminalizing the act did not stop one from urinating in public, the embarrassment and the shame followed with the same could probably do.

Also Read: FlippED: What Is Better: Adulthood Or Childhood? Our Bloggers Fight It Out!

“If people had to be just shame-faced in order to prevent them from peeing on the walls, the posters of gods on the walls and the embarrassing captions would have had already stopped people from doing all this.”

The logic, as said by the BBMP officials is that this will shame the people who face the wall to urinate, thus preventing them.

Now, while the intention seems pretty noble and innovative too perhaps, it is nevertheless a futile and short-sighted move. The reason is simple: If people had to be just shame-faced in order to prevent them from peeing on the walls, the posters of gods on the walls and the embarrassing captions would have already stopped people from doing all this.

All these moves that aimed to put an end to public urination via ‘shaming’ people have visibly failed. The fact of the matter is that merely shame-facing of people isn’t going to stop them from public-peeing.

This is just like brushing off the dust under the carpet, rather than dealing with the problem at the roots. What is required on the authorities’ part is to make a sincere effort at educating the people on the evils of public urination and defecation, as well as to not just erect toilets, but to explain their importance and use to people.

Besides, public urination is nothing new and has been an unsolvable menace in India for ages. Insurmountable efforts by the government- the Swachhta Abhiyaan, installing CCTV cameras, pasting posters of gods and goddesses on the walls, fining the perpetrators, writing funnily humiliating captions on the walls – none have succeeded in deterring people from staining and stinking the country’s walls.

Fines on the issue should be increased. Plus, merely levying the fines isn’t enough. An equally stringent strategy should be devised for their implementation too. The meaning and importance of civic sense needs to be reiterated as well.

As for these mirrors, let us hope that they serve the purpose they’re being put for, and not end up becoming yellowed and stinking with time.