Since Dr. Sitaramayya was strongly supported by Gandhi, so much so that he stopped him from withdrawing his candidature, it is seen as a personal failure of Gandhi.

After the announcement of Bose’s victory, Gandhi said, “…I am glad of his (Subhash’s) victory.. and since I was instrumental in introducing Dr Pattabhi not to withdraw his name after Maulana Azad Sahib did so, the defeat is more mine than his…”

“After all Subhash Babu is not the enemy of our country… he suffered for it”, he added.

Gandhi urged Bose to assume the duties of the President and form his working committee for running Congress.

However, it may seem difficult as reports suggest that Subhash Chandra’s re-election is not sitting well with some INC workers, especially those supporting Gandhi. The working committee is dominated by Gandhi supporters, who may not be happy with the presence and ways of Bose.

Since the Constitution of INC does not provide for the removal of the president, power-play may occur in the Congress Working Committee in the near future.

At present, the Indian National Congress’ future seems uncertain and blurry. Only time will tell the fate of INC.

Read Also: Back In Time: 2 Airplanes Collide In A Freak Accident Killing 583 People

Subhash Chandra Bose is one of India’s most celebrated freedom fighters and though Gandhi and Bose had immense mutual respect, their views and ideology didn’t match which led to friction at times.

In 1939, when Bose was re-elected as the President of Indian National Congress, he won against the candidate supported by Gandhi. Originally, Mahatma Gandhi wanted to project Nehru as the candidate however he refused and nominated Maulana Azad.

Later, even Azad backed out and his candidature was taken over by Dr. Pattabhi, an Andhra leader.

The victory of Bose was seen as a blow to Gandhi’s principles that dominated the minds of members of Congress and considering the same, he declared Pattabhi’s defeat as his own.

However, this shift in ideology didn’t last long in Congress and at the party’s Annual meeting in Tripuri near Jabalpur, Bose’s demands were left unheard and later, 13 members of Congress Working Committee resigned.

In April 1939, Bose stepped down and his position was filled by Dr Rajendra Prasad who went on to become the first president of independent India.

In May 1939, he formed the Forward Block within Congress and followed a path different from the Gandhian ideology. 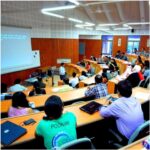 Campus Somnath - December 1, 2021
There was a time when MBA was easy to do. But in today's world, with automation on an exponential rise, human resource is the...