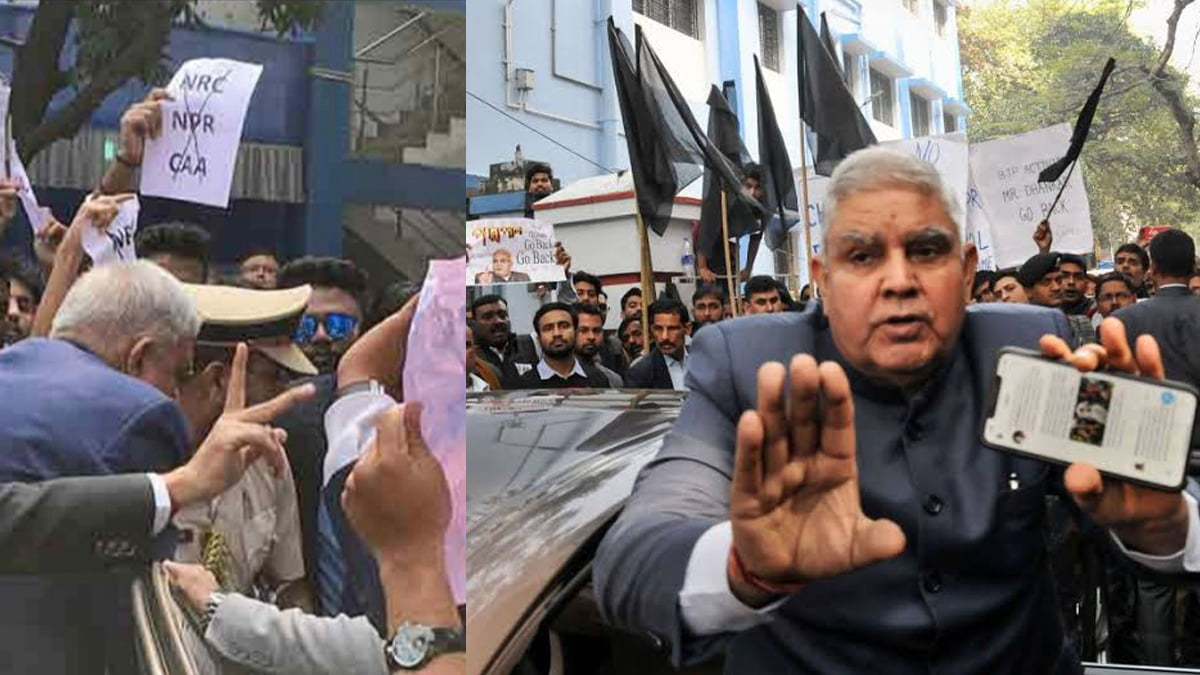 Calcutta University held its convocation ceremony on 28th January at Nazrul Mancha. Despite him being the Chancellor of the University of Calcutta, the students of the university did not allow the governor of West Bengal – Jagdeep Dhankhar, on the stage of the program and he was forced to leave the venue.

ALSO READ: Why Is The West Bengal Governor Not Very Popular Among The Students, Especially Of Jadavpur University?

Amidst ‘Go Back’ slogans and black flags as the governor approached the Nazrul Macha auditorium, he found himself surrounded by angry students protesting against his take on NRC, CAA and NPR.

Despite repeated appeals by the authorities, students held anti-CAA placards and raised slogans in front of the stage and stopped the event for almost 45 mins.

On Tuesday, Jagdeep Dhankhar was supposed to confer an honorary D.Litt on Nobel laureate Abhijit Vinayak Banerjee. But with students protesting outside, things didn’t quite go as he had planned.

After much consideration and as he had not yet signed the D.Litt certificate that was to be handed over to the Nobel laureate, the students allowed the governor to reach the green room of the auditorium.

Proceedings of the event

After signing, Dhankhar was asked to leave as the students stood their ground and did not allow him on the stage. The slogans continued until Dhankhar had left the venue and the event started only after the Vice-Chancellor of the university, Sonali Chakravarty Bondhopadhyay assured that the “Governor will not be present at the ceremony”.

“The events that took place yesterday didn’t happen spontaneously. The chancellor was forced by an unruly mob to leave the venue, despite the chancellor being duly invited,” he said at a press conference.

According to sources, it wasn’t until Monday that Dhankhar was sent an invitation to attend the convocation, although his chair makes him the Chancellor of all the state-run universities.

Along with Dhankar, Bengal’s Chief Minister, Mamata Banerjee was also said to be invited in the ceremony but was absent from the event. Reports say that she was seen at an art camp organized in protest against the citizenship law.

As the events unfolded in front of the Nobel laureate, he said that they were a little hard for him to entirely comprehend.

After the event, Dhankhar tweeted “Convocation of Calcutta University was at Nazrul Mancha auditorium and not on the campus of Calcutta University. There was total failure of the State Machinery to maintain law and order. The obstruction was stage managed. This happens to constitutional head. Where are we heading!”

After his departure, the event was presided over by the Vice-Chancellor of the university, Sonali Chakravarty Bondhopadhyay.

“VC sought permission from as Chancellor to proceed with the Convocation,” said one of Dhankhar’s tweets.

Ironically, though Dhankhar’s first tweet of the day said,

President Ram Nath Kovind had to face boycotts, refusal of gold medals and protests from the students when he attended the convocation ceremonies in universities such as BHU and PU.

Relationships Palak Dogra - January 31, 2023
When naming their kids, parents usually come up with unique names so that their kid stands out. However, sometimes these “unique” names turn out...