Home Social Opinions As A Telugu & Hindi Speaking Student, I Feel English Might Be... 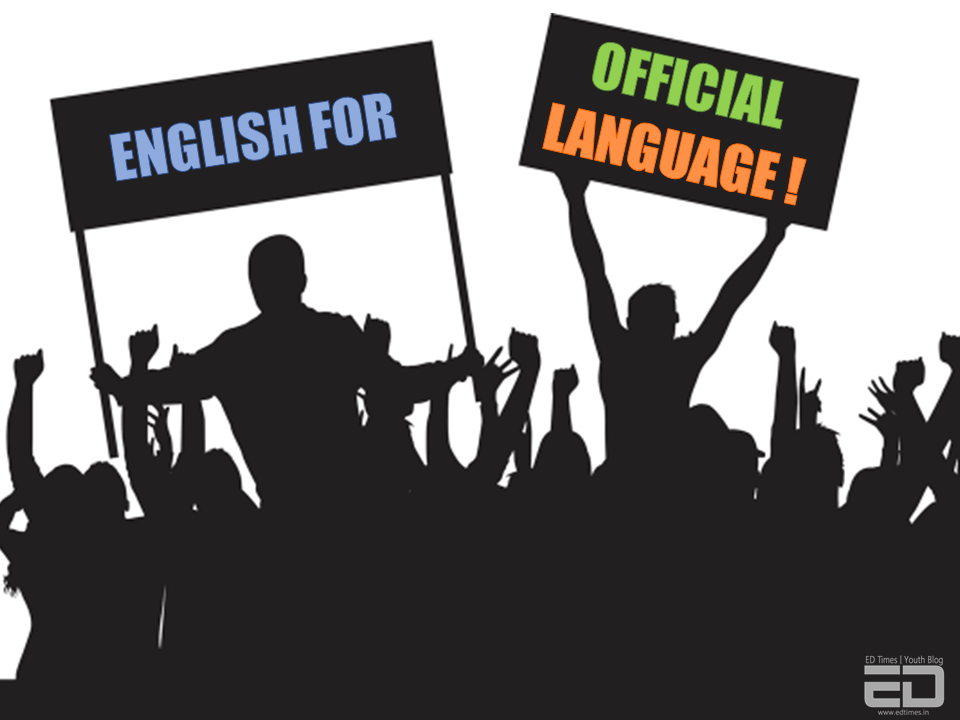 All these questions are being discussed in this country today, because of the National Education Policy 2019 draft, which made it mandatory for students to learn Hindi with English and allowed them to choose another “modern Indian language” as a third subject.

Here is the drafted paragraph about the choice of subjects in languages:

“In keeping with the principle of flexibility, students who wish to change one of the three languages they are studying may do so in Grade 6, so long as the study of three languages by students in Hindi-speaking states would continue to include Hindi and English and one of the modern Indian languages from other parts of India, while the study of languages by students in the non-Hindi speaking states would include the regional language, Hindi and English.”

To this, two prominently strong parties in Tamil Nadu – DMK and AIDMK, protested very strongly. Known faces like senior Congress leader from Kerala, Shashi Tharoor and a few others gave frowning remarks about the draft. 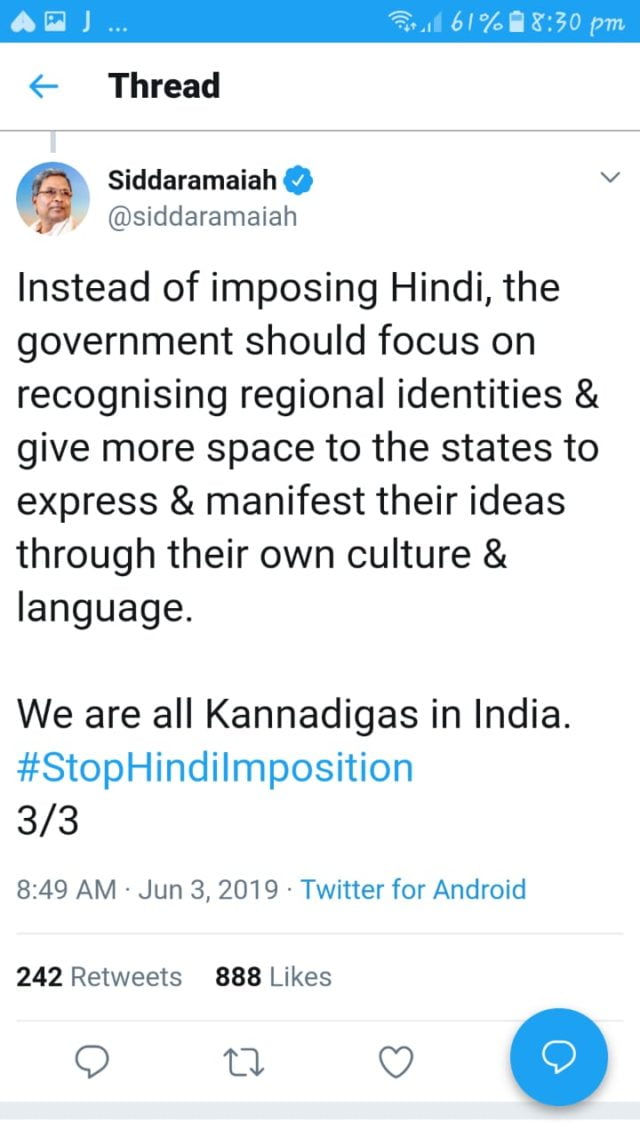 Newly-appointed Finance Minister Nirmala Sitharaman and Foreign Minster S Jaishankar came to the rescue to fight the uproar and assured everyone that the draft would definitely be revised. 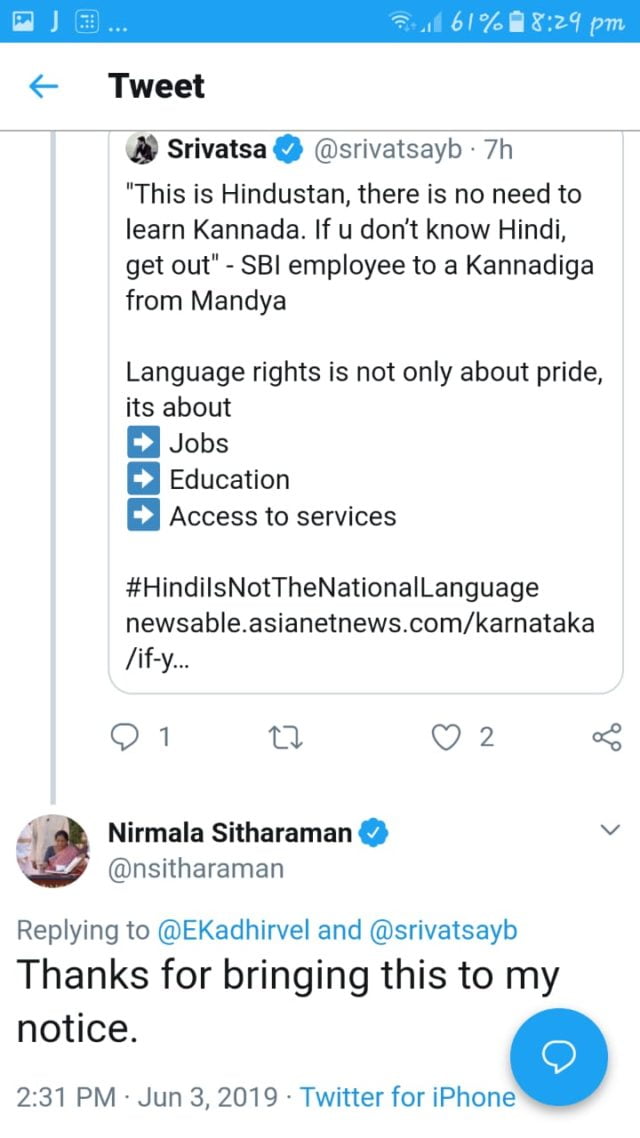 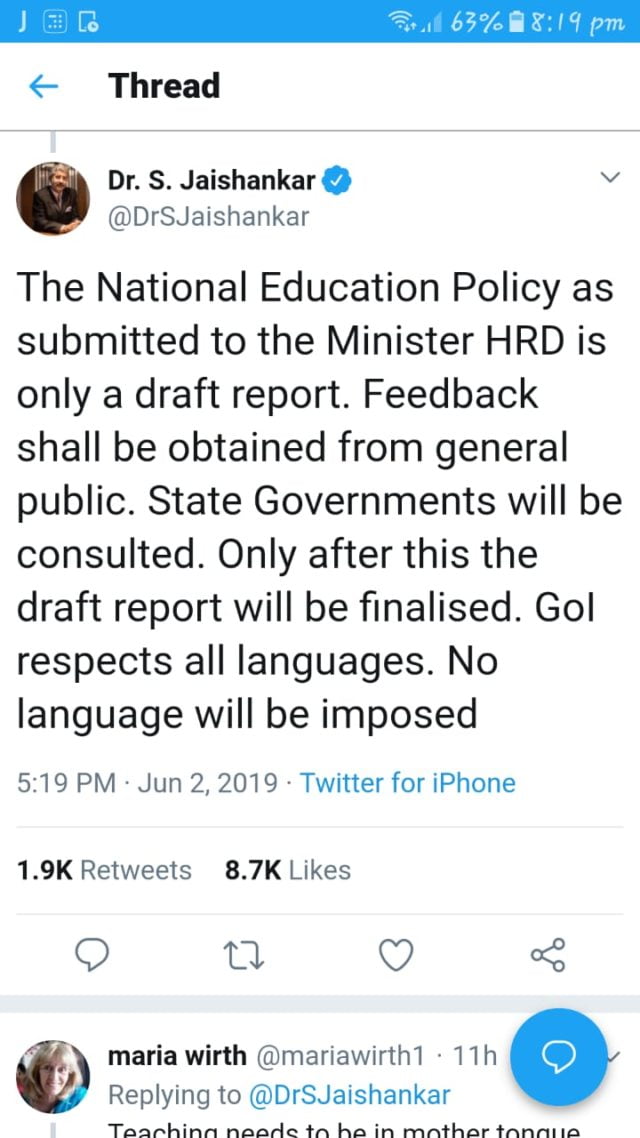 Vice President Venkaiah Naidu defended the NDA led government asking people to stop drawing hasty conclusions, and rather get better knowledge of what the draft was all about.

Here is the revised draft of the paragraph:

“In keeping with the principle of flexibility, students who wish to change one or more of the three languages they are studying may do so in Grade 6 or Grade 7, so long as they are able to still demonstrate proficiency in three languages (one language at the literature level) in their modular Board Examinations some time during secondary school.”

Also Read: Why Do Most Millennial Punjabis Not Speak Their Language But Happily Indulge In Punjabi Music?

From A Personal Perspective

I have grown up in Delhi but I am a native of Hyderabad. The only time that I’ve learnt Telugu is during summers when I visited my grandmother down South. Now, I study in a college in Hyderabad, where professors tend to change from English to Telugu for better delivery of content to students.

Not knowing Hindi, is not a problem here at all. In fact, knowing Telugu is better. This means, when the constitution states Hindi as the official language along with English, it basically puts everyone in a fixture to learn Hindi for official purposes. 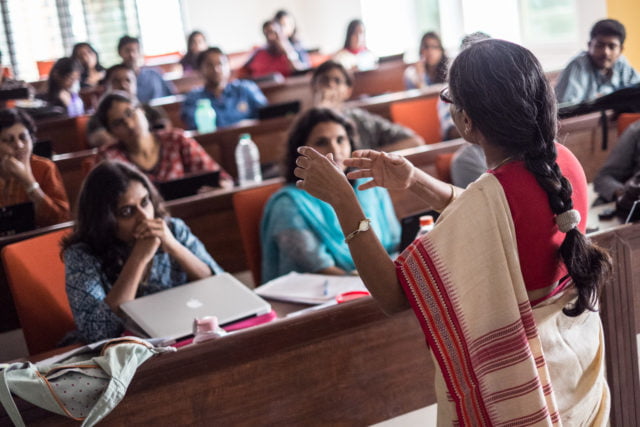 Imagine a situation where the Supreme Court sends a letter in Hindi about ruling out the death sentence of a man to the executioner in Chennai who knows only Tamil and English. Not being able to understand that letter, will cost a man his life.

Our defence organizational structure, constitutional pillars, education system, and a lot of other things are based on the British ways. Why not the language too? Anywhere in this world, English will be understood, at least to some extent.

English will definitely make a better official language. Along with that, I believe that studying a state-based language should be the focus of selecting the second subject. 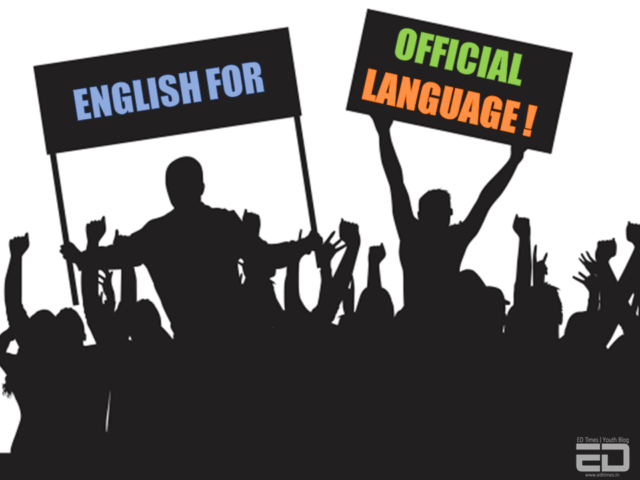 That way, the entire system will have one official language – English, and communication in that particular state will be better in the local language.

To support my arguments, I have a few demographics. According to the 2011 census, less than 25% Indians have Hindi as their mother tongue and only close to 45% Indians actually speak Hindi on a daily basis, or use it for official purposes. 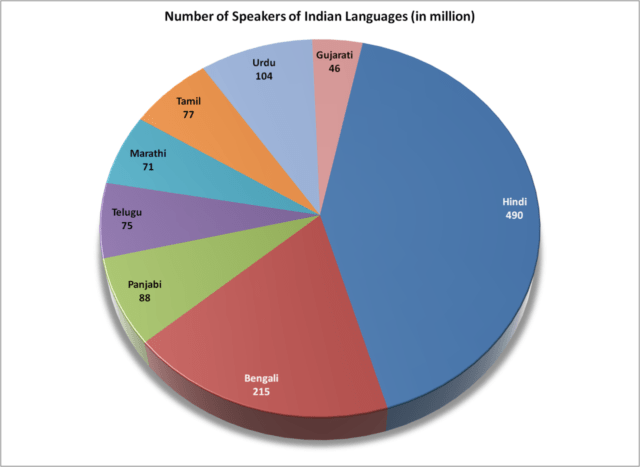 Bangla is the second most spoken language followed by Marathi, Kannada, Tamil and many more. For the 25% that have Hindi as their mother tongue, why should the rest 75% be forced to learn it, when they can be better off with a language spoken on a daily basis in their state?

This linguistic chauvinism, as quoted by CPI(M), of thrusting Hindi on states where people have nothing to do with that language in any form, will only bring more and more communication gaps in this country. This might be one major reason why India is still divided.

What is to be done with the national language is another debate. We are not a country like Britain where English is everywhere, or like Saudi where Arabic is everywhere. The states of India were formed mostly due to linguistic differences.

If we are free, let there be real freedom. India won’t be completely democratic until we have these small issues which ultimately become forest fires.

Although I have nothing against Hindi, but honestly, there doesn’t seem to be a need to make it compulsory as an official language.

As A Young Citizen Of India, I’d Like To See Development In These Aspects