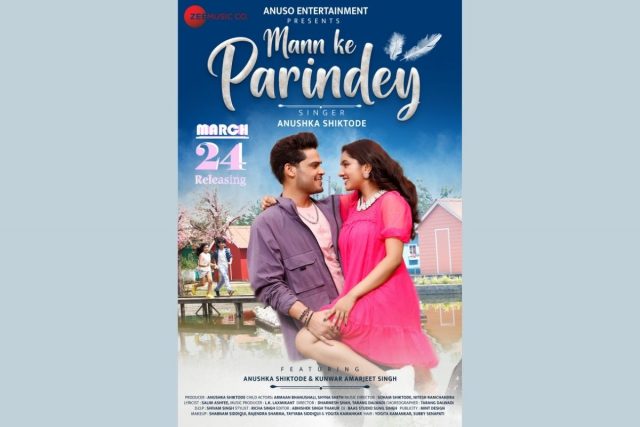 Mann ke parindey song has beautiful lines like “Mann ke Parindey, Todd ke fande khule aasmano me udte hai hum”. The peppy song not only has the beats that make the listeners sway but also gives out a beautiful message through it. “Tapte junoon ke aanch me tapke, badhne lage hai aage kadam” are the lines that make this song a perfect blend of a dance number and a motivational song.

It is not the first time she has brought such pleasant songs for the audience. In 2021, She had released her first single, Saathiya, from T-Series pop chartbusters. This romantic song has a beautiful nostalgic vibe to it. Anushka has sung as well as acted in this music video.

Soham Shiktode has co-produced the song alongside Anushka and played the role of the assistant director as well. The song has currently crossed 8M views and is still being loved by the audience.

Anushka Shiktode gave her voice to “Zaruri Hai”, a rap song by D Abdul. It is India’s first Love drill track with singing as well as a rap. The music video features leading influencers of today like Riva Arora, Adnan Shaikh, Jenny Chopra, and Abdul himself. The music video has received a lot of support and has reached 4 lakh views in a month. Anushka has been praised for her vocals in the song by the audience. Anushka Shiktode makes an entry in the Marathi industry with the song “tik tok varti” that released through T-Series on 17th March 2021. This song talks about people’s attraction towards going viral on today’s social media apps like Tiktok. This song is on T-Series and has received a lot of attention from the audience.

Soham Shiktode makes his debut to the industry as a music director. Soham, 19, though young, is immensely talented and keeps a rich taste in music. This brother -sister duo is set to take over the industry with their upcoming new age songs. The song mann ke parindey is a bubbly-carefree song which has the flavor of teenage love. Anushka and Kunwar both are looking cute in the song. Soham Shiktode is the, music director and video director of the song.

On the release of this song Anushka quoted Soham and she aims to bring fresh songs for the audience. Mann ke parindey is a carefree song with the touch of teenage love. On working with Kunwar Amarjeet she said, he is such a nice and grounded person. We both enjoyed shooting the song. Soham has also a special place in his heart for Amarjeet.He said Amarjeet sir was patient throughout the shoot and the chemistry of Amarjeet and Anushka has come up gracefully.

The brother-sister duo is coming up with two more projects, one is a hip-hop track with Rap and another is a Ghazal.

Anushka and Soham also mentioned that they are immensely grateful to their parents, Mamta and Vijay Shiktode, who are extremely supportive of their music career.

Reviews Brand Voice - May 21, 2022
Counselor Rima K (Author, women & child counselor, Tarot card specialist) She has been awarded among the 40 strongest women for her psychic abilities and fitness mantras...