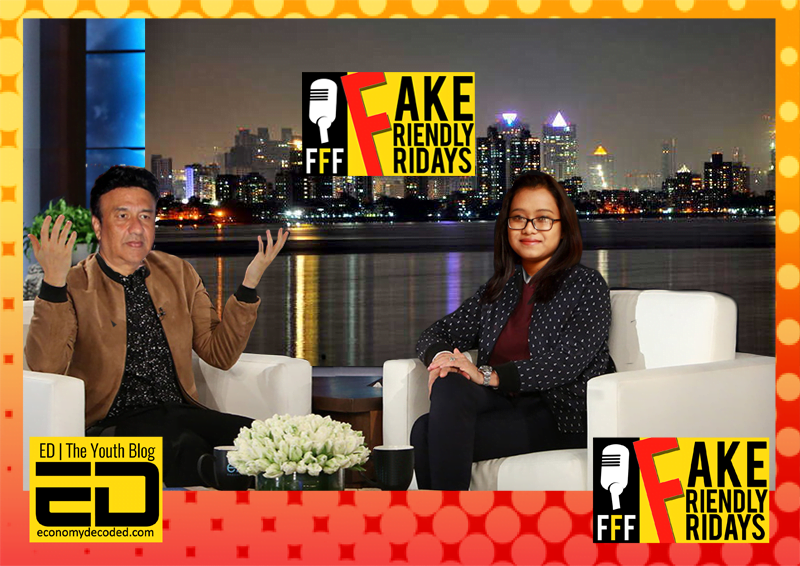 Before you all read our exclusive interview with the Bollywood music sensation (purely sarcastic, trust me) Anu Malik, here is a disclaimer about a content style in ED Times referred to as Fake Friendly Fridays. Here you go:

*camera zooms on the interviewer*

ED: “Good evening ladies and gentlemen. I welcome you all to yet another episode of THE MOST HAPPENING TALK SHOW EVER – Fake Friendly Fridays!

And today, my friends, I bring to you the biggest, the smartest, the most talented music director and singer to ever walk on the face of Earth – ANU….(drumrolls)…MALIK!!!” (loud sound of disappointment coming from the audience)

(Soundtrack to the most horrendous remake of a shitty song – “Oonchi Hai Building, Lift Teri Band Hai” plays in the background)

Shukriya mere priye darshako and special thanks to ED Times for inviting me to this show (which I literally forced you guys to).”

ED: “Umm…. the shayari was totally uncalled for but okay. So, Anu ji, we have heard that Indian Idol is coming soon with its 99th episode. Do tell our audience more about it.”

Anu: (Flashing his weird smile) “Yes, you’ve heard it right. That’s what I have come for. It’s promotion!”

Also Read: Is The Harvey Weinstein Effect Conceivable In The Indian Film Industry?

ED: “That we figured. So tell us what new can we expect in this season of Indian Idol given that it has already broken all records of being the world’s longest-running reality show.”

Anu: “Arre ask what is not new in this season! This season the singers will not only be given a platform to showcase their talent but also a chance to get into fake relationships, complete mindless and idiotic tasks and fight like animals with each other on every trivial issue just like they do in BIGG BOSS!”

(Silent gossiping starts in the audience)

ED: “But I don’t understand the logic behind this type of a singing reality show where less of singing and more of drama will be happening.”

Anu: “Who cares about logic when all you want is publicity for your show! Haha….nowadays what the Indian audience wants is controversies and something stupid to laugh about not a reality show where ordinary people show their talents. That’s boring stuff.”

ED: “Well, no comments on that because I have judged the public’s taste when they made Dhinchak Pooja famous. Ahem, moving on, you have been one consistent judge of this show for years. How’s that? Didn’t the producers ever think of getting a GOOD singer to judge the show for a change? #just saying!”

When Chetan Bhagat can judge a dance reality show then why can’t I?”

ED: “Okaay. So moving on. Why don’t you share your latest musical project with our beloved audience? Which film are you composing music for these days?”

ED: (losing her patience) “Okay, I think it’s time to end the interview here. Please give a huge round of applause for Mr. Anu Malik.”

ED: (picking up her sandal) “Wow Anu Ji, now can I recite a shayari too?”

(Anu Malik runs for his life as the audience cracks up)

ED: (Heaving a sigh of relief) “So this brings ED Times’ exclusive interview with Anu Malik to an end. Do tune in for our FFF’s next episode!

Till then, Alvida, Khuda Hafiz!

More For You To Read: