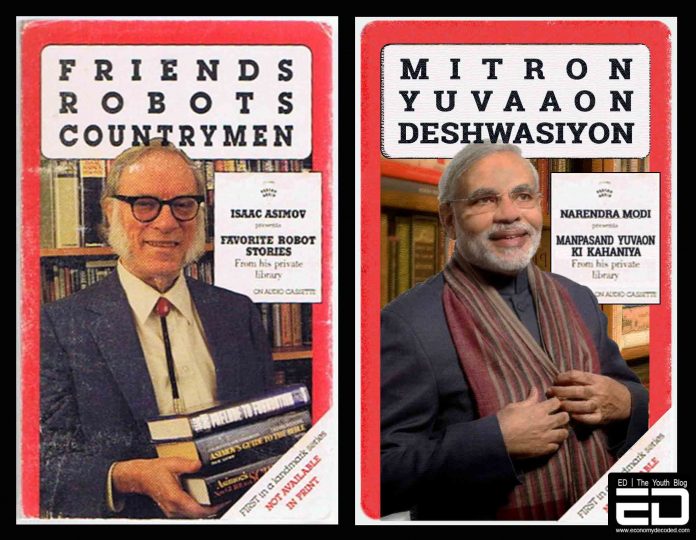 PM Narendra Modi has already authored several books – poetry and prose alike – but, here I have taken the liberty to curate a list of suggestions for his future titles.

Jimmy Fallon recently announced a list of fake book titles that, according to him, POTUS Donald Trump will be launching in the near future.

It got me thinking… If our own PM Narendra Modi were to write books about his many adventures as Prime Minister of India, what would the titles be? In fact, I went one step further and created parody covers for books Narendra Modi should write.

Read on to have a laugh! Referring to the terms of endearment we frequently hear the PM use in his public addresses, this title is inspired by Isaac Asimov’s classic science-fiction novel Friends, Robots, Countrymen.

2. Lord of the Flights A refresher for those of us who are tired of WhatsApp jokes about the Flight Mode in smartphones being renamed to the Modi mode. Since our PM loves travelling the world and has been spending a lot of time abroad, it is only fair to assume he’ll be writing about his travels sometime soon.

And what better title to adapt from, than William Golding’s classic Lord of the Flies? No, I am not talking about a lawsuit! The Million Dollar Suit is a nod to the famously expensive suit worn and later auctioned by PM Narendra Modi. The cover is a parody of one of the titles from The Million Dollar series, Dan Gutman’s series of sports novels for children. I think anyone who has stood in ATM lines after the Modi government’s demonetization announcement will find themselves being able to relate to the forlorn little girl on the cover of Ian McEwan’s Atonement. And the anagram was too tempting to ignore! Making love (and offspring) is something Indians ace at. Why go abroad for that? The cover of Honeymoon in Pondicherry: A Make in India Initiative is inspired by Jojo Moyes’ romance novella Honeymoon in Paris, and urges people to Conceive in India!

Given our PM’s busy schedule, I doubt these titles will hit the shelves anytime soon. But, one can hope!

The Quirks of Being Narendra Modi