World’s leading shoemaker by volume, Bata, is all set to hand over the charge of the company to Mr. Sandeep Kataria as its global CEO. In Bata’s history of 126 years, this would be the first time that an Indian would be leading the renowned footwear brand.

Sandeep Kataria, 49, joined Bata India as the CEO in 2017. During 24 years of his working tenure, he has held leadership positions at various renowned brands. These include Unilever, Yum Brands, Vodafone, Pizza Hut, and Taco Bell.

Before joining Bata, Mr. Kataria was heading the operations of Vodafone India as the Chief Commercial Officer. 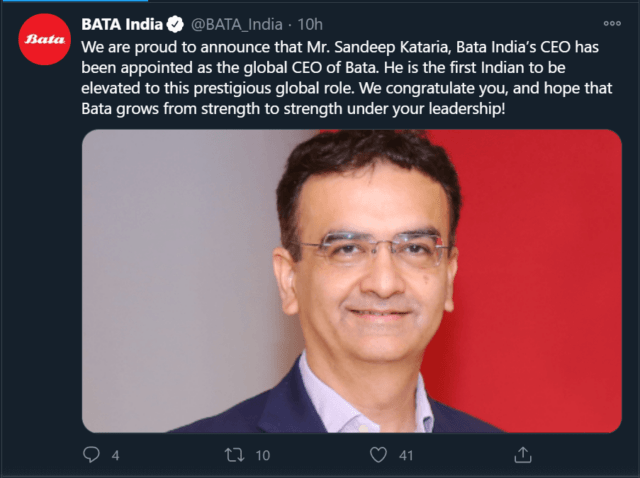 Mr. Sandeep Kataria completed his engineering from IIT Delhi and is also an alumnus of XLRI Jamshedpur. Moreover, he was a gold-medalist of the PGDBM batch of 1993 at XLRI Jamshedpur.

Reportedly, under his leadership, Bata India ran various campaigns like ‘Surprisingly Bata’ to target Indian youth and revamp the brand’s image amongst the customers. The firm registered double-digit top-line growth under Mr. Kataria.

Bata was founded by Tomas Bata in 1894, in Czechoslovakia. It is a family-owned business renowned for designing stylish, high-quality footwear for almost every age group. This household brand is the largest footwear retailer serving over 1,20,000 customers daily.

Bata operates in 70 countries and owns 22 manufacturing facilities that span across five continents. It sells over 180 million pairs of shoes annually. Bata India, the largest footwear retailer in India, offers not only footwear but also accessories and bags. 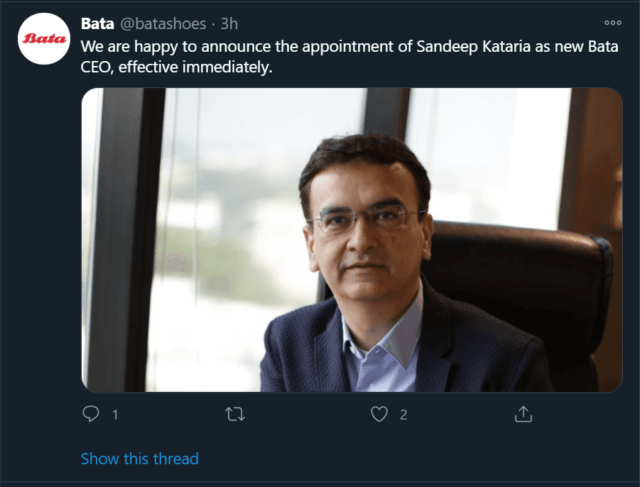 Some renowned brands under Bata India are Hush Puppies, Naturalizer, Marie Claire, and more. Bata has been exploring different channels such as Bata Store-on-Wheels, Bata Home Delivery, and Bata Chat Shop to make its products more attractive and accessible to Indian customers.

The brand has been gaining traction since long and will hopefully reach new heights as Mr. Sandeep Kataria assumes the position as the global CEO with immediate effect. He has replaced Mr. Alexis Nasard who has stepped down from the position of CEO after around five years.

US Is Going Nuts Over First Woman VP In 2020 While UK, India Had Lady PMs Long Before

Sarsai Is A Village In Bihar That Worships Bats

Lifestyle Chirali Sharma - September 11, 2021
Indians or Hindus specifically have always associated great significance to many animal species. The bull is connected with the Nandi bull who was extremely...