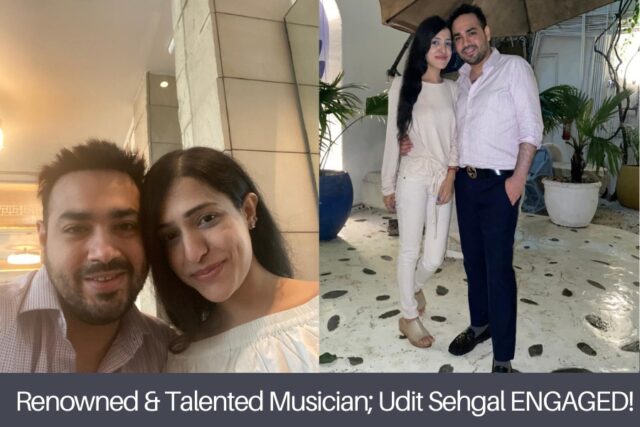 Udit Sehgal started playing the guitar when he was just eight years old. It was indeed a moment of epiphany for him when he realised that he could sing too. Udit became a DJ right after school and then began his musical career. He started his career with ‘Dooriyaan’, released in 2016, and ‘Tu Chal Saath’ soon after. Shortly after, he collaborated with DJ Shadow for the song- ‘Woh’, which came out on T-Series (2019). He released two more tracks by 2020 called ‘Balliye’ and ‘Tanker’. It was only at the end of 2020 that ‘Afreen’ was released that gained him an overwhelming response from his audience. It is around the same time when he realised that he could write too and sing commercial songs. The vibrant singer looks up to ‘Jal’, ‘Noori’, and other Pakistani bands for artistic fervour and inspiration.
The singer recently got hitched to a doctor, Dr. Shivangi Mehra, a family friend, and we all wish him contentment and endearment in this new journey. The engagement took place on the 17th of July this year. It was a small ceremony at his fiancé’s house, keeping in mind the ongoing pandemic relaxations and protocols. Despite being arranged, it is a bond based on mutual understanding, likeness and, compassion.
Talking about varying ventures, one cannot miss out on his latest single release- “Barbaad”. The song is an ardent cry of a lover who has been left alone after myriad promises and hope for togetherness. The song is highly relatable and makes you vibe in with the same. It’s a classic piece that makes you resonate with its lyrics and gripping beats. The song reminds you of that one lover who either didn’t love you back or enough to sustain a relationship. It also describes a holistic journey that one undertakes while dealing with heartbreak.
The song is written by Vanit Bakshi and is beautifully composed by Udit Saxena. It was written, sung, and composed during the lockdown last year, and it releases next month!
Musical instruments like guitar, drums, tabla, piano, and harp have helped bring out the essence of relatability from within the song.
One can say that the singer is whole-heartedly on his way to achieving success and happiness in leaps and bounds. Kudos to his personal and professional achievements. We thrillingly await the official release of the song the following month.