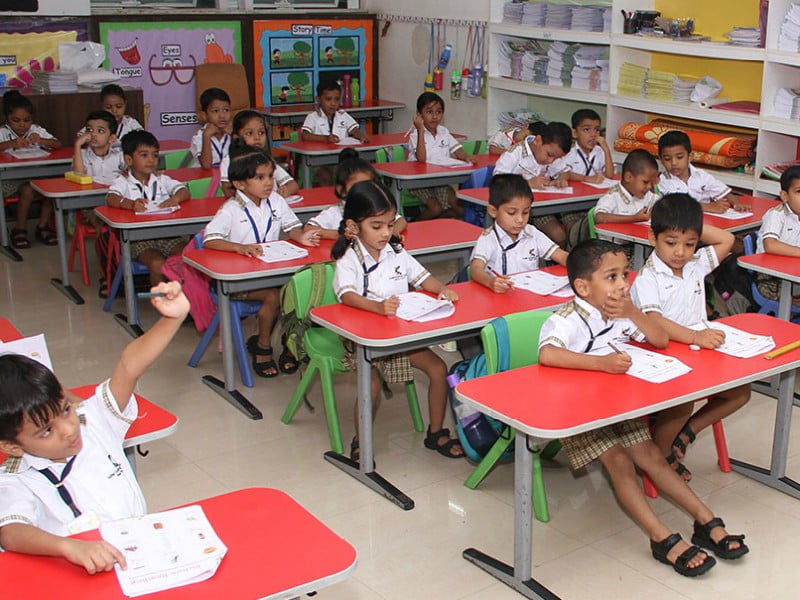 That day, when my sister returned home, she was not her usual chirpy and determined self. I could sense the weariness in her steps and the exasperation in her voice. She had spent yet another day trying to hunt down primary schools for my 3-year-old niece, Sana. Somehow every ordinary school had a long list of demands and qualms, starkly different from the other.

Switching on her laptop in frustration, my sister exclaimed, “I’m writing a letter to the education minister of India complaining about the lack of a proper centralised admission process!”

Soon she found out that India did not have a separate ministry for education or a system for addressing grievances concerning matters of education. She swore it was worse than an engineering admission process.

The next morning at 6 am, I was woken up by Sana’s ‘morning practice.’ I caught sight of my sister, trying to make Sana cram a list of 15 colours, while luring her with a cube of Dairy Milk for every correct answer. The unwillingness and insomnia on their faces was easy to detect, even in a half-sleepy state.

On questioning, I found out that 3-year-old Sana had an ‘interview’ with the management panel of one of the best nursery schools in Delhi. The syllabus for the interview had earmarked colours and organs as important, and the interviewers were going to ask Sana questions relating to those topics.

“What is the colour of your shirt?”

“What are these called?” (the interviewer had said pointing to his ears)

The questions obviously came only after Sana had respectfully and smilingly greeted each member of the ‘esteemed panel’ of judges.

When they returned from the interview, I noticed that Sana looked especially distressed. My sister narrated how the environment of the interview had overwhelmed Sana and when she found her, poor Sana was sitting on the floor, bawling her eyes out.

My sister had planned that she would start working as a research engineer at Kiran Shaw’s Biocon, after Sana joined school to productively utilise her free morning hours. But now she was willing to throw all of that away for a job as a primary school teacher, because of the incentive of admission quotas being offered to the children of teaching staff. They famously call it the ‘point system.’

She narrated that as a part of the point system, schools offered huge management quotas, distance quotas, sibling quotas and alumni quotas, only to make no provision for general seats at all.

A minute later my sister widened her eyes, and spoke with disgust, “Can you believe that 75% of the children belong to the school management’s families? The remaining obviously hail from ‘sufficiently influential’ families that can offer lofty donations!” India is home to 20% of the 0-4 years’ child population of the world and every 1 in 5 of the total number of live births in the world, is in India. The growth in infrastructure of primary schools that is needed to educate such a large number of children is almost negligible.

As a result, the acceptance rates of the existing primary schools are alarmingly low, and the number of aspiring candidates exceed the vacancies by more than 900% even in ordinary schools.

This is not just the case with private schools. By March 2018, more than 6 lakh children had registered for admission into the limited 1,142 Kendriya Vidyalayas. With KVs strictly admitting only 20-25 children per classroom, the probability of securing an admission is almost as bleak as IIT Mumbai. Only about 60% of India’s habitation has basic primary schools. This lack of infrastructure has given birth to many regressive metrics that are used while shortlisting children for primary school admission.

Interviews are not only traumatising for small children, they’re also full of ridiculously irrelevant questions that should not decide whether a child deserves to be educated in a particular school.

Some schools have put in a lottery system to arbitrarily admit children, because they believe that no metric can be used to gauge the aptitude and mannerisms of very young children. Some schools conduct parent-teacher interviews as a part of their final screening process.

Over the years, interview questions and metrics have changed for the better. Earlier parents were judged on their fluency, confidence and education. This was criticized by people who thought that parenting skills were neither about parents’ BBA versus MBA, nor about their English speaking abilities. Nowadays interviewers stress more on aspects that are directly related to the child’s growth. Parents are asked about the amount of time they can take out for their child, and about whether their home environment is conducive and healthy. Such questions have proven to be successful testers of parenting skills.

Why Is The Batman/Inception Director Christopher Nolan In India?