In the latest news regarding Emraan Hashmi’s upcoming film, the censor board told them to change their name before giving their final approval.

Since its inception the movie has been marketed with the name ‘Cheat India’ but suddenly, with barely 8 days to go for the release, it appears that the Central Board of Film Certification (CBFC) has some objection with the title.

The new title for the film is ‘Why Cheat India’.

The movie is directed by Soumik Sen and stars Emraan Hashmi and Shreya Dhanwantary with the plot centering around the Indian education system and the problem of corruption within it.

Already it seems that the movie was reeling from the pre-poning of the movie when it was shifted from 25th January to 18th January and now this has landed on their heads.

Why Is The Censor Board Objecting Now?

It appears that the CBFC examining committee thought that the title could be misleading and encourage cheating.

The makers also had to remove the tagline of ‘Nakal Mein Hi Akal Hai’ along with changing the name, especially considering how close the release of the film is.

Tanuj Garg, one of the co-producers was quoted by Mumbai Mirror stating that, “The Board had concerns about the previous title. We had an extensive conversation about the proposed changes since the theatrical trailer and TV promos have already been certified with the original title. We felt this could lead to dual communication with the audience but finally, in the interest of time, we mutually agreed on a title change.”

Apart from this, CBFC required just one more change of blurring a scene featuring drug use and the film was cleared out.

CBFC’s examining committee first raised the need to change the title, and while makers did mention that the name Cheat India had already been in the public eye for almost 2 years now the board still sent it to the Revising Committee who seconded the decision to change the title.

And to be honest, it is a little suspicious as to why CBFC is asking the title to be changed so late into the game, especially considering there has been absolutely no bashing or controversy around the name till yet.

While the change of Deepika Padukone’s Padmavati to Padmaavat was obvious seeing how many groups were protesting its very release, same with Salman Khan’s production Loveratri that was Aayush Sharma’s debut which also saw objection due to the title being a play on the festival ‘Navratri’.

However, Why Cheat India’s name change makes no sense, but with the movie so close to release, it seems that the makers didn’t want to pick a fight and agreed to the changes.

It is also really bringing the energy around the title down by adding ‘why’ to it and making it difficult to say. Where ‘Cheat India’ was an extremely catchy phrase that instantly connected with the audience, ‘Why Cheat India’ just seems unnecessarily long and doesn’t even make sense as the name of a film.

To advertise the new title, most of the main cast and producers changed their Twitter names to add the word ‘WHY’. 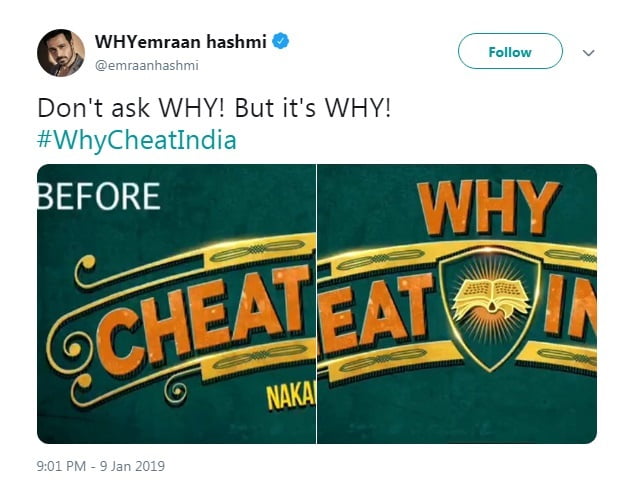 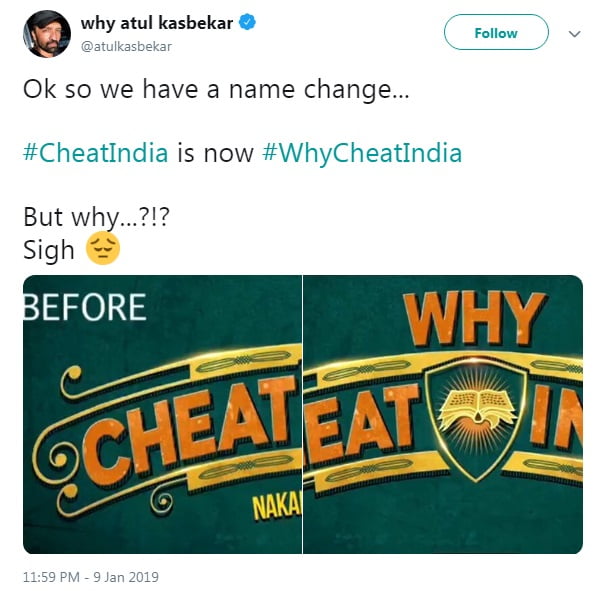 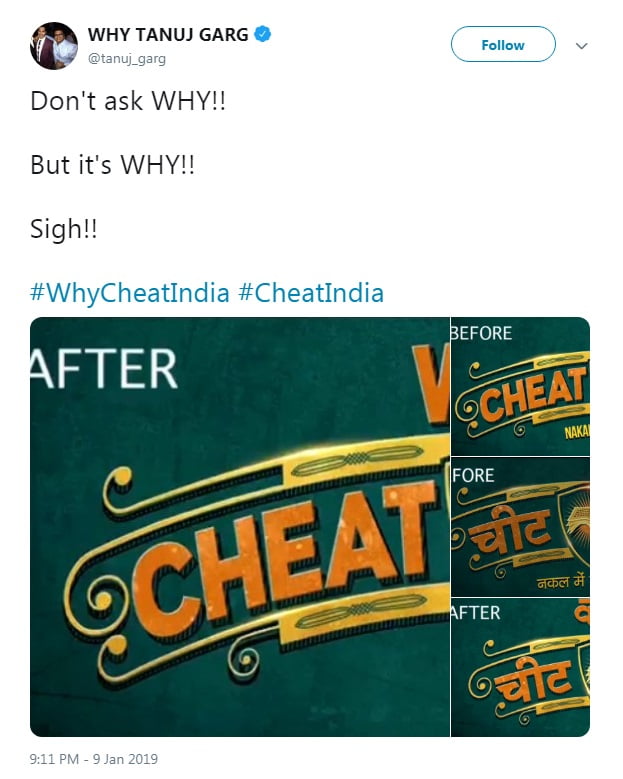 Read More: What Is All This Bollywood Conspiracy Against Him Which Govinda Is Talking About?

Some other people questioned the name change to ‘Why Cheat India’ so close to the release while others joked about it.

So the poor producers who have critiqued India's educational system have been forced to change the name of their film from #CheatIndia to #WhyCheatIndia . The other film, with shady funding and blatant political posturing, is got no problems. This is no accident, guys.

Either way, the deed has already been done, the name has been changed and the movie is releasing on 18th January 2019.

Hopefully, no matter what the title, the film will start some conversation on our crumbling education system and bring about some much needed change.