Why Casting The Correct Actor Matters!

Recently I saw the trailer for the new CBS show Supergirl, aka Kara Zor-El based on the DC comics about the long lost cousin of Superman. While I loved the trailer and unfortunately the leak of the first episode has made most of us privy to the actual content, and the show might have its flaws but the overall premise seems exciting. Who knows it might be a great show. Anyways the trailer was very well received by the audience at the 2015 San Diego Comic Con(SDCC),  but the reason I am writing this article is because of some comments I read regarding the trailer and upcoming show. It was the fact that the character of Jimmy Olsen who in the comics was a red head has apparently been changed to an actor named Mehcad Brook.

Wait wait…At Least Give Me a Chance To Put Out My Reason:

Now before anyone comes at me  with pitchforks raised asking how dare I be a racist, believe me I am all for equality and racism is a true society evil that I am completely against. But talking completely from the view point of a comic book or novel aspect and the way these characters were formed, I believe there has to be at least some authenticity to such characters. 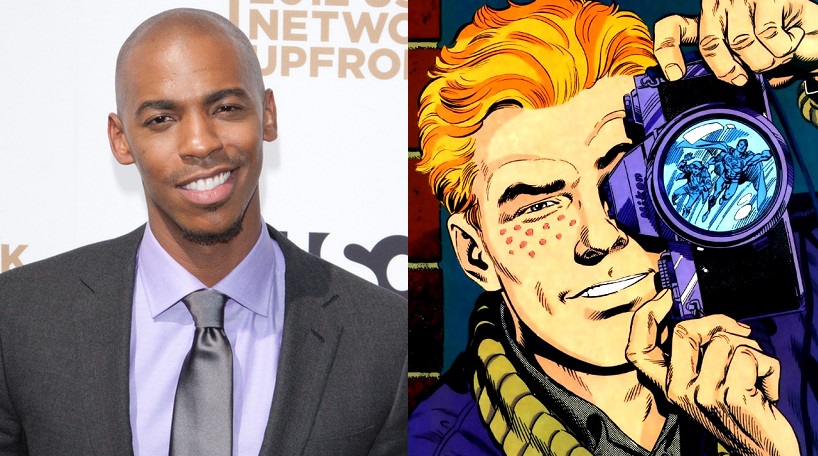 I am a huge book and comic nerd and well, like every fan I have my own favorites and I want justice to be done to them if they are being brought to the big screen or on my television. I believe that casting the right actor for such kind of film, emphasis on such kind, is very important. Characters from beloved books, novels and comic books are held very dearly by the readers of them and any change to them changes the whole image they had to these characters themselves.

Let me make it more clear, when we read a book or novel we immediately envision in our minds how that character will look. Even if we might have the physical description, still each of us will imagine him/her, in a different way. And this is ten-times enhanced in a comic or graphic arts series. Where we can very clearly see the character and don’t have to use our imaginations. So, when movie or series directors cast an actor who does not resemble the original character event the slightest bit, then that is very difficult for the fans of the book or comic to digest.

I iterate again, that I am all for equality and no prejudices against different races. But I also feel that forcing it everywhere just for show, just to present that you are so equal opportunity people and that you don’t discriminate is sort of foolish and it is also using such a real issue for monetary benefits.

There was also a lot of discussion when the new Cinderella movie was released earlier this year, in it there was a black actor who was portraying high official almost a Commander to the kingdom and the Prince.  Now, I have no problem with that, doesn’t matter their color, I believe that a position should be given based on merit, but we also have to keep in mind the time when this story occurred and we then have to think about the mentality and thinking of the people of that time. It would be a pretty fictional world where a person of color could hold such a high and powerful position in the royal kingdom, especially, in that time.

I get that the times are changing, we want to portray equality and diversity in every aspect and perception of people are changing and we want to show that change through our films and television shows and maybe because of that the casting is changing.  However this change is ironic in itself since history is censored and the wrong facts are provided.

We can’t just overwrite the history as and when we want. And its not like there are not brilliant and awe-inspiring characters for non-white people. There are several amazing and great characters for all of us. Not just white people.

Another example of bad casting was Ryan Reynolds in the Green Lantern…but wait that is an altogether different example of a bad movie. Yeah. But still he wasn’t the most perfect fit for the role. I also did not like the casting of Micheal Fassbender and Mia Wasikowska in the movie Jane Eyre. I just…where do I even begin how wrong their casting was. Its too much for one article. But lets just say that it wasn’t the right casting at all.

And if you want the father of bad casting then drum roll please….Ben Affleck. Yes. Need I say anymore? I mean Daredevil could give Green Lantern a run for its money in how bad it was. It almost destroyed Affleck’s career. And now he is back as Batman. I mean I like him as an actor, I mean in Gone Girl and Argo and Good Will Hunting he was perfect. But he is not superhero material. I am sorry to say that but he is not. There are a few more example of bad casting in superhero movies, like The Hulk movies, both of them with Edward Norton and Eric Bana, both great actors but not superhero material.

Not All Is Lost:

Now there are also some very excellent example of casting gone right and by right I mean so superbly right that you feel that this actor was born to play that role. The first example is that of none other than Robert Downey Jr. aka RDJ aka Iron Man aka Tony Stark personified. I mean seriously, RDJ is so alike to the character of Tony Stark exempting the iron suit, but even his own real life is very similar to that of Tony.

Another example is that of Heath Ledger for the role of Joker in The Dark Knight by Christopher Nolan. I don’t think I even need to give any sort of explanation for this one. Ledger’s death further immortalized the character in everyone’s mind. I even appreciated Jack Nicholson’s version of it but with Nicholson I feel that The Shining is a true example of the perfect casting. A few other great casting mentions are Christoph Waltz as Hans Landa in Inglourious Basterds, Marlon Brando as Don Vito Corleone in the Godfather movies.

And since the article is mostly about correct casting for book or comic adaptations then we will focus only on those genres, so on that note, I feel that the casting of Ian McKellen as both Gandalf in Lord of The Rings and Magneto and Patrick Stewart as Professor X is something worth mentioning in the X-Men series. Mr. Leonard Nimoy as the pen-ultimate Spock for the Star Trek series. Michael Clarke Duncan as Jon Coffee in The Green Mile is one of those characters that was so perfectly cast. He is a giant, yet he had this air of innocence around him.

Also how could I forget Samuel L. Jackson as Nick Fury head of the fictional organisation S.H.I.E.L.D. I know that Morgan Freeman can play a dishwasher and be good at it but his performance in the 2009 sports drama film Invictus essaying the role of Nelson Mandela was so touching and so true that it was hard for me to imagine anyone else having the same talent and ability to essay that role with such finesse.

Yes, We have Some Casting In India Too:

A few people from our own country too can be mentioned for example,  Dr Rajkumar as Hiranya Kashyapa, Mukesh Khanna as the superhero Shaktimaan, Nitish Bhardwaj as Lord Krishna in the evergreen B. R. Chopra’s 1988 series ‘Mahabharat‘.

Also the 1993 Doordarshan show Krishna or Shri Krisha’s casting of Swapnil Joshi as a young Krishna was amazing. He fit the role to a tee. A more contemporary version of Krishna was the recently concluded Mahabharata series, in which the role was essayed by Saurabh Raj Jain, so perfectly he found instant stardom because of it. And how can I forget the mega popular show ‘Devon Ke Dev…Mahadev’ where Mohit Raina who essayed the titular character was so perfectly cast that it truly looked as if Lord Shiva himself had come down from Mount Kailash. The show enjoyed a vast amount of audience and is considered to be one of the most critically acclaimed shows in India to date. So in the end what I am trying to say is that for such texts like books and novels and comics, the characters are very close to the readers and when the makers of the movie adaptation tamper with the characters physical description then no matter how good of an actor they are, they still won’t be able to completely win over the audience.

I again repeat, please don’t think of me as a racist. I am completely against it, but being a huge book worm I hold many of these characters dear and well, although for me the book will always be better but I at least don’t want to be shocked that they completely changed the person only. I want to see my favorite characters come alive on screen. But I also want them to be authentic.

Not everyone can be a Daniel Day Lewis, a Meryl Streep or an Ashok Kumar who can essay any and every character so flawlessly that you as an audience won’t have any troubles with it.