Congress supporters were rejoicing when Priyanka Gandhi was appointed as the General Secretary of All India Congress Committee on January 23rd, 2019, taking up Eastern Uttar Pradesh.

She was presumably that ‘ray of hope’ Congress desperately needed to make a spectacular comeback in Indian politics. People had a lot of expectations from her and even dubbed her the ‘game-changer’ or the ‘Brahmastra’ of the party.

However, it is almost a year since she took the charge of a full-time politician and her performance is disappointing. 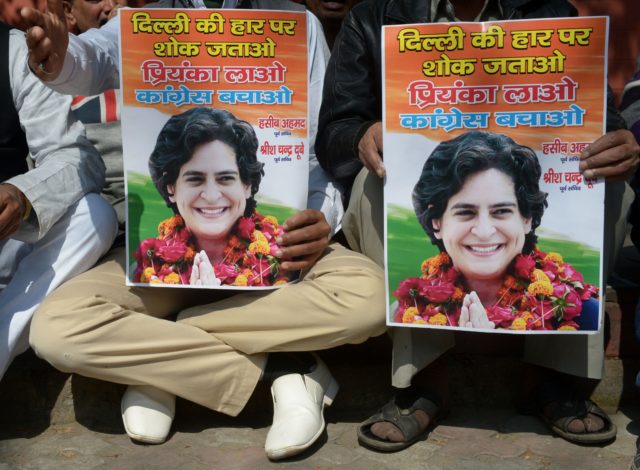 We assessed the full term of Priyanka’s leadership so far and can say that she is more of an ‘aperiodic’ leader, following in the footsteps of her brother, Rahul Gandhi.

Priyanka Gandhi has turned out to be an erratic leader and has failed to show consistency in her work.

Such a pattern was noticeable since the start of her term when one day she was all over the news and then all of a sudden she disappeared.

It can be said that Priyanka’s role as a politician is spontaneous i.e bringing too much energy at a crucial time and whining about burning issues only to make it to a prime time headline followed by an unjustified period of hibernation.

She made a bang-bang debut into politics by her hyped up visits to UP, her promise to interact with the people and solve their problems and her night-long meetings with party workers. Everyone was enthusiastic about Priyanka’s working style and imagined that Congress’ Lucknow office lights will never be turned off. 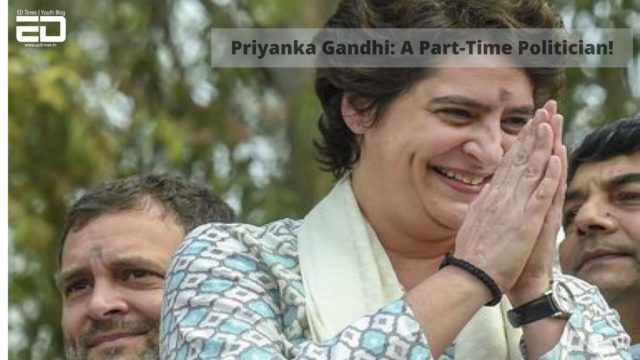 Two weeks after her appointment as AICC’s chief representative, Priyanka was all set with her notes talking about the real problems, internet presence, party’s image, etc. Her poise was intimidating and she pretended to be the face of the Congress in UP.

Right when Congressmen believed that Priyanka Gandhi will be the oar to their sinking boat, she decides to sit cut and took an unannounced break from her position i.e not acting as per the norm.

Since then, it has been Priyanka’s style to show her face once in a blue moon, excite the people about her next move, create suspense and then sit back.

Why A Part-Time Politician?

She is often referred to as a ‘part-time politician’ due to her strategies of being an occasional politician on matters that steal the limelight. Not only this, her actions are purely political that defy her promise of being a ‘people’s leader’.

She can be seen everywhere these days. From meeting the families of people injured in Anti-CAA protests to consoling the students attacked by ABVP goons at JNU and also extending support to students of Banaras Hindu University and at AIIMS, Delhi to bolster those affected by the violence at Jamia Millia Islamia.

To put it bluntly, Priyanka is back with her sudden outburst of political interest and is making her presence against the opposition after a long break.

However, it seems to be an extremely political move on her side, making use of the situation against the Modi government as she took no accountability over the Kota hospital case where 110 children died.

Read Also: Our Attitude Towards Priyanka Gandhi Shows We Are Not Yet Over Our Medieval Past

Rajasthan, being a Congress-ruled state saw no glimpses of the lady leader when it was a much-needed thing to be done as per her role.

Priyanka Gandhi is always seen bouncing from places to places looking for ways to seize the moment against the opposition but has never shown any real work done around the development and growth of her ally.

Consequence Of An Episodic Leadership

Learning from her actions and selective leadership style, Priyanka’s intermittent appearance as a Congress representative is a cardinal debate in terms of Congress’ future in the political regime.

She took the demanding role of a general secretary of such a prestigious party with no former education or experience around politics. Although she was warmly welcomed by her colleagues and given utmost hype, still governing such a huge state of UP was a dicey move and she had been disappointing with the same.

After observing the Gandhi lady for a year, the ruling government made good use of her erraticism and have targeted her for her disappearance at rallies or public events.

Not only this, recently BJP made a statement against Priyanka and declared her presence as harmless in the upcoming elections. They not only mocked her as a mum show but also commented on her part-time politician like work.

Surprisingly, a similar pattern has been observed in Rahul Gandhi’s political career too. His baseless arguments and impulsive statements lack developmental politics which has become the joke of the nation.

With both the faces of the Congress being so casual with their work, it’s high time for the party to reconsider its political strategies and work on its organisational weakness before it gets too late.

If Congress Gets A Non-Gandhi President After Rahul, Will He/She Not Be A Mere Puppet?