Home Politics WHO’s Director General’s 7 Countries List We Can Learn From For COVID-19... 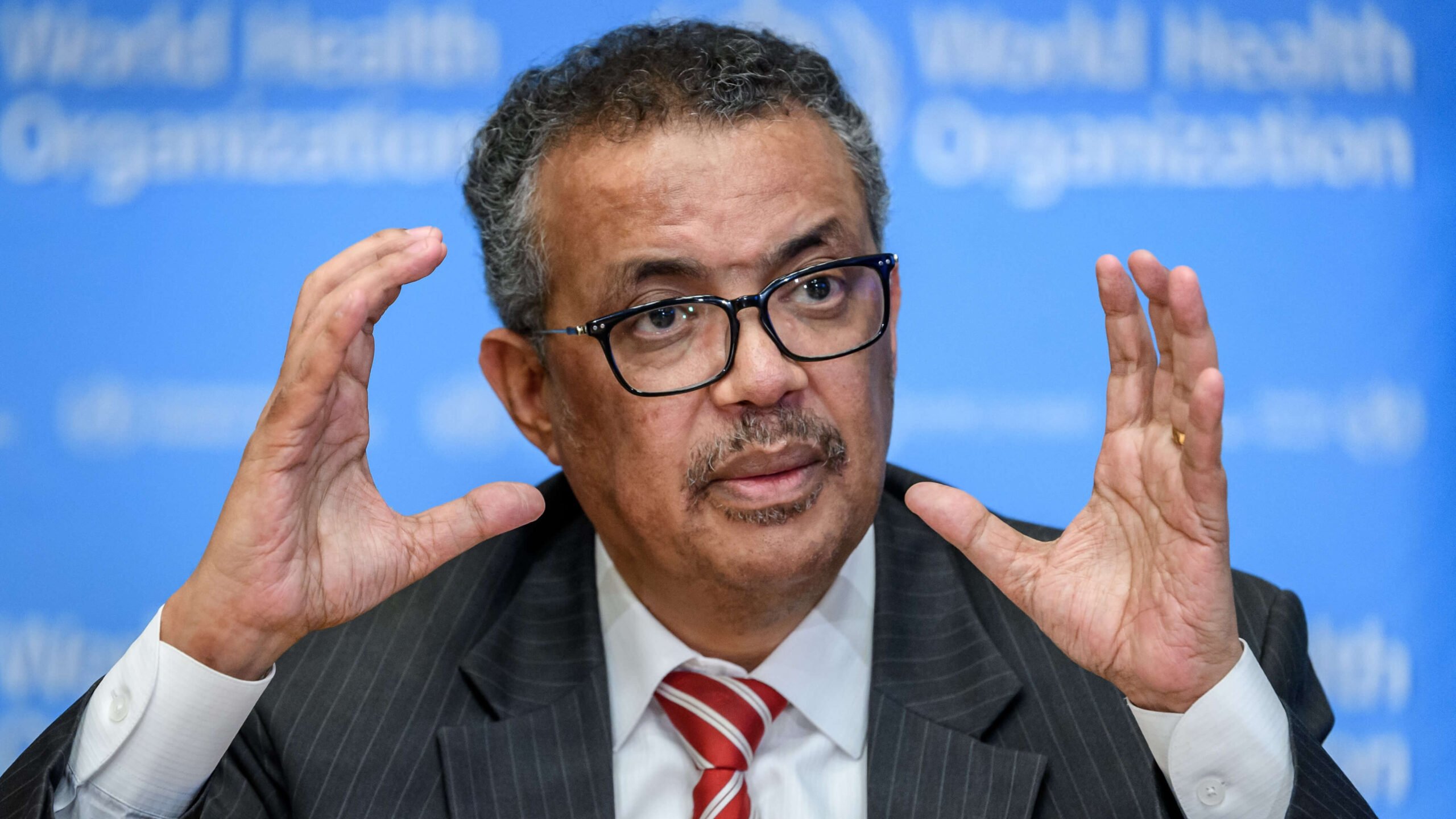 In a recent media briefing regarding the pandemic, the Director-General of WHO (World Health Organization) Dr. Tedros Adhanom Ghebreyesus mentioned a few countries we need to learn from to combat pandemics.

The Director-General also said that we need to stay better prepared for another pandemic as they are a fact of life. He said, “History teaches us that outbreaks and pandemics are a fact of life. But when the next pandemic comes, the world must be ready – more ready than it was this time.”

He mentioned 6 countries who we need to learn from; Italy, Pakistan, Uruguay, Mongolia, Mauritius and Thailand.

What I find confusing is that many countries were left out in his speech and lack a true picture of the whole scenario.

Here’s why it is difficult to believe the statements made by the Director-General:

Earlier criticisms of Dr. Tedros Adhanom Ghebreyesus for underplaying the role of China in the pandemic

WHO was widely criticised for delaying the declaration of a pandemic and the Director-General was ridiculed for underplaying the threat of the contagion to mankind.

According to a report, he also praised the Chinese leader Xi Jinping for transparency even though there was evidence that Chinese officials had undercounted the number of cases while it was spreading throughout the country.

WHO’s team, which was sent to investigate the origins of the virus, concluded its visit without going to Wuhan, where the virus is said to have originated.

The criticisms Tedros Adhanom Ghebreyesus has received in the last few months for the handling of the pandemic make it even more difficult to believe him.

Pakistan’s appreciation seems to be problematic

While the flattened curve of Pakistan for coronavirus cases is something appreciable, questions were raised at the credibility of the data. 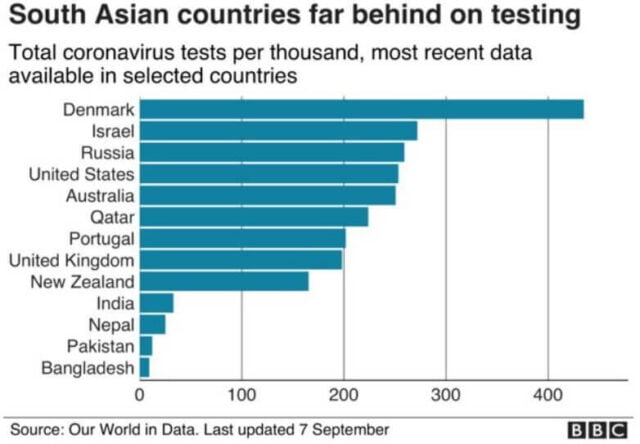 The testing levels are very low in South Asia and it can be listed as one of the reasons for the flattening curve. WHO has set a benchmark range for adequate testing of between 10 and 30 per confirmed case in a country or region, and according to a BBC report, Pakistan does not meet the minimum requirements set by WHO itself. 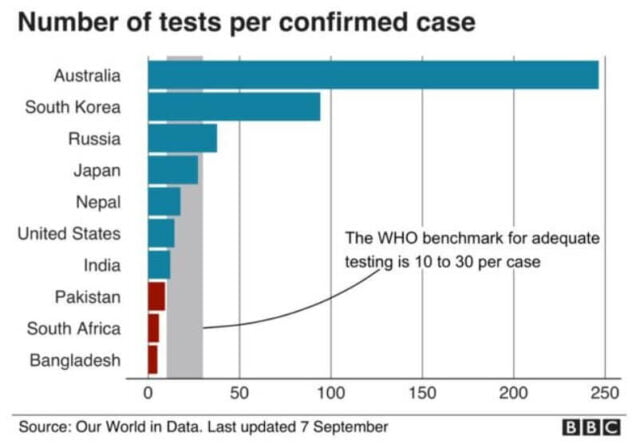 Another reason for questioning the reliability of the data provided by Pakistan is misreporting the number of cases at lower levels of administration. A report by Times of India mentioned how low testing levels and wilful misreporting hides the true picture.

The report also mentioned a government official who reported only 34 cases instead of 64 as per a direct order by his superior.

Read More: This Report Tells Us The Estimated Dates When The Coronavirus Pandemic Will End For Various Countries

One can further question it due to the increased levels of burials. A BBC report states that there were 1176 burials in June this year and only 696 last year.

The sudden decline in numbers also seems too good to be true because earlier this year a report by The Wire cited that Pakistan failed to put the money given in international grants to good use.

A report by the Human Rights Commission also stated that “the government’s overall response has been marred by inconsistent messaging at the top.”

It had received $1.386 billion by IMF (International Monetary Fund), $650 million by Islamic Development Bank, $2 billion from World Bank in early April and many more packages to handle the pandemic.

Despite receiving all these funds, medical staff have protested against non-provision of even basic healthcare kit, sanitizers and gloves. 46% of the Pakistani population lives in areas where they do not have access to water and soaps.

Another report mentioned that each country has a different measure of what counts as a positive case of coronavirus. This was explained by a virologist Jacob John. In Pakistan, they have tested only sick people and in India, they even tested asymptomatic people.

How is it then the curve flattened at such a rate?

The media briefing by Tedros Adhanom Ghebreyesus did not specifically focus on 7 countries but rather appreciated the handling of a few countries and the lessons we need to learn from it.

Even WHO hasn’t posted anything specific related to a list of “7 countries”.

Interestingly, there has been no media coverage by other countries who were praised by the Director-General in his speech. The only media reports are simply the ones covering WHO’s meeting.

I also tried to find corroborating information in credible media on the cases, death rates, mortality ratio, recovery rate, COVID-19 graph of the 6 countries mentioned by WHO’s DG in this media briefing, but apart from 1-2 of them, there was nothing to be found in public space.

Left out many countries who dealt with the pandemic better

Out of the countries mentioned, Uruguay has dealt incredibly with the virus and is the only country in Latin America to have avoided a widespread panic, Mongolia hasn’t recorded a single death due to coronavirus, and Germany has been appreciated worldwide for its approach.

But still, the Director-General failed to appreciate many countries who have been successful in dealing with the pandemic.

A graph by Trading Economies compares the number of cases between Japan, South Korea, Pakistan and New Zealand. 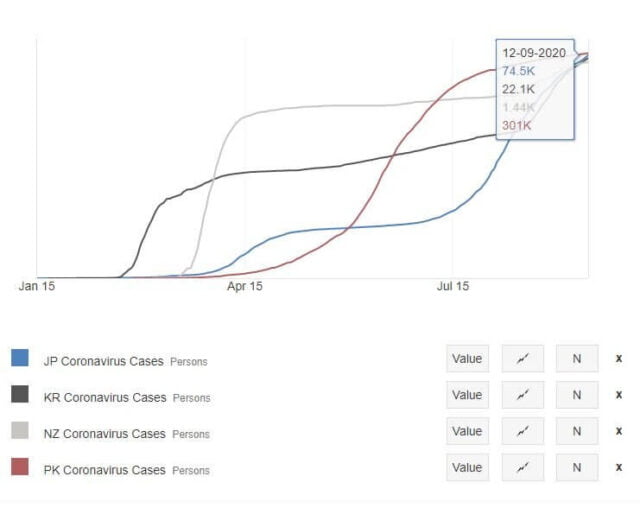 New Zealand showed the best recovery rate and even achieved 0 cases once but it did not get due appreciation in his speech. South Korea too had started to show an increasingly downward trend in the number of new cases since April when in other countries cases were rapidly increasing. 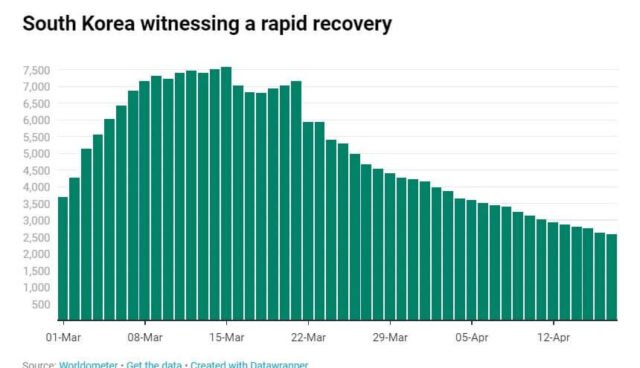 Singapore, Taiwan, Australia, Canada and even Iceland have had the best global responses, according to a report.

One is bound to doubt the reliability of the WHO’s Director-General. Do you think other countries should’ve been appreciated and the WHO hasn’t been giving its best during the pandemic?