India is blessed with a diversity of art and craft styles that has its history rooted in centuries of cultural practice. Madhubani is one of India’s most versatile art forms which belong to the common folk, that has thrived in the Madhubani district in Bihar for around 2500 years.

Madhubani is also a reputed region in India that has paved a way towards protecting the environment from loggers by utilizing this very art form. Instead of hugging trees, the women of Madhubani are painting and creating art on them to prevent them from being felled! 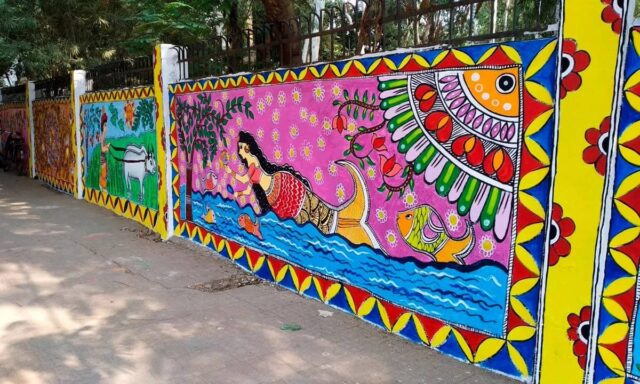 Mostly a skill that women in the region possess, Madhubani has become a cultural movement that has contributed to women’s upliftment and the protection of the environment in Bihar.

Bihar is considered a landmark for mythical origins and religious values – Buddhism, Jainism and Sikhism have their history with the region. It is also believed that Maharishi Valmiki, the author of the popular narrative of Ramayana, hailed from here.

Many stories suggest that Sita, the daughter of King Janak and wife of Rama, was born in the blessed land of Mithila, of which Madhubani is a part.

It is believed that King Janaka commanded an artist to paint his daughter before she was wedded to Rama, and this seems to have founded the art form that is still present in the interior walls of many old buildings in the region.

Today, Madhubani is a defining cultural practice in Bihar; all kinds of handicraft that originate from the area – arts, crafts, textiles – adorn Madhubani’s artistic features.

The City of Madhubani

Ram Janki Temple is one of the most popular tourist attractions in the town with a vivid and elaborate canvas of Madhubani paintings. Hand-painted by the local community, it has scenes from Ramayana on its pillars and walls.

Madhubani paintings in public spaces such as walls, schools, and buildings are not new to the region. To promote the culture of the place, people in the district have coloured and painted the city with Madhubani art, which has also prevented the defacement of these spaces.

One can also find paintings in the most unsuspecting places – houses, bathrooms, and abandoned walls – even the poorest people, especially women, practice Madhubani as a hobby.

Today, there are more than 100 painted trees along the NH 52 highway in the said district. Many women in the region participate in this exercise since they have the skill to paint, as it has been passed down in families for generations – children are taught the art style from a young age.

Since Madhubani is a significantly religious location for many Hindus, people who live here are also profoundly influenced by spirituality.

The women who are part of the environmental movement paint the bark of trees with images related to Hinduism, such as gods and goddesses, to attribute an extreme religious value to the trees.

It is believed that people do not dare to touch and feel a tree that might have spiritual significance. 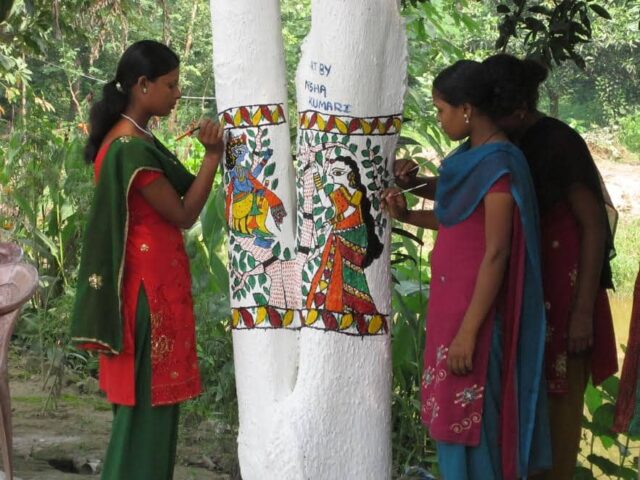 For a very long time, the green forest cover had started to diminish due to the frequent logging that underwent in the area. Bihar has the lowest forest coverage in India – a staggering 7% of the total cover.

Shasthi Nath Jha, secretary of a self-help group called Gram Vikas Parishad, observed the problem and founded the movement with the women’s help in the region.

In 2012, he started addressing the issue by spreading awareness about the same and inviting girls and women from different age groups to join the purpose. 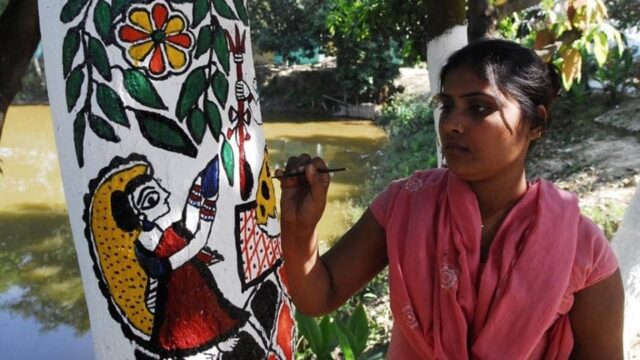 Madhubani has also come to define and promote the upliftment of women in the region. Many women, such as Karpuri Devi, Dulari Devi, and Mahalaxmi, have taken tremendous efforts to keep the art form alive by educating other women in the village.

The government has also commissioned them to work in the Mithila Museum in Japan.

Sita Devi was given the National Award in 1969, while Jagdamba won Padma Shri in 1975. Recently, Dulari Devi was also given the Padma Shri award for empowering rural women to make their ends meet by making intricate and beautiful paintings.

Her work also combines tradition with modernity as she addresses many issues such as child marriage and HIV.

Now a tourist destination, Madhubani is indeed an inspiring place and deserves more attention from us.