Richa Chadha shared the poster of her new movie ‘Madam Chief Minister’ on January 4th that attracted a lot of criticism and questions.

Amid the controversy, the trailer of the movie about an ‘untouchable girl’ who rises above the difficulties and becomes the Chief Minister of Uttar Pradesh, was released today.

Both the poster and the trailer have drawn a great backlash from the people on the internet.

The movie is supposed to be a ‘fictional story’, but the trailer indicated that the movie is nothing but a stereotypical representation of a Dalit woman with a cliché narrative.

Produced by T-Series and Kangra Talkies Production, and directed by Subhash Kapoor, this fictional story is all set to release on January 22, 2021.

Another Stereotypical Representation In Bollywood?

A few weeks earlier, the trailer of Adah Sharma’s ‘Pati, Patni Aur Panga’ was criticized and boycotted for its extremely problematic representation, now, questions on Dalit representation in Madam Chief Minister are being brought up. 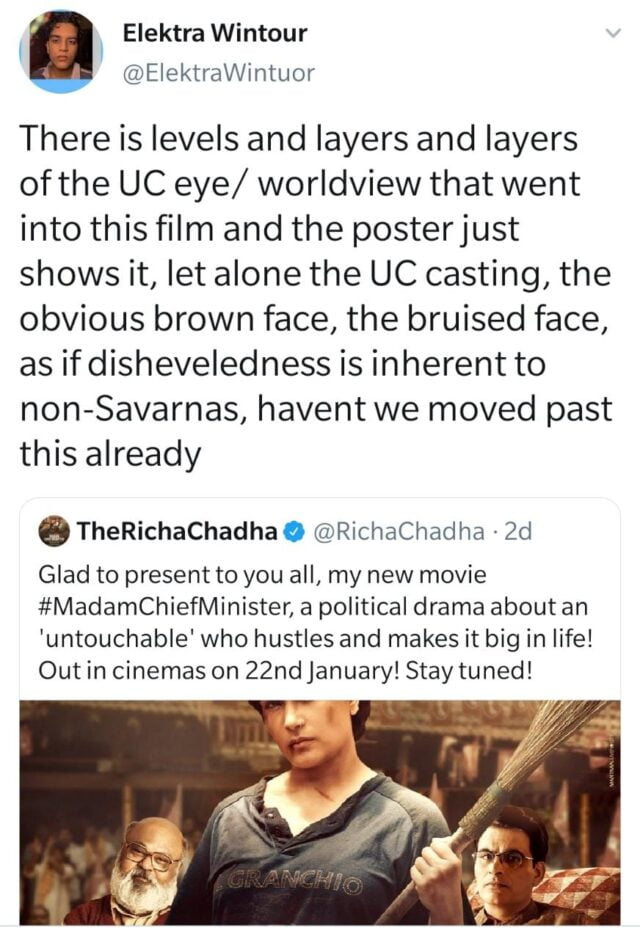 The casting of the movie is disappointing as an upper-caste actor is role-playing a Dalit.

“Name one movie where an Upper Caste protagonist’s role has been played by a Dalit without inviting any controversy”; “Why is a ‘Chadha’ playing the role of a Dalit woman,” asked people on Twitter. 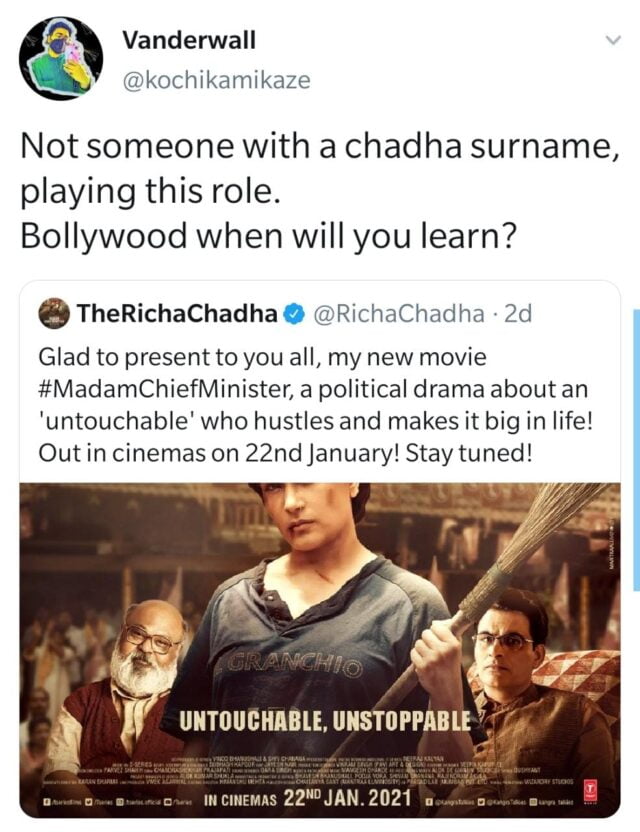 Some people are also speculating that the movie is loosely based on Mayawati, UP’s former CM, and the depiction of the protagonist’s life is ‘misleading’ and disrespectful to Behen-Ji. 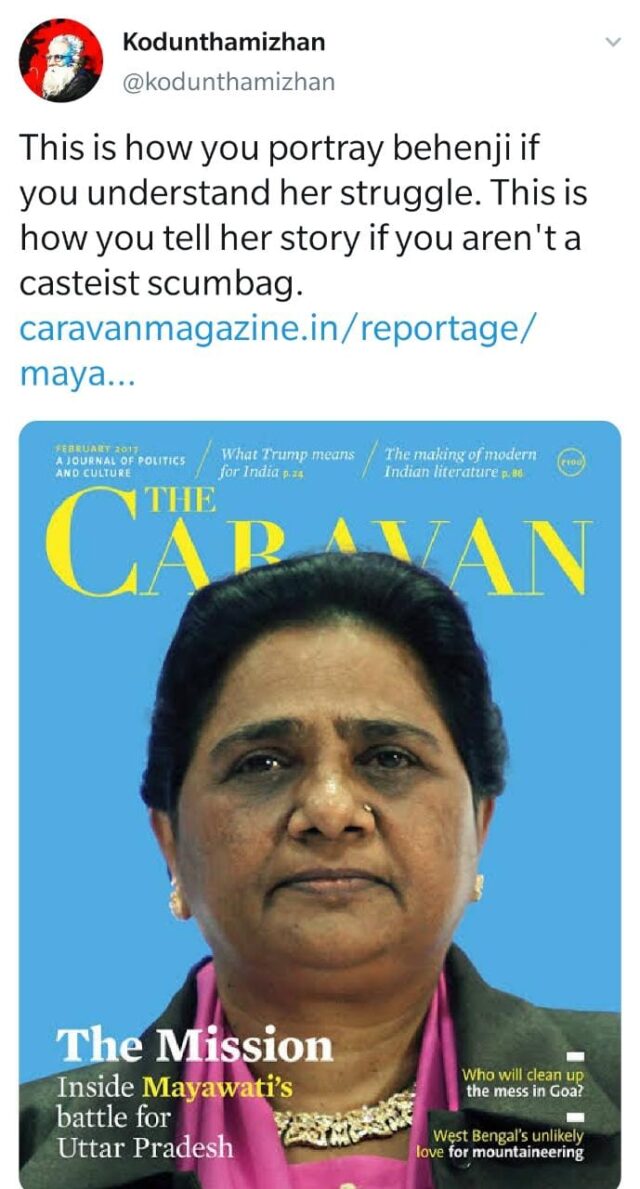 Stereotypical Bollywood representation goes against how Dalit people represent themselves. The Dalit narratives are overlooked by the producers of B-town, and usually, the movies are made from a commercial point of view with no authenticity or real representation.

The mainstream ‘rising through the barriers’ to make it big becomes the key to the 100-crore club. 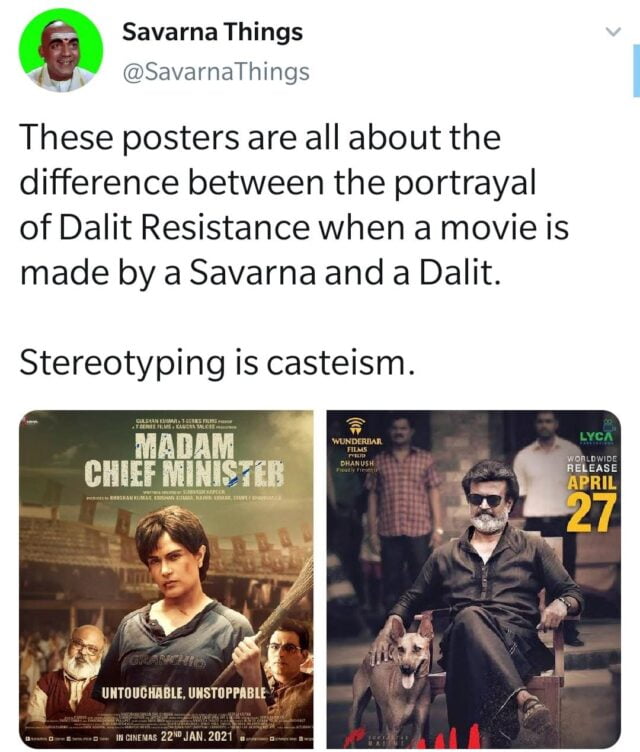 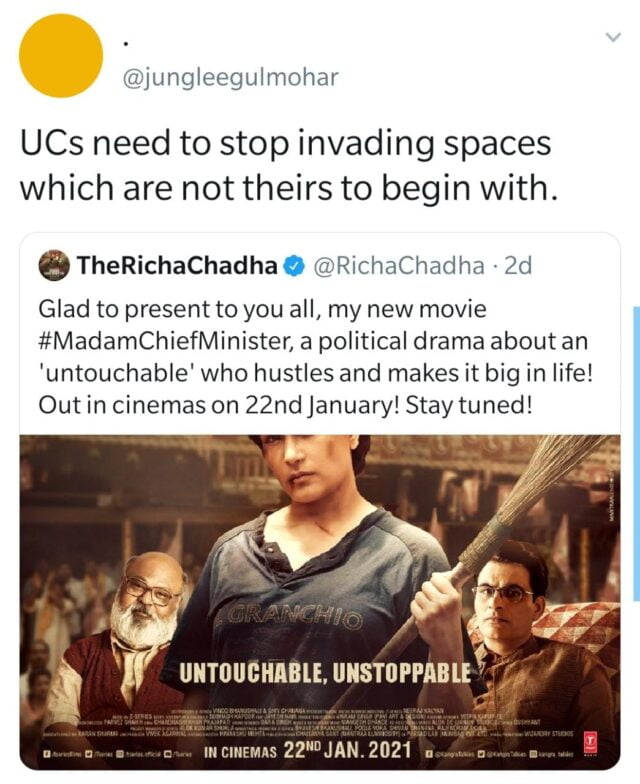 Another bunch of Twitterati is pointing out the portrayal of Dalit as a ‘helpless victim’ in the movie Madam Chief Minister created by ‘Savarna directors’ in contrast to stories of Dalit resistance as portrayed by Dalit creators and filmmakers. 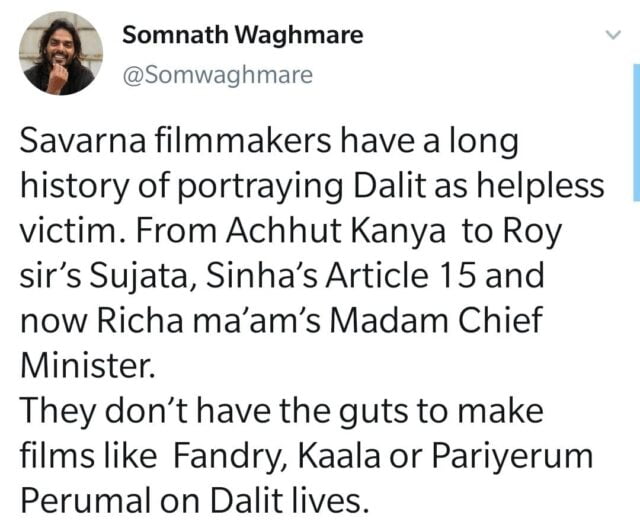 Also Read: In Pics: You Won’t Believe These Movies Were Sent For Oscars From India

The broom in the poster has confused and angered people.

Was it really necessary to show a Dalit leader with a broom? Or to represent a Dalit with a broom to give social cues? people asked.

The ‘fictional’ movie seems to draw inspiration from Mayawati’s life, people think that the broom is a ‘derogatory manner’ to show the Dalit leader.

The trailer of the movie shows a runaway Dalit girl who is given shelter and support by “Master Ji” played by Saurabh Shukla. Richa Chadha is seen cleaning and doing Master Ji’s housework then growing up to become a fierce Dalit leader with powerful enemies.

Richa Chadha Replies To The Critics

The actor replied to the people who called the script “casteist” and said “You really expect me to turn down rewarding, meaningful work? That’s just absurd… You’d rather this kind of story not be told at all? Sir, you may live in a perfect Boston world, we live in Bombay, where progress > perfection. Humein casteist keh diya, ab kya baaki. gbye.” 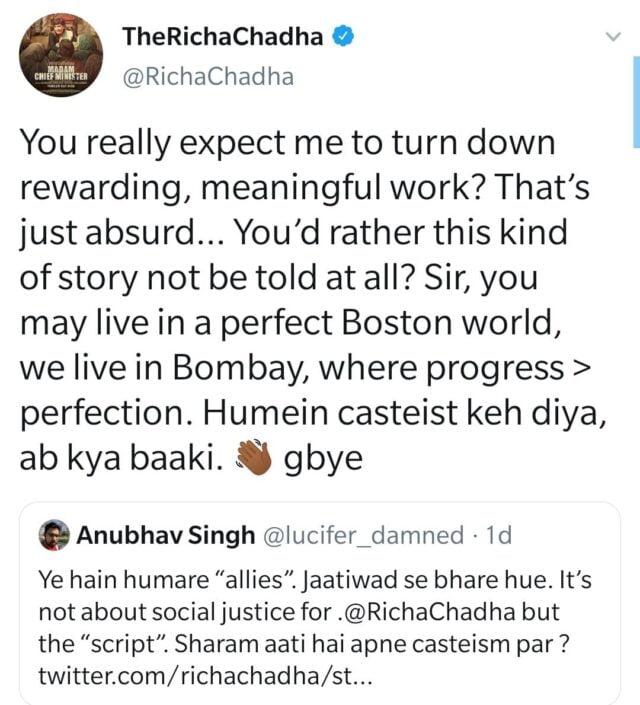 Ater constantly defending the movie, people also accused the actor of gaslighting the audience with terms like “cancel-culture” to which she replied, “People that haven’t the faintest clue about how films are made, cast, promoted lampooning an actor is what’s downright ridiculous Sid. The criticism is misdirected and premature. Gaslight I did not. Bring me down from the pedestal, I don’t need the burden of these expectations.” 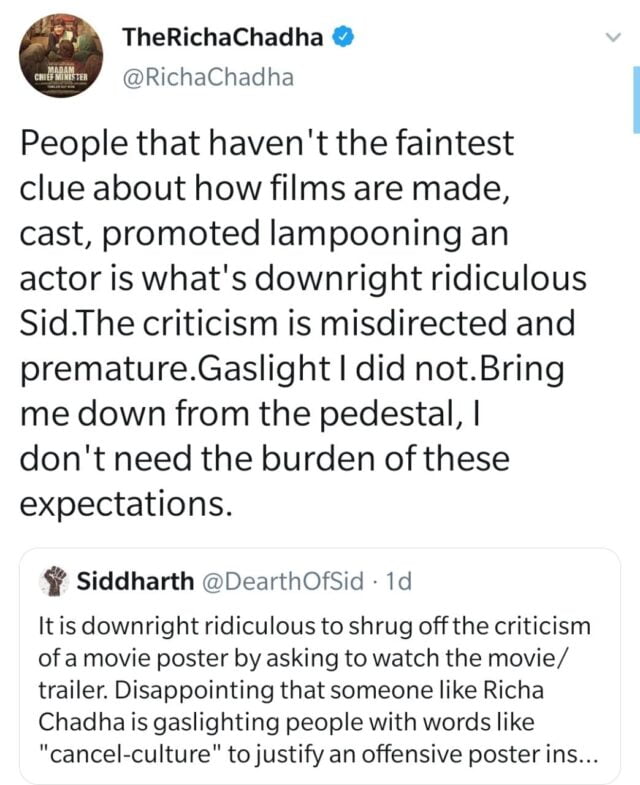 Despite the backlash, many Bollywood actors have supported the movie and appreciated the actors.

According to Richa Chadha, the narrative need not be perfect if the story is progressive. But can we call a movie on Dalits or other discriminated groups that does nothing but reinforce stereotypes, progressive?

‘Madam Chief Minister’ might not be as harmful as ‘Pati, Patni Aur Panga’ but the similar ignorance in Bollywood is alarming.

The need for correct social representation is essential for the empowerment of any community and an honest story can only be portrayed rightly when told from people’s point of view from the said community.

People Are Cancelling Warner Bros. Movies And Here’s Why