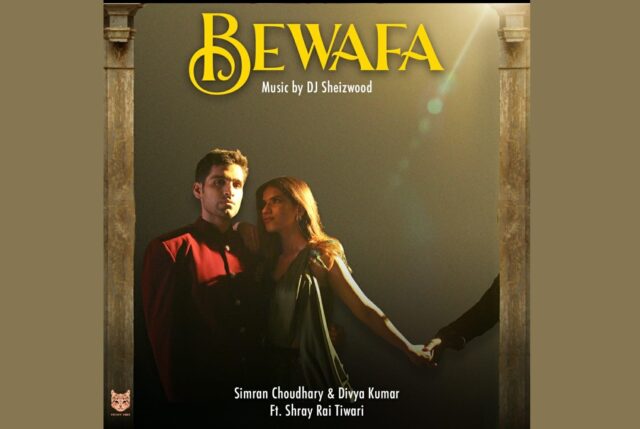 July 26: Miket Kanakia launched the new track under his label Velvet Vibes with singer Simran Choudhary and Divya Kumar that also features actor Shray Rai Tiwari in the lead. This love saga is all about love, insecurities, and betrayal. This newly launched by Velvet Vibes is unfolding the dark side of immense love, mistrust, and lack of communication in a relationship. DJ Sheizwood has done true justice with the music that will surely string the chords.

Talking about the song, Miket Kanakia, CEO Velvet Vibes says,” Bewafa song is different from all other songs. Also, I like the concept of the song. In the songs that we are releasing, we are trying to make it different in every way possible, and in Bewafa we have added some twists that make it more interesting.

Singer Simran Choudhary says,” Bewafa is a story of love with a tint of betrayal, one that isn’t very prominently visible but keeps itching the relationship within. It plays around human psychology, mistrust, and lack of communication in a relationship. I’m so proud to be associated with Velvet Vibes. It’s so hard to find people who’d believe in breaking the stereotypes and Velvet Vibes is definitely up in the game. The journey has just begun. It’s going to go a long way.

Talking about the song and also sharing his first experience with Velvet Vibes, actor Shray Rai Tiwari says, “My first experience with Velvet Vibes was shooting Jaana Zaroori tha and it was enticing to see a music label care about such an issue. I had a great time shooting with them. Bewafa is the second time I will be collaborating with them and in our industry second time is only possible if the first one was great. I am happy to be able to shoot with Miket and his team. They are good at music and slowly making waves in the music industry.”

The song is produced by Ketan Kanakia and directed by Rachita Gorowala. Suruchi Sharma is the Creative Director of the song.

This exclusive song is available on YouTube and other DSP platforms.