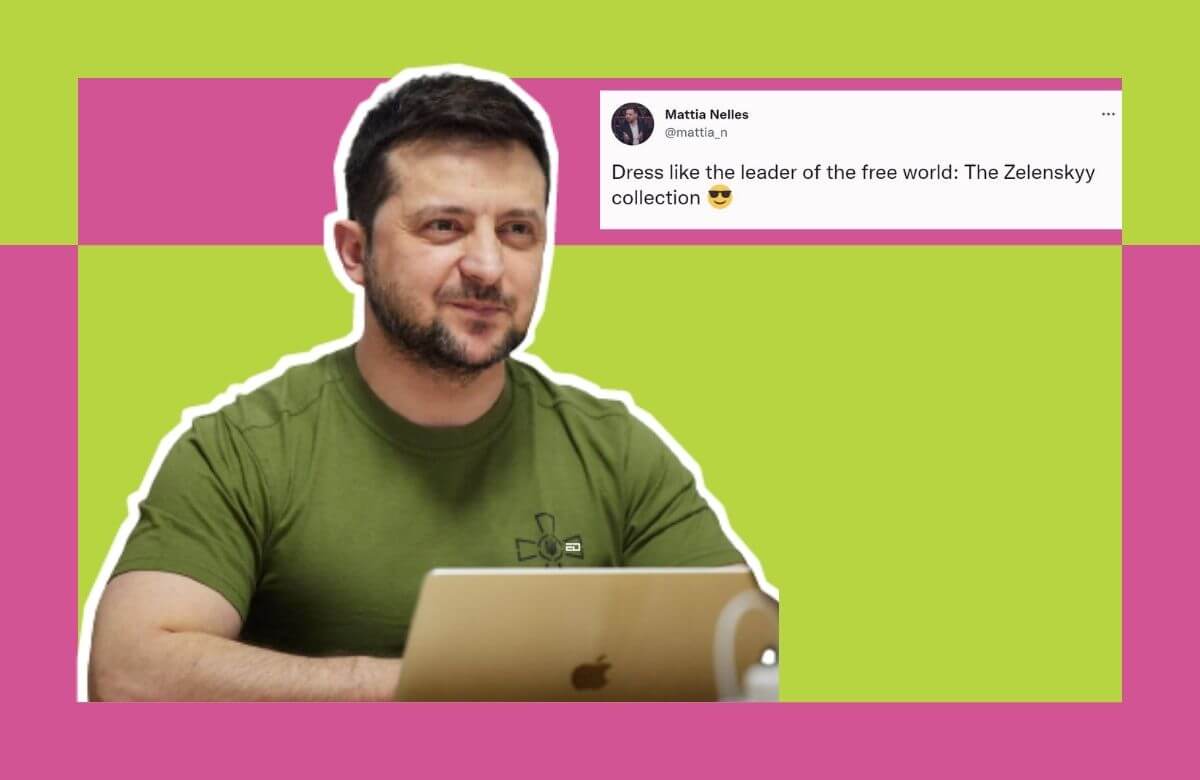 Russia and Ukraine are still engaged in an intense war, Ukrainian cities are being destroyed, people displaced and yet there seems to be no end in sight. In the midst of all this, Ukrainian President Volodymyr Zelenskyy has been quite respected for the way he has been handling the situation.

From getting down on the baselines itself, interacting with affected people, communicating on social media and other platforms in order to show exactly what is happening in Ukraine, constantly asking for help from Western countries and more, Zelenskyy has been much applauded for his behaviour during this time. And while the situation is extremely grave, in the middle of it all, something of Zelenskyy’s has been noticed beyond his political handling of the situation and that seems to be his fashion.

A journalist called Glenn Kates recently posted on his Twitter that “The Zelenskyy collection (shared on TG),” in it he posted an image of Zelenskyy and another of a mood board style image where he put the items the Ukrainian president has been seen wearing since some time now.

It is not just Kates that has noticed Zelenskyy’s fashion, but many users online have been talking about his fashion for quite some time now.

Read More: QuoraED: Which Photo Of The Ukraine-Russia War Broke Your Heart And Why?

One person also commented that “President Zelenskyy’s style is absolute perfection. It expresses his total devotion to his country & says he’s fighting alongside his people for their freedom. It’s practical, functional, comfortable & highly symbolic.”

Interestingly, fashion and politics have for long been interconnected. In this case, Zelenskyy’s run-of-the-mill and extremely casual outfit that any other average person can also be seen wearing has allowed him to connect with the people and create the thought of him and the people being all the same and on an equal level.

In fact, just last month photos of French President Emmanuel Macron came out where he was seen wearing normal street clothes and also unshaven. On March 14th 2022 photos of Macron doing his work in the Élysée Palace while clad in jeans and a hoodie representing a paratrooper unit of the French Air Force went viral.

Many comments were made on how Macron seemed to be taking a note out of Zelenskyy’s book and this look was probably inspired by him. Macron is usually seen wearing formal suits and clean-shaven, so seeing him in a very different look had people talking.

Dr. Kimberly Chrisman-Campbell, a fashion historian and author of “Red, White, and Blue on the Runway: The 1968 White House Fashion Show and the Politics of American Style” also was quoted by NPR commenting about Zelenskyy and what his fashion choices in this time mean.

Chrisman-Campbell stated that Zelenskyy “By wearing T-shirts and hoodies, the youthful, egalitarian uniform of Silicon Valley, rather than suits, Zelenskyy is projecting confidence and competence in a modern way, to a younger, global audience that recognizes it as such.”

What Will The Russia Ukraine War End Be Like: Denizens Speculate