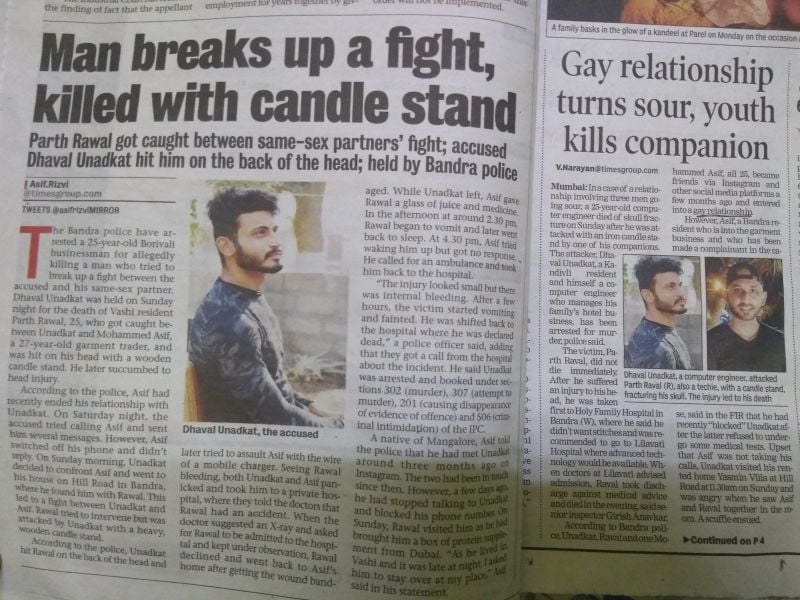 The Mumbai Police have arrested Dhaval Unadkat for allegedly killing a man who was trying to break a fight between Dhaval and his partner.

The story was covered by both Times of India and Mumbai Mirror and both papers covered the story differently.

For readers outside Mumbai, Mumbai Mirror is a supplementary paper for Times of India focused more on the local news. It is, however, still a part of the Times group.

The common gist of the story in both the articles is that there were 3 people involved, Dhaval Unadkat, Parth Raval and Mohammed Asif.

Dhaval Unadkat and Mohammed Asif were in a relationship since 3 months and the latter had recently blocked Dhaval from social media and wasn’t responding to his calls.

The article was covered in Mumbai Mirror (MM) and Times of India (TOI) by different editors and these are the differences in their story: 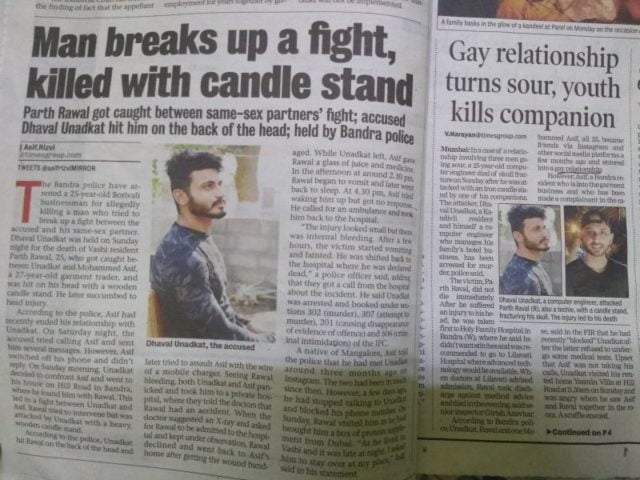 1. The Headline: The TOI headline indicates that this was a lover’s scuffle whereas the MM article indicates that it was an intervention by a third person which got him killed. The title of TOI was very wrong for a different reason which is mentioned later.

3. Residence of Dhaval Unadkat: According to the MM article Dhaval is a resident of Borivali and according to TOI it is Kandivali.

4. The Hospital Theory: The biggest and the most important discrepancy in their article is that after getting hit Parth Raval visited a private hospital. MM claims that he left the hospital and went home but TOI mentioned in their article that after visiting one Holy Family hospital he was advised to rush to Lilavati Hospital.

5. Age of the trio: TOI have written that all the people involved were of age 25 but according to MM Dhaval and Parth were 25 while Mohammed Asif was 27.

6. Police Statements: Both the articles have included police statements but they are different from one another, which means neither of them has used an official statement from the Mumbai Police.

And not just him, a lot of other organizations like Times Now have added the word gay as a prefix to describe scenarios which occur in relationships just to create a ruckus and sell out more.

Don’t we live in India where homosexuality is decriminalized? Times of India really needs to give sensitivity training to their employees. If V. Narayan meant to say intimate relationship and could not recollect the word ‘intimate’ then that is even worse.