One might believe that 19th century Europe, the UK and America were fairly prim and proper in their social traditions. To a large extent, they were, but there was one tradition they practised that comes across as rather macabre and slightly morbid today: the art of post-mortem photography.

Imagine dressing a recently deceased loved one’s corpse, and posing the body carefully, eyes wide open, and then posing nonchalantly beside it for a photo. This was basically the gist of how post-mortem photography was practised.

Previously, before the art of photography evolved, people used to make “mourning portraits,” which were basically realistic paintings of the dead made as they lay in state, and displayed for the mourners.

Post-mortem photography took it a step further- photos of the dead lying in state were common, but even more popular was posing the bodies as if alive. Why Photograph The Dead?

Creepy at best, there were sentimental reasons behind this practice. The idea was to keep one last memento of the dead, to remember them exactly as they were before they died.  Many families used to commission these photographs, and several churches did so too, for deceased members of their clergy.

It was also believed that taking pictures of dead children helped their grieving families to cope with their loss, but this is not recommended by psychologists today. Read More: In Pics: What Famous Indian Royal Families Are Up To Today

While posing bodies sitting on chairs or surrounded by flowers was common, a popular practice in Europe was to take a picture of the body in the coffin, sometimes surrounded by mourners.

Sometimes, a rosy tint was added to the cheeks of the dead, and eyeballs were painted onto their closed eyelids. 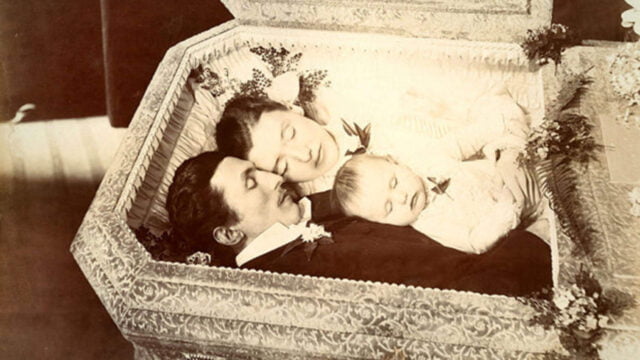 While this practice can be traced back to as early as 1840, people eventually stopped dressing and posing their loved ones over the ensuing decades.

However, post-mortem photography is still practised in America today, albeit to a much lesser degree- it is used by parents who have experienced a stillbirth. A photograph of the parents holding the stillborn fetus is taken for them to honour the memory of the child who didn’t get a chance to live.

Websites like Now I Lay Me Down To Sleep honour such families. Some hospitals in the UK and Ireland also offer to photograph parents with their stillborn child.

Pictures of adults lying in the state are usually not taken during funerals today, as it is considered quite insensitive. However, several celebrities have been photographed after their death, and before their last rites. In conclusion, it can be said that though this practice does come across as strange and macabre, the sentiments behind it can be understood- wanting to preserve the last memory of a loved one, and remember them as they were in life.

Sources: Daily Mail, Wikipedia, Now I Lay Me Down To Sleep

In Pics: The Story Of Kala Bagai: Woman Who Escaped The British Rule Only To Get Oppressed In America