June is celebrated worldwide as LGBTQ+ Pride Month. But for those who do not know its significance, it is a corporate opportunity to cash in on rainbow web icons and accessories and to put up a show of support for the community.

The recognition of June as the pride month stems from the police raid on Stonewall Inn, a gay bar in New York, on 28th June 1969. A street fight arose, along with six days of vehement protest from the American LGBTQ+ community.

In India, the queer community follows the pride month while being aware of the grounded problems specific to Indian society that need to be addressed. In India, we have no memorable event like the Stonewall protest to look up to, hence we borrow from this American incident. History of Pride Parade In India

The first Pride Walk conducted in India, and also South Asia, was in Kolkata on 2nd July 1999. It was also dubbed the Friendship Walk, and Kolkata was the favored venue, being the cradle of several human rights movements like those of feminists, Dalits, the disabled community, child labor, etc.

Owais Khan, one of the marchers, said, “While thousands in New York were celebrating ‘Gay Liberation Day’, can we not do a small pad-yatra?” Following Kolkata, pride marches have been held in Bengaluru, Delhi, Puducherry, and subsequently other cities over the years.

In India, the queer community’s struggle has been engaged within courtrooms as Indian laws traditionally denied them their basic rights. The historic reversal of Section 377 of the Indian Penal Code on 6th September 2018 was a game-changer in terms of workplace acceptance and rainbow stickers and hashtags.

But ground-level social acceptance of queer rights still has a long way to go. In a progressive move, Kochi Metro had hired 20 transgender employees some years back to show its solidarity with the cause, as Parmesh Shahani, author of Queeristan: LGBTQ Inclusion In The Indian Workplace mentioned.

But the Metro authorities soon lost some of these new recruits as landlords in the area refused to rent houses to transgender people. 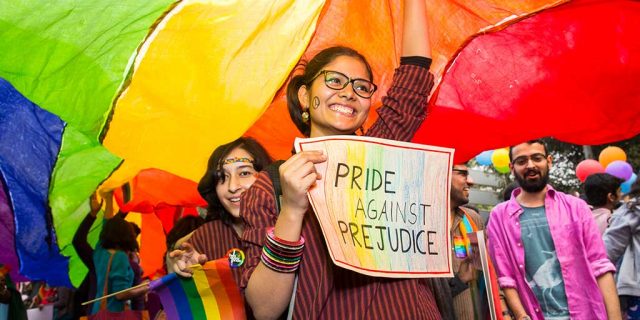 Recently Indian movies have taken to showcasing some culturally specific problems in India. For instance, Badhaai Do is a demonstration of lavender marriage, wherein either one or both of a married couple identify as queer.

It shows how in Indian society official marriages take place for the sake of public reputation and family honor rather than individual emotions and needs.

“Right from childhood, we are made to believe that acceptance from mainstream society is equivalent to upholding family honour. So in the case of serious life decisions like marriage, societal acceptance trumps being authentic to ourselves in order to not taint our family name,” said Aditya Khare, co-host of queer film content review podcast, Booty and the Binge.

The Indian LGBTQ+ community has its own cultural context, and their movement has cultural nuances that do not match with Western stories of coming out, as emphasized by Sandip Roy in Live Mint. We have our own gender-fluid mythological stories to get inspired from, as Devdutt Pattanaik has aptly explored in his book Shikhandi And Other Tales They Don’t Tell You.

Maybe it’s high time that we adopt our own pride month that is rooted in India’s culture and queer history. September might be a good month for it as that is when Section 377 was repealed, a historic moment for India’s queer community, synonymous to America’s Stonewall moment.