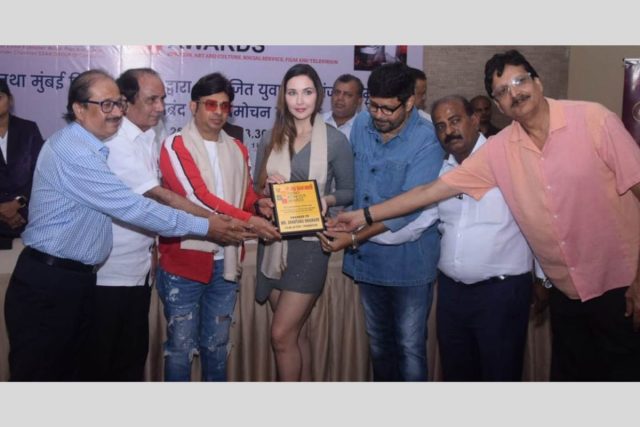 June 16: It was double celebration for Producer & Actor Shantanu Bhamare one was his birthday on 12th June and other was on same day ‘Teri Aashiqui Mein’ Romantic Album Produced by him crossed 1 Million Views!

Whole Team of ‘Teri Aashiqui Mein’ celebrated this success today at Raheja Classic Club, Andheri, West, Mumbai. They had put in 1 Million+ Views written standees in the function as well as they had cut 1 Million Written Cake in the function.

Shantanu Bhamare posted message on all the social media thanking the audience as “Heartiest Congratulations with all my Love and Hugs to all of you for making our Romantic Album Song ’Teri Aashiqui Mein’ Super Duper Hit Song of the Year 2022 which crosses 1 Million Views ! Today is my Birthday and this is the biggest Gift you all have given to me…Love you all …”

Shantanu thanked his Co-Star as “A huge thanks Dear @ellenatutteja_official for wonderful acting & showing our chemistry which is appreciated by the audience, you are too supportive on the sets, enjoyed working with you!”

He also thanked his Director as “With gratitude and appreciation , I congratulate Film maker Rajeev Chaudhari  Ji for designing and directing everything so well for this song ‘Teri Aashiqui Mein’ that it’s become such a big hit and is loved by all ’Teri Aashiqui Mein‘ is a Such a hot hit song because of you and your team … Also Rajeev Chaudhari Ji thanks for changing my look completely, from everyone I am getting good compliments that I am looking like Shahrukh Khan, also thanks for the wonderful Direction! ”

The song is so addictive that audiences all over the world will watch & hear it on various platforms for years!

Other than video it is also released in audio format in 3 flavours, one in duet, another one is solo & International track (just Music) for different flavours of audio. Audio will be released on Amazon Music, MX Player, YouTube Music, Gana, JioSavan, Spotify, Hungama Music, iTune Store, JioSaavn, Resso, SoundCloud, Wynk, and many other platforms.

Shantanu Bhamare is all up to doing different roles let it be serious ones, romantic ones, comedy ones as he trained and multi-talented actor! Many top production houses / banners are inviting him and welcoming him as an Actor / Producer / Co-Producer in their upcoming Hindi Feature Films.

It’s a way to go for Shantanu and we all praise and appreciate his talent, we all are sure is going to change outlook of the Bollywood!

It clearly indicates that Shantanu is a Rising Star in Bollywood (Hindi Film Industry) who is both Producer and an Actor and he is among discussions in Bollywood.

Reviews Brand Voice - June 28, 2022
June 28: Never before have more people been on the move - globalization, work, better economic opportunities or the pandemic have pushed millions to...