In July, the Food Delivery startup Zomato released its IPO that garnered excellent support from people. It was oversubscribed on the very first day, suggesting the positive approach of investors in such startups. These companies are customer-centric, meaning that customer service and satisfaction are their utmost priority.

However, as per past revelations by their employees, these companies may not necessarily rank number 1 when it comes to taking care of their frontline workers, especially delivery personnel. They struggle with meager minimum pay, extended working hours, and no job security, among other things.

Of late, food delivery partners working with Zomato and Swiggy have taken to Twitter to highlight the problems that they face.

The viral posts by @SwiggyDEHyd highlight how workers are not compensated fairly for the high fuel prices, not given long-distance return bonuses, struggle with daily earning caps, and much more. As per The News Minute, the handle is run by a man called Ravi, who started working at Swiggy in 2019.

Apparently, to get out of paying incentives to its employees, it stops giving them orders when they are about to reach their targets. 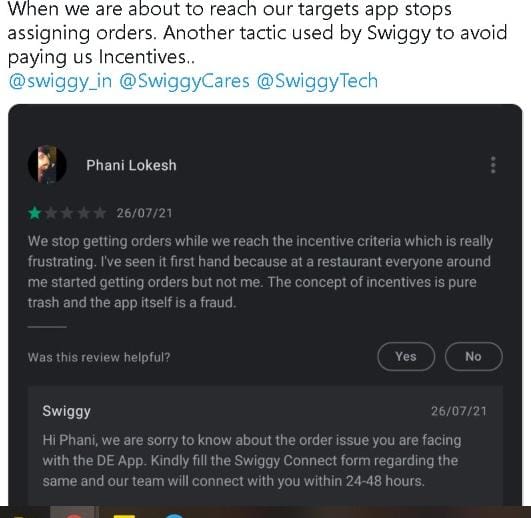 Another user that goes by the handle @tideservices posted a screenshot revealing his daily and weekly earnings asking “How to survive?” Swiggy says that it pays Rs 65 per order, but the real story is different. As per the screenshot, the company pays as low as Rs 20 per order. 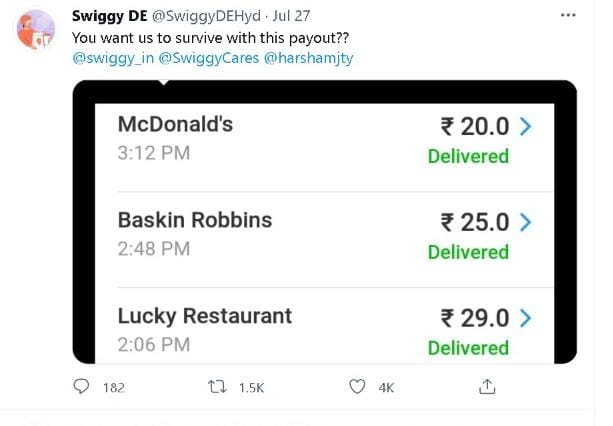 What Swiggy will say:-
Most delivery partners in Hyderabad made over Rs 65 per order last month, with the highest performing partners making Rs 100 per order. @swiggy_in @SwiggyCares pic.twitter.com/aQjr7iGK1F

Yo Swiggy!! Have a look at this. You said I was sharing selective payouts right? What about this? @swiggy_in @SwiggyCares @harshamjty
Stop fooling the customers!! https://t.co/lVNwgjXnJF

The pandemic has crushed the livelihoods of innumerable people. It includes the delivery workers too. “Before corona Swiggy paid Daily, Weekly and Monthly Incentives. They removed Weekly, monthly incentives & Daily MG from April 2020. When we protested they said company is in losses. Now we are getting 20rs/order (6rs/km). Most of the orders are within 3-5kms,” said the tweet.

Ravi says that he used to earn 20-26 thousand earlier but after the pandemic hit, his earnings have come down to merely 15-17 thousand a month even though he is making more deliveries and traveling longer distances than before.

Moreover, the company has apparently extended delivery zones without the consent of workers to avoid paying them a long-distance return bonus. 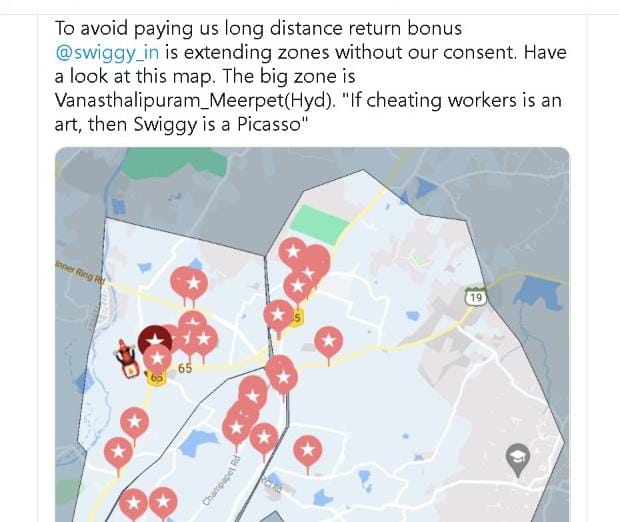 As per one tweet, the worker did not receive the tip intended for him, and he could not even complain about it anywhere.

One time a customer told me that he added 30rs tip but I didn't received it. When I tried to report the issue, there was no option. We can't raise tickets for missed tips or surges/rain surges.
Why @SwiggyTech why? @swiggy_in pic.twitter.com/3fJwoppReb

Another Twitter user, @DeliveryBhoy working with Zomato, voices against how the company treats its delivery executives. 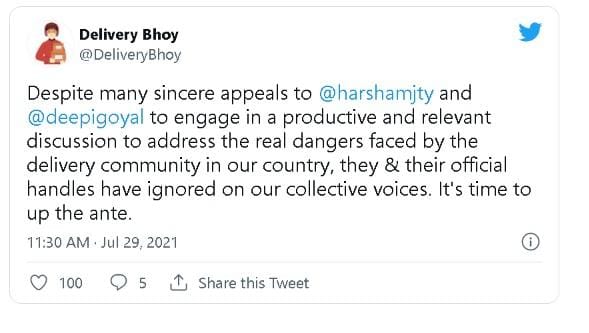 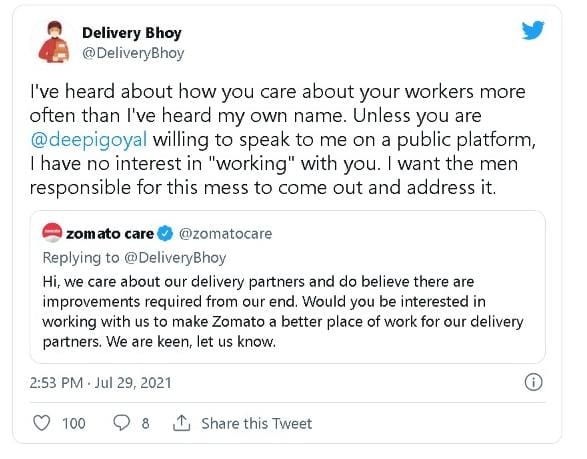 There have been several instances where delivery personnel have died or injured themselves on the road. Road safety is something that every company and individual should comply with. Though the company never explicitly asks the workers to drive fast to deliver orders on/before time, it does incentivize those who deliver them faster than others.

The health insurance earlier was worth 7 lacs which has now been reduced to 5 lacs by Swiggy.

There are many more matters that were brought to light. 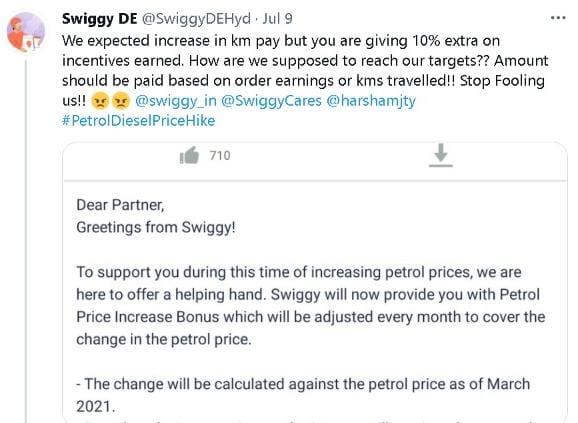 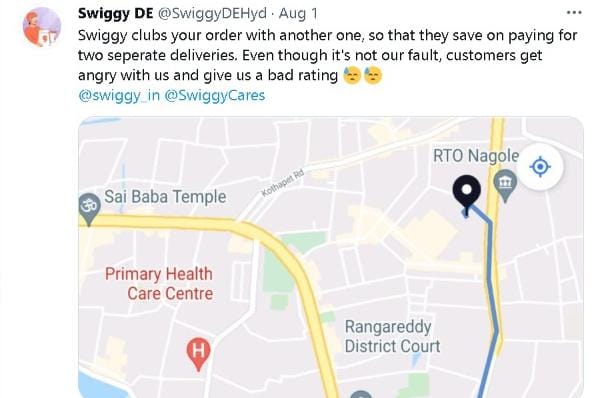 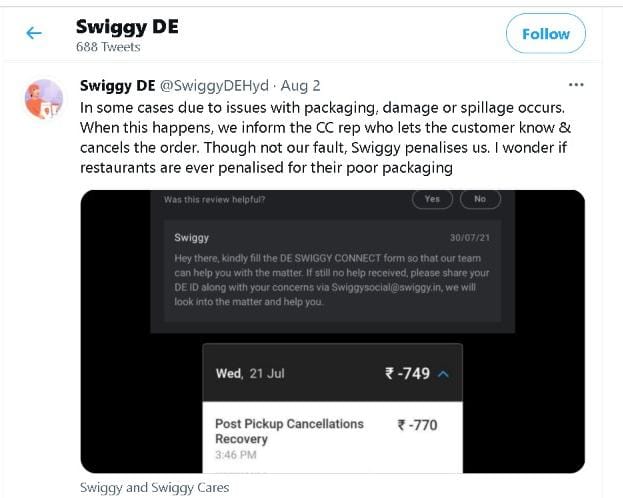 Reaction of Swiggy and Zomato

Both the companies claim that the earnings have not been slumped. Swiggy said-

“Unfortunately, the payouts shared on social media are selective and not representative of our delivery partner’s compensation. It also does not include other major components such as incentives.

Delivery partners are aptly compensated for the distance traveled and delivery time among many other factors and most delivery partners in Hyderabad made over Rs 65 per order last month, with the highest performing partners making Rs 100 per order.

Swiggy maintains an honest approach in enabling a service fee for delivery partners that is sustainable even in the most difficult of times. Additionally, 100 percent of the tips from customers are passed onto delivery partners.”

Both Swiggy and Zomato said that they update their fuel rate card from time to time so that the workers can be fairly compensated for inflation in fuel prices. 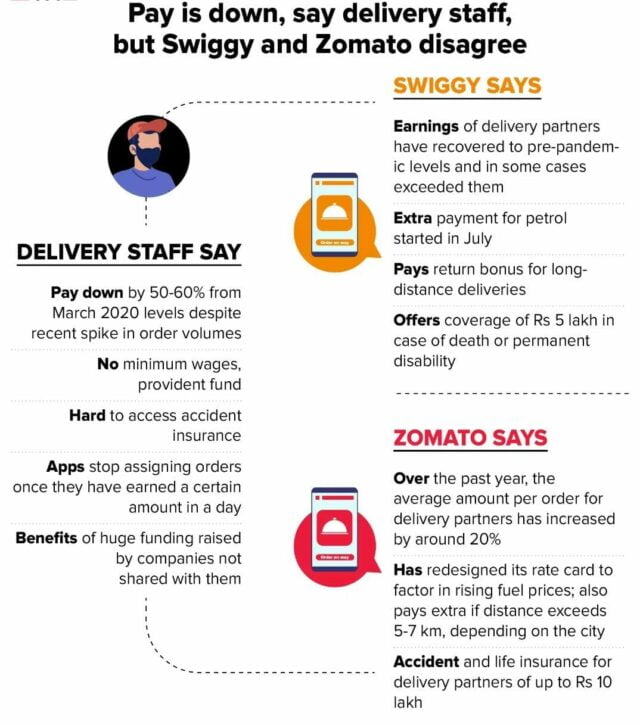 The Twitter handles of delivery partners are bringing this matter to light and pleading with people to take a stand for them. Ultimately, we, the consumers, can bring a significant change in how the companies treat their employees.

When many of us were working from our homes, secluded from the world but safe, these people were riding on their two-wheelers to deliver our food to us. They, like everyone else, deserve benefits, decent pay, and compensation for their expenses like fuel. 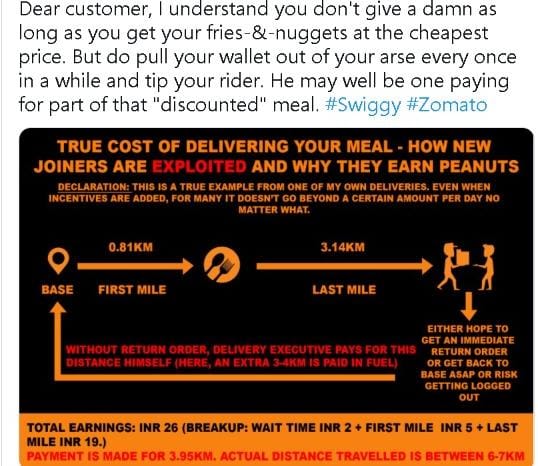 Companies should be held accountable for their actions. Keeping customers at a priority does not mean treating your workers poorly.