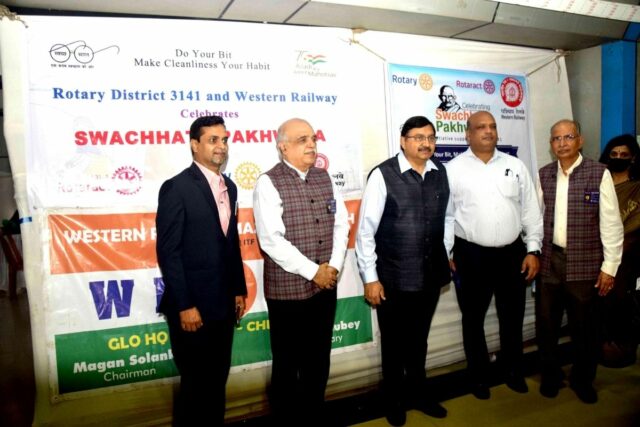 ‘Rotary Life-Saving Express’, a mega blood donation drive across all major railway stations of Mumbai has been organized by Rc Bombay Uptown as Lead Host Club along with over 50 other Rotary Clubs of Rotary District 3141 as Co-host Clubs. This 2500+ blood bottles bags Mega Collection Drive would take place during 15th to 29th September 2021 across all major suburban railway stations of Mumbai. The noble project for the humanitarian cause has been supported by the Central Railway and Western Railway along with their Railway Kamgar Sanghs wholeheartedly,

President Rtn Anup Nathani, along with club Medical Director Rtn Sheela Mane & Team Members of Host club Rc Bombay Uptown were confident of achieving their goal. 100s of Rotarians and Rotaractors (From Churchgate to Virar and CSMT to Thane and Belapur), along with DG Rtn Rajendra Agarwal, Avenue Chair for Disease Prevention & Treatment Rtn Bharat Jhunjhunwala and Rtn Kavita Kulkarni & core team themselves were seen motivating commuters of Mumbai Suburban Rail network to come forward to donate as there is an overall shortage of blood in Mumbai. Rtn Usha Sastry was instrumental in coordination with railways.

Holiday looks for your skin! As the festive season commences, give your skin a makeover too