It’s been 5 years since our honorable Prime Minister, Shri Narendra Modi had announced Demonetisation in India. If you all can recall, Modi said that currency notes of 500 and 1000, which constituted 86 percent of the money in circulation at the time in terms of money value, would no longer be legal tender.

Many political leaders including our former Prime Minister, Mr. Manmohan Singh stated that Demonetisation would have a destructive impact on the Indian Economy and called it “a case of organized loot and legalized plunder.” Demonetisation, according to Rahul, was a “scam.” He said that Prime Minister Modi “informed his close friends” about the currency ban before it was announced.

Despite the frontal assaults, the Modi government stayed firm. But what has changed in India’s economy during the last five years? How much of these changes may be attributed to demonetization? Read more to find it out!

The biggest positive impact of demonetization has been on counterfeit/fake cash, which will have been completely removed from the system. Apart from promoting a cashless economy/ digital currency, demonetization also promised that it would purify the system of illegal cash, forcing individuals who had it to deposit it in banks.

Some economists, including Soumya Kanti Ghosh, the chief economic advisor of India’s largest bank, the State Bank of India, backed this notion.

Following demonetization, the overall number of counterfeit notes found fell dramatically. With fewer counterfeit notes, the potential for terror financing is much diminished. This can be seen in the graph below; the total number of fake currencies declined drastically as we move on from 2016-17 to 2019-20. 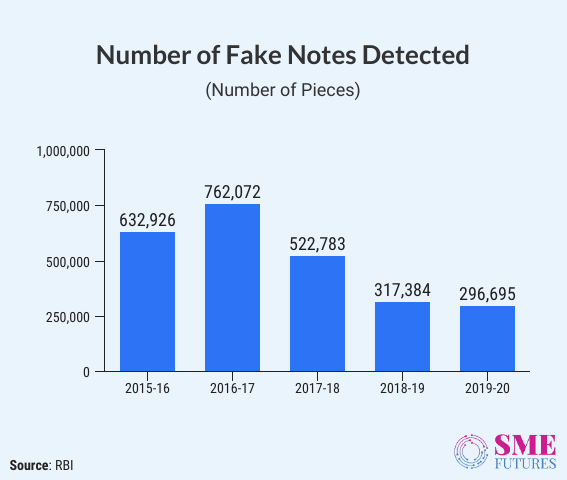 2. The Fall In The GDP Growth

Because of the country’s cash constraint, the circulation of currency has decreased, causing GDP to fall.  This action could also have an impact on GDP creation due to a decrease in consumption demand.

With the pandemic year seeing the biggest ever GDP decline of 7.3 percent in 2020-21 and a large base effect in GDP statistics for 2021-22, it has become very difficult to estimate the post-demonetization effects. 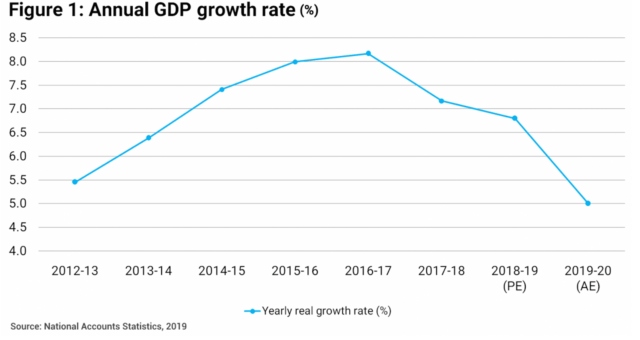 3. The Effect On Banks And Financial Institutions

The consequences of demonetization on banks were both positive and negative. However, in the long term, it was more beneficial.

The printing of the Rs. 500 and Rs. 1000 notes were terminated, and a new Rs 2000 note was released. The country was in turmoil in the weeks that followed the declaration.

People were waiting in large queues in front of banks and ATMs to exchange and withdraw cash. It was a complete shock and a chaotic scenario in India, which is essentially a cash economy with the majority of transactions taking place in cash.

Also Read: A Failed Demonetization And A Rain Of Gold Coins: A Reign Of Misgovernance And Strange Economic Policies

Furthermore, the demonetization was limited to Rs 500 and 1000 notes, which constitute 86% of the real currency in circulation. In the short run, this resulted in a liquidity crisis since many institutions were unable to exchange cash owing to a lack of funds.

According to research done by the Reserve Bank of India, the economy’s regulator, 15.30 lakh crore banknotes have been demonetized.

People were made obligatory to deposit their money in banks, which had enhanced the liquidity of the banks in the short term. Banks can utilize this liquidity to lend to customers in the long run. 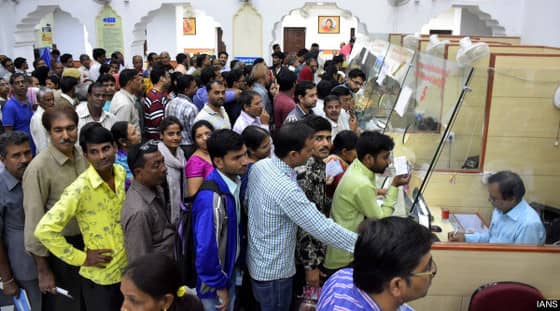 Demonetization has had an impact on the purchasing power of consumers. This mostly affects long-term investments such as real estate, vehicles, and the cement and steel core businesses. The stock values of firms in these industries will suffer as a result. Consumer purchasing power is also impacted by cash shortages, as cash accounts for 90% of transactions in the Indian economy.

With cash transactions on the decline, demand for other means of payment has increased. Digital transaction systems, E-wallets, online transactions utilizing E-banking, the use of plastic money (Debit and Credit Cards), UPI, EFTPOS, Net Banking Aadhar card, and other methods of money transfer have become the norm. 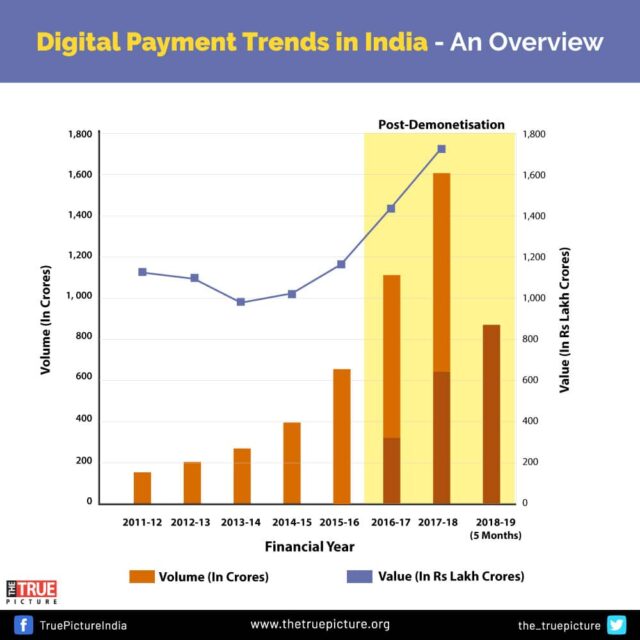 In October 2021, the value of transactions over the Unified Payments Interface (UPI) crossed $100 billion. UPI was first launched in the country after demonetization, and its quick rise has been genuinely phenomenal.

This is a global-scale and high-quality invention for the Indian Economy and has eventually led to the strengthening of such systems and the necessary infrastructure.

In the long term, demonetization has both beneficial and bad consequences, but the negative consequences do not exceed the favorable consequences. The government’s decision to demonetize old cash and replace it with new currency caught the country by surprise. The decision was made in response to the threat of illicit money, counterfeit cash, corruption, and terror funding.

The move to demonetize the previous currency was a step toward eradicating unaccounted money from the Indian economy. Demonetization has made significant inroads into India’s digital payment system.

People are getting less fearful of technology and more at ease with the digital world with each passing day. It might be a step toward a cashless economy. Demonetisation has brought a new way or style of cashless payments in the country.