Note: All comments and conjectures made are in light humor and reader is requested to kindly spot sarcasm wherever used.

It’s the month of February. And I’m sure you poor little pitiful people have already come across this schedule. And if you haven’t, I salute you. But read on because I further want to spread agony, err, I mean, love.

First I thought it was just Fenruary 14 which was to be dreaded but then came along its preceding days. And when I thought the agony ended there, I was enlightened with its succeeding week of jack shit!

Not aiming to mock the valentine weeks here (though it’s becoming harder to resist), I shall try and analyse the logic and rationale behind these days.

So it all starts with a rose. The guy presents a rose (preferably red) to the girl and she accepts it with all its thorns and fake dew out of general polite courtesy.

The guy clearly gets a wrong signal and directly moves on  and progresses to proposing to the girl. She’s a smart woman and knows there are goodies in store so she keeps him hanging with no answer as of yet.

The guy now goes all in to woo the lady. What better way to her heart than through her stomach and technically, her brain’s oxytocin? Chocolate, it is! No woman says no to chocolate, especially dark chocolate. It’s also an aphrodisiac, or was that the ulterior motive all along?

Next, the guy cleverly tries to tap into the girl’s childish and gullible side by gifting her a teddy bear! She sleeps with the teddy at night because it’s too soft and that’s what the guy wanted, an entry into her bedroom. For the teddy, of course.

The woman gets insecure and wants assurance now. So she asks the man to promise her that he won’t leave her or that he’ll love her or any other demand the queen wishes to make. Interestingly, the promise is made before things get personal. Still traditional, I guess, eh? The guy obliges docilely.

And then comes the quintessential hug which melts their hearts and evokes lovey-dovey feelings and a craving for something more. We all know what’s next in store, don’t we?

It’s kiss day and the guy and the girl are supposedly together now because that’s what social protocol calls for and this day needs explanation no more. Let’s give them some privacy, please! VALENTINE’S DAY is here and it calls for a repeat telecast of basically everything that happened in the past one week. Romantic dinners, lovely gifts, thoughtful gestures are all that the girl expects from the guy and he readily and willingly gives in to her demands because he’s such a perfect gentleman? Well, far from it. The guy, in all probability, screws up somewhere in something and the girl ends up being really mad at him.

Which calls for the exciting slap day which is a spill-over from the previous day’s wreckage. The guy pays for messing up Valentine’s day and the girl has a change of heart.

A slap is not enough for the girl and she believes the guy is worthy of her kick too! So, yes. The girl showers the guy with some more physical violence before calming down.

The guy is now in a fix. He needs to make amends. He needs to convince her that he’s still into her. What does he do then? He buys her a perfume! And courtesy the infamous Axe and WildStone advertisements, she smells her way back into him.

Then ensues some casual flirting as they rekindle their naughty endeavours and let sparks fly.

But the sparks were too volatile and the girl, as moody as she gets, shocks the guy by making a confession. The guy doesn’t believe it and refuses to accept what she said.

He then tries to emotionally blackmail her and tell her how much he misses her to win her back by tapping into her emotional side.

But the girl turns out to be cold and calculative and decides to break-up with the guy. And refuses to return the teddy bear. And the rose. And the chocolate. Wait, she already ate that.

And then the guy wait another year for Valentine’s week for another chance at luck but men don’t ever learn, do they? This is the actual reason behind the two weeks of Valentine. If you thought it was about true love and making your loved one realize the value of their love, nah, think again.

“You can’t put a price tag on love. But if you could, I’d wait for it to go on sale.” — Hussein Nishah 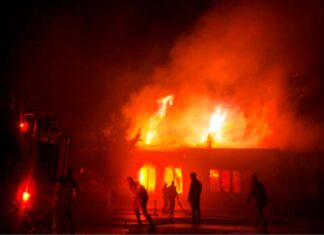