On 6th and 7th April 2019, the worldwide BTS Love Yourself World Tour was at its last destination, that is Bangkok, Thailand.

The tour by the world renowned boyband, BTS or Bangtan Sonyeondan or Beyond The Scene had its 7 members, RM, Jin, Suga, J-Hope, Jimin, V and Jungkook travel across the globe from US, UK, and various places in Asia.

Bangkok was the last destination before the entire end of the Love Yourself era and the launch of their new album and new era.

I’ve been a fan of BTS since almost 2 years now, and I genuinely never thought I’d be able to see them. However, after some coaxing from friends, I did decide to check out the prices of the Bangkok concert just to see how much it will be.

I’d been burned earlier when I tried to book tickets for their London concert where the tickets just started from Rs. 20,000 and that too for seats where BTS were practically ants for the viewer.

So it was a big surprise when the floor seats for the Bangkok LY concert costed just about Rs. 15,000.

Floor seats for those unaware are pretty close to the stage and you can see the artists easier than compared to seats that are farther away.

Since it was my first ever concert, of my life, I decided to recount a step by step look at the entire process.

The first thing was to book the tickets, and make sure you book them in time so you can select a good seat as well as from the official seller.

I bought mine from ThaiTicket Major which was the official ticket seller for this concert. Some people did buy some other areas but encountered problem later on when it was announced their tickets might not be valid if not bought from ThaiTicket itself.

After all collecting all the documents for the ticket, in case you used someone else’s credit card, you will need the signed Power of Attorney and more, and the visa documents, I was all set.

I chose to attend just one day, that was the 7th April concert, however, a lot of people attended both days. 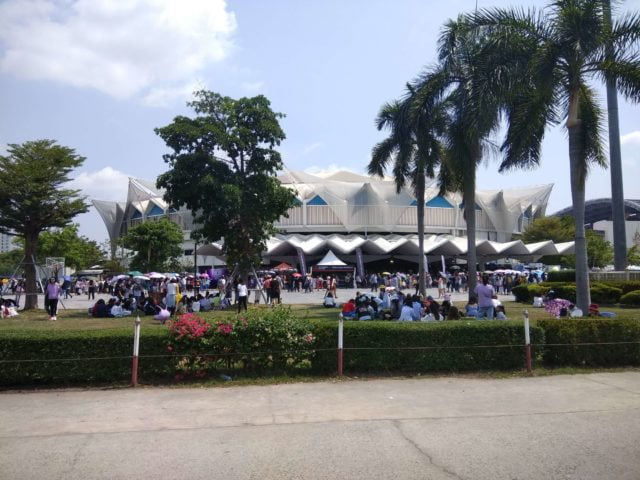 The concert was held at the Rajamangala National Stadium, which has a capacity of around 50,000 people. 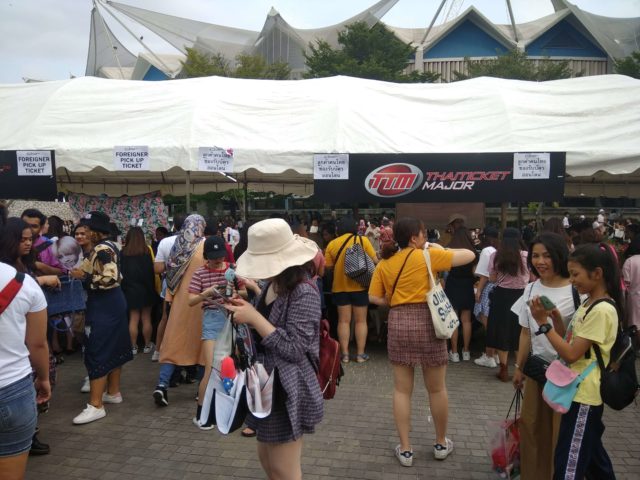 The most time-consuming part was the ticket and merchandise (merch) lines. While the ticket lines did get short around afternoon, the merch lines went on for hours. 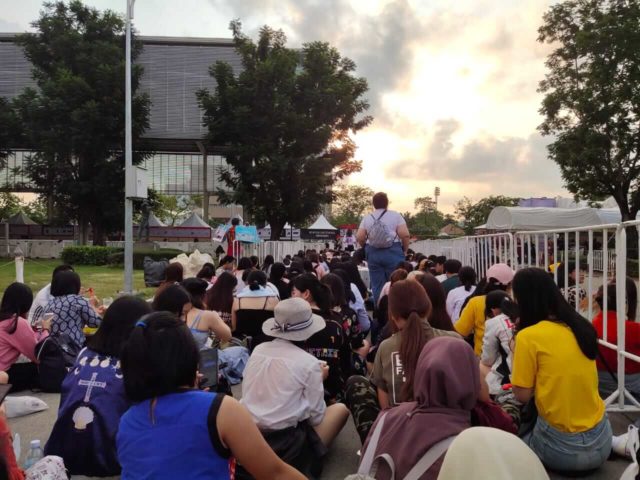 This image was clicked by Christy, an Indian ARMY who was also there, at around 5.30 in the morning. I had to stand for at least 2 hours in line, which was comparatively shorter than those who stood for almost 4-5 hours to get their merch.

Oh also, a tip, the merch people here did not accept credit card, so we had to carry cash for whatever we wanted to buy. 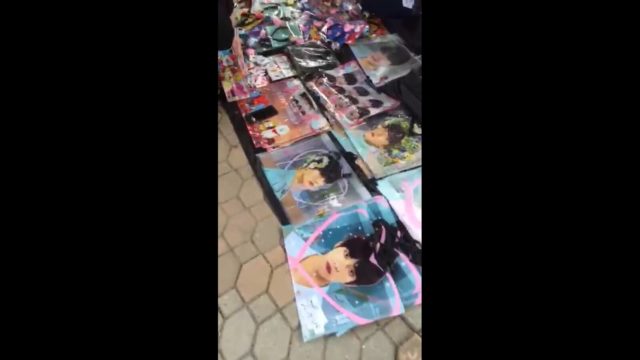 To be honest though, the only thing I’d suggest buying from the official merch area would be the ARMY bomb/official lightstick.

You can even take the express line here without any extra charge, and then get it connected with the Bluetooth that will automatically operate the lightstick. 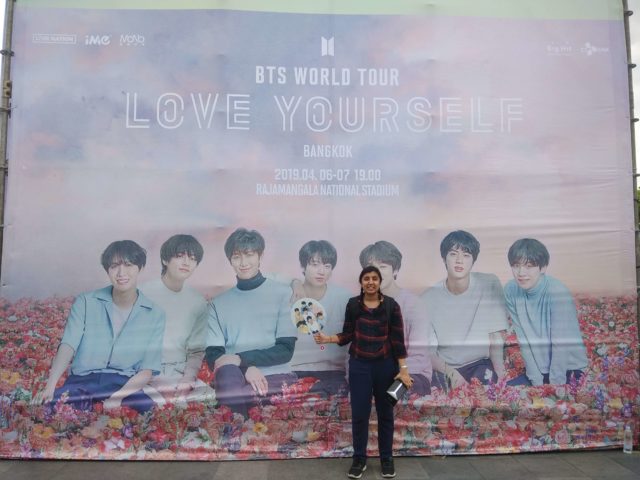 This me after a long and tiring day of standing in line, waiting for an ATM to withdraw cash, getting both my ticket and ARMY bomb and just waiting for the concert to start. 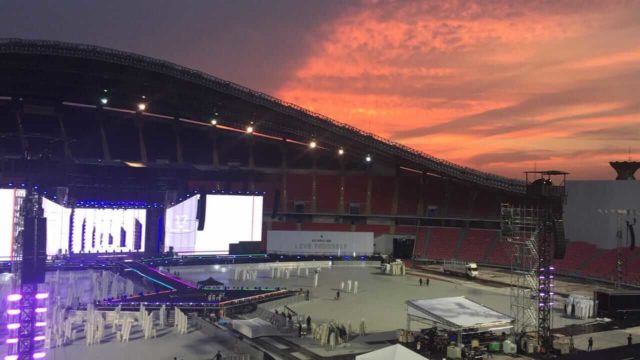 Christy also sent this image of the inside of the venue just a day before the concert. 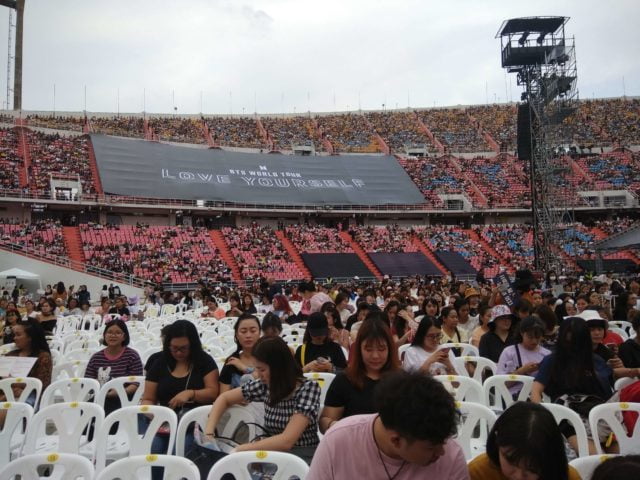 And this was the next day with ARMYs from all around the world quickly filling the stadium.

Read More: Fake Friendly Fridays: BTS Talks About Their Visit To India And Takes The Stage 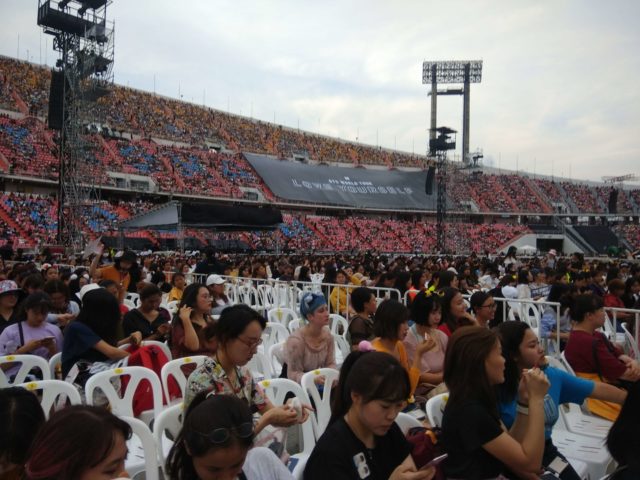 There were a lot of officials standing around to make sure you reached your seat properly, without getting lost. 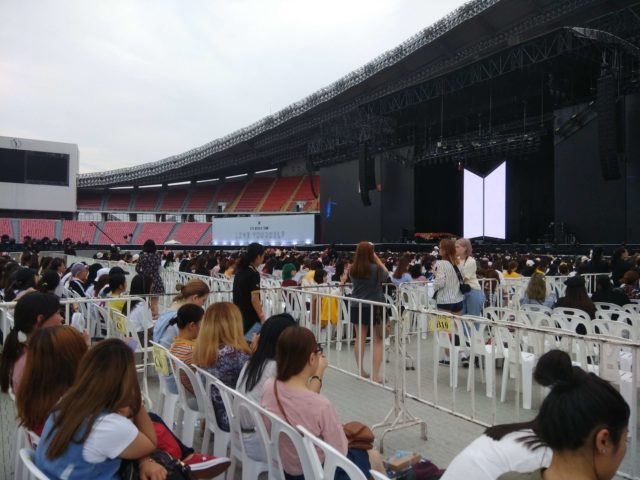 This was the stage, at this point it seemed calm, but quickly the entire mood of the stadium had changed.

Here are two visual samples as to how epic the concert really was from another two Indian ARMYs, Anusha and Mona.

These are just brief snippets of how exactly it felt to be in the middle of the concert with ARMYs singing and jumping and dancing.

Midway through the concert, it started to rain, but somehow, instead of being bothersome it only added to the whole experience.

RM and Jimin’s solos, Trivia Love and Serendipity respectively were both performed in the rain. And as long as the artist was having fun, so were we. 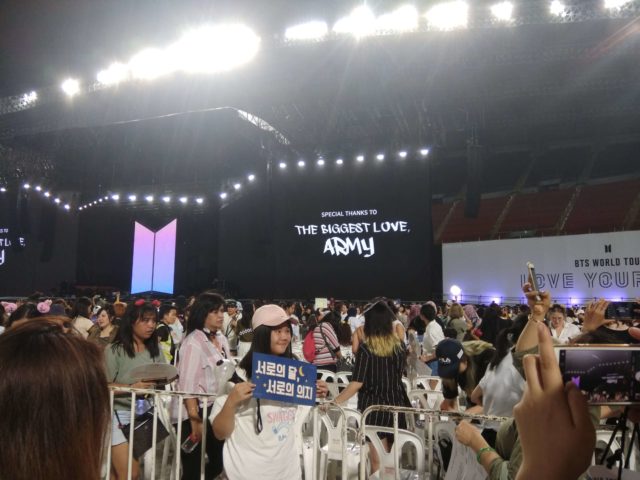 A sweet message by BTS at the end of the concert. The entire thing went by in the blink of an eye. I also had the pleasure to meet ARMYs from around the world, in this image itself there was one from Malaysia, some from Philippines, and one from India. 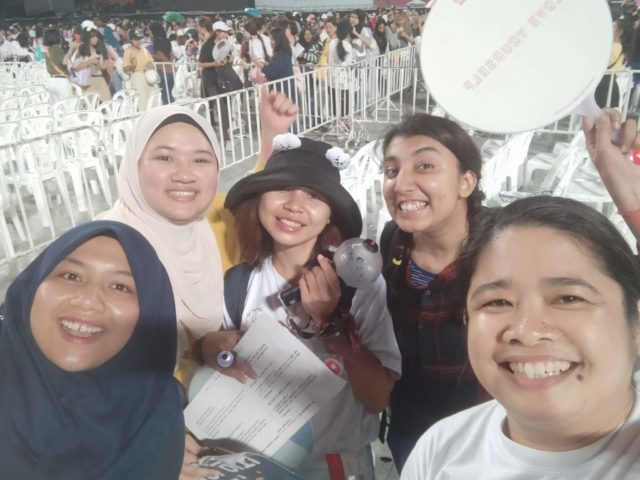 To be honest, I could not have picked a better concert to attend for my first time.

While some International ARMYs did comment on how certain locals were a bit rude to them, I, fortunately, did not have that kind of an experience.

In fact, Thai ARMYs were quite nice and helpful to me, a couple of them translated some banners and notices for me and one of them even helped me get my cab back to the hotel.

One thing I will say with utter and complete conviction is that BTS are some of the best performers in the world right now. They know exactly what their audience demands and do everything in their power to make sure that the fans have one of the most memorable experience of their life.

At no point during the entire concert did I feel any discomfort or just felt like I wanted to go home. The energy was always kept at a 100% by both the ARMYs and BTS themself, where you constantly are a part of the whole concert.

Even during the ARMY time, a few minutes of break before the encore, the fans still kept going on with fanchants, singing songs and when their ARMY bomb was not working, we all switched on our flashlights and waved it around.

Another thing that I observed from the concert was how much of an interconnected relationship is there between BTS and ARMY. Both of them derive energy off of each other and it was wonderful to be in the midst of it all.

For anybody who has the means of going to their concert but is confused, don’t be at all. It will be a great experience no matter what.

From Insecurity, Suicidal Thoughts, And Mental Breakdowns, The BTS ARMY Reveal Their Growth With The BTS Persona Challenge